On the blog today, author Barrett Tillman introduces us to his new book 'When the Shooting Stopped: August 1945'. 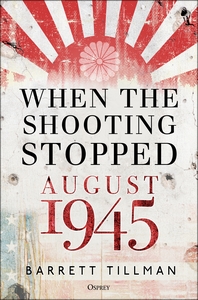 Three of the most enduring images of World War II occurred within days of each other in 1945: the mushroom cloud over Hiroshima, on August 6; the iconic kiss in Times Square, on August 14; and the victory flyover of Tokyo Bay on September 2. Together, they represent one of the seminal months of the 20th century. August 1945 shaped the world as perhaps no other month beside August 1914, the start of the Great War.

I knew after my books about the Marianas Turkey Shoot (Clash of the Carriers, 2005), all air operations over Japan (Whirlwind, 2010), and the Mediterranean Theater (Forgotten Fifteenth, 2014), that it was increasingly difficult to find marketable topics for World War II that had not been published. Therefore, I fell back on what I grandiosely call “negative market analysis.” What has not been written, or what justifies a new treatment?

August 1945 leapt to attention – a defining period in 20th-century history. The events that month and immediately thereafter still influence our world, and an understanding of the VJ Day era helps place today in context for those who care to study it.

In 1984, prolific British historian H.P. Wilmot wrote a global survey of June 1944, with significant events on both sides of the world (Normandy, the Marianas, Burma, etc). My own D-Day Encyclopedia was published in 1994, and then again in 2014. But I found almost nothing devoted to August 1945. Some excellent, detailed accounts of the Pacific War naturally cover the end game, notably from John Toland (The Rising Sun, 1970), Richard B. Frank (Downfall, 1999), and Sir Max Hastings (Retribution, 2007), and Ian Toll’s concluding Pacific study (Twilight of the Gods, 2021). Currently, Frank is writing the second of his Asia-Pacific trilogy, splendidly begun with Tower of Skulls (2020).

When the Shooting Stopped reminds us that history is a journey more than a destination. It began with a 1990 magazine article, “The Day the Shooting Stopped,” describing U.S. Navy combat on the last day of hostilities, August 15, 1945 (Western Pacific date). Subsequently I built on that foundation, expanding coverage to the entire month.

The cast was large and varied, from national leaders Truman, Churchill, Stalin, Gandhi, and Hirohito to U.S., British, Russian, and Japanese sailors and fliers at the sharp end of combat. Also included are thousands of prisoners of war and detainees facing an uncertain future, often overlooked in broader studies.

The VJ period offers authors scenarios rich in variety. Aside from the atom bombs and US-UK fleet operations, conflict spread on the Asian mainland. Nationalist and Communist Chinese forces fought the Japanese, setting the stage for the four-year civil war. Meanwhile, Russia launched a massive offensive into Japanese-held Manchuria on the same day that Hiroshima was bombed. It was the third time Tokyo and Moscow had crossed swords, breaking the “tie” of Japan’s victory in 1905 and the USSR’s in 1939.

Aircrew and sailors in the Western Pacific were caught in a time warp on the morning of August 15. Hundreds of B-29 bombers were returning from their nocturnal missions over Japan when crews heard the radio announcement of Tokyo’s surrender. At the same time, carrier airmen were inbound to targets when they were belatedly recalled.

I knew several naval aviators who flew that morning, and some were caught between Tokyo’s announcement and the broadcast to Allied forces in the Asia-Pacific realm. As one later wrote, “It brought all the joy and unreasoning happiness that we would live and not die.”

However, some did die, either in belated combats or murdered by vengeful captors. Those tragedies are also a part of When the Shooting Stopped.

Civilian accounts of VJ Day are part of the story as well. They range from horror at the irradiated rubble of Hiroshima and Nagasaki to joyous outpourings around the world, most notably the huge gathering in New York’s Times Square with the iconic image of “the kiss” that resonates 77 years later. But often overlooked are Western internees in Japanese captivity from the Home Islands to China and the Dutch East Indies. When the Shooting Stopped provides first-person perspectives on all those and more.

Among American civilians I recalled a long-ago account from my mother, who in 1945 was an Oregon rodeo princess. She saw the exuberance of Navy pilots violating a variety of regulations, then partying without concern for officialdom.

Despite the passage of nearly 80 years, there are still lessons to be learned from August 1945 and how they apply to our present world.

Most of the controversy over Japan’s unconditional surrender and the atomic bombs occurred in an information vacuum for decades. With declassification of diplomatic and military documents, a far greater understanding of the U.S. and Allied decision-making process is possible, and this is explained in When the Shooting Stopped.

Whatever the era, living history has a shelf life. Anyone interested in a particular period can benefit future historians by interviewing and recording the experiences of those who lived the events. “Do it now.”

“The Greatest Generation” mantra has become reflexive since Tom Brokaw’s 1998 book of the same name. When the Shooting Stopped objectively examines World War II in the context of previous generations, especially America’s founders who faced immensely greater challenges. Nevertheless, “the VJ generation” returned dozens of countries to their rightful owners, and that in itself was “great.”