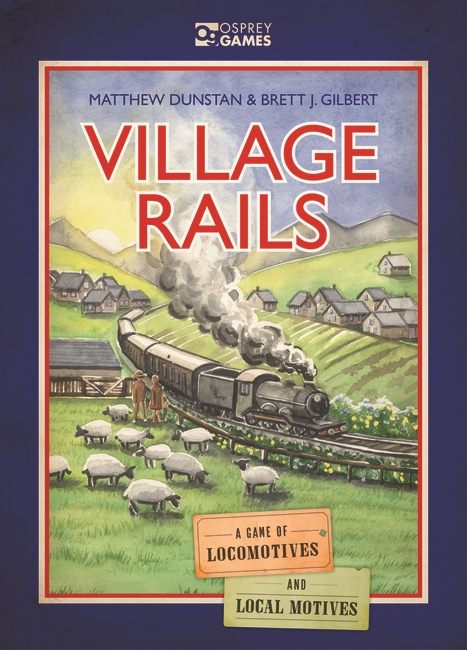 Village Rails is a 2-4 player card game of trains, tracks and tricky decisions from award-winning design duo Brett J. Gilbert and Matthew Dunstan. Ahead of its release at the end of September, we spoke to Matthew Dunstan about the design process that resulted in this puzzly tableau-building game…

I love games that pack a heap of meaty decisions into a tiny product – especially card games, where formats as lean as 18 or even 8 cards can be turned into rich, replayable experiences, such as Love Letter or Circle the Wagons. Even comparatively larger games such as Race for the Galaxy or Innovation still manage to stick to only cards and count amongst my favourite games to play.

Brett and I have made a lot of different games together, but we frequently return to card games, and consider how we can elevate such simple components to create new and engaging experiences.

This desire can be seen in several of our previous co-designs, including Pyramids (construct a pyramid and obelisk with cards), Great City of Rome (construct a city with cards in a square grid), Raids (construct a longship with cards) and Junk Forts (construct two parallel walls with cards). I like to think that all these games sprung from a combination of my love for strategic card games and Brett’s love of tableaus and emergent geography, such as that found in his favourite game, Carcassonne.

The origin for Village Rails was born of the same set of instincts: this time put to work to make a route-building card game, but with lots of variety and combinations to explore. 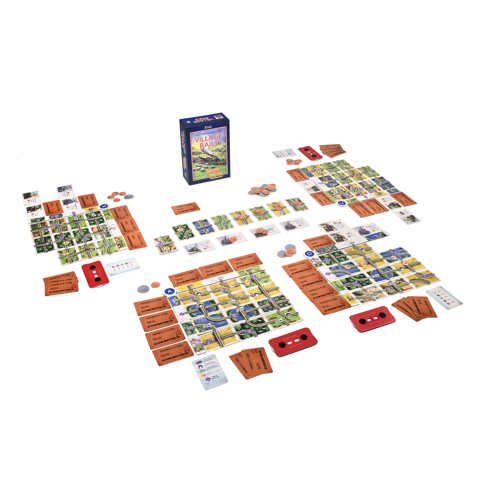 In July 2018, I had the idea to map railway tracks onto cards laid in a grid, with each card showing a pattern of tracks that would connect to adjacent cards and organically create a snaking railway network within each player’s tableau. Additionally, with an eye to component thriftiness, we could also use the backs of the cards to include a wide variety of ‘engines’ which would encode different player objectives that could be played to supplement and combine with the tracks’ various features.

These elements — the double-sided cards with tracks and engines — would prove a strong core for the game, and survive the entire design journey: a rare feat when the more usual outcome is scrapping 80–90% of the first prototype!

Spatial elements that combine in multiple ways can be tricky: both to design robustly, and to play, since they can baffle players who may find it hard to ‘see’ all the possibilities — never mind choose between them! We had already made the decision to use rectangular cards, limiting the rotational degree of freedom to two orientations for each card, but it was still collectively a bit too much to unpick. Brett quite rightly pointed out that it could probably all be just one notch simpler!

So, we reduced the multiplicity of track patterns to just two: a pair of tracks which went straight across each other, and a pair of tracks which each turned 90 degrees. This immediately made the choices much easier to analyse, and brought the game more in line with the weight we were aiming for, and much closer in feel to what we thought players would expect of a game of this style and scale. 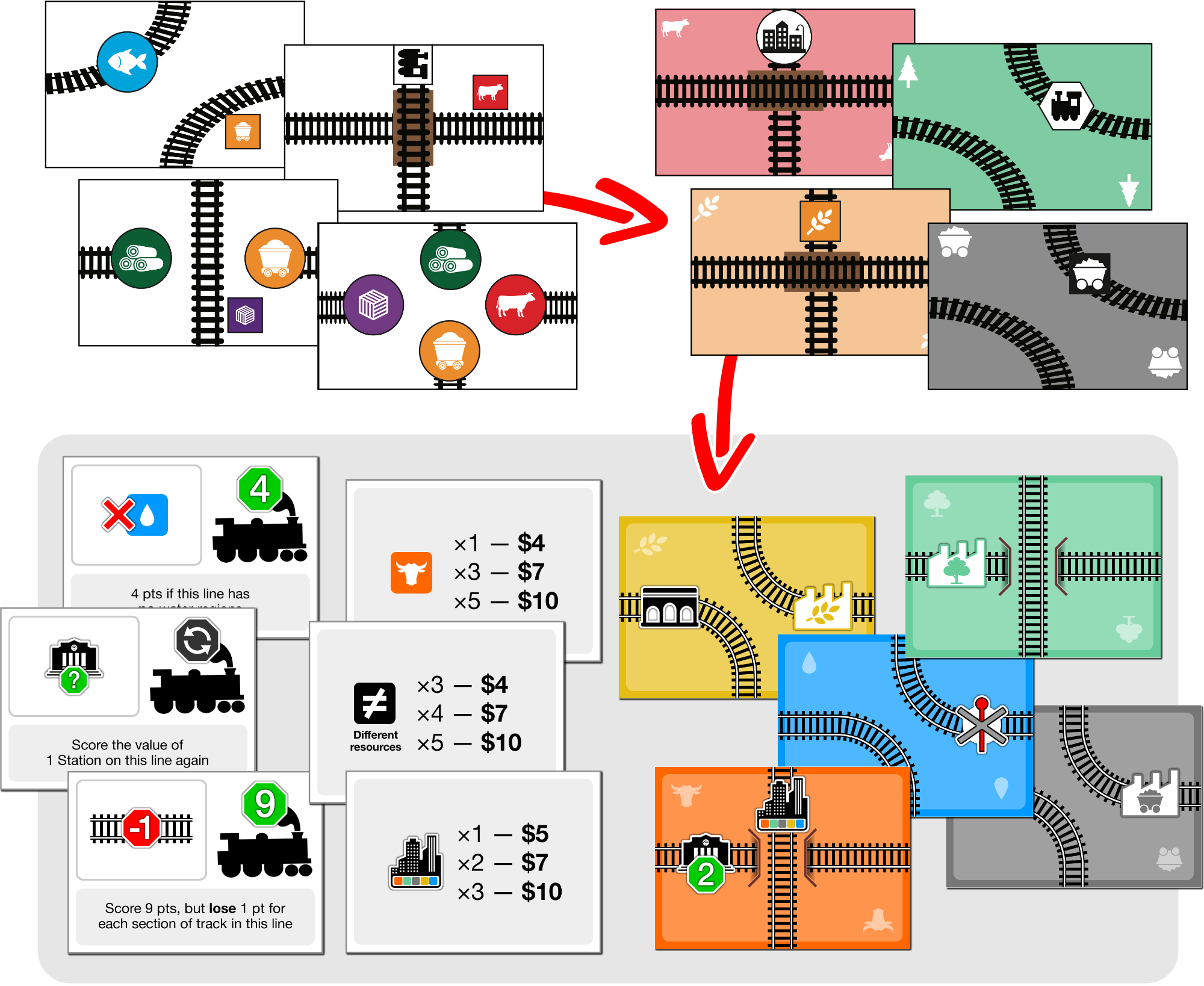 The simplification of the track patterns meant that individual railway lines could never connect to each other within the tableau, and that the 7 lines that each player began the game with along the top and left-hand edges of their tableau would always remain separate. This rationalisation opened the door for the next step on our design journey.

I don’t remember who had the idea, but we thought to reinforce this new feature of the geography (that each line would now naturally end on the bottom or right-hand edge of the tableau) by adding new ‘terminus’ cards that players would play as each line was completed, giving them some points — but also punctuating the game with clear moments of completion and achievement. Later, this would evolve to paying out money rather than points, which neatly reinforced the timing and importance of the small economic aspect of that game that players used to select new cards and pay for additional engines. 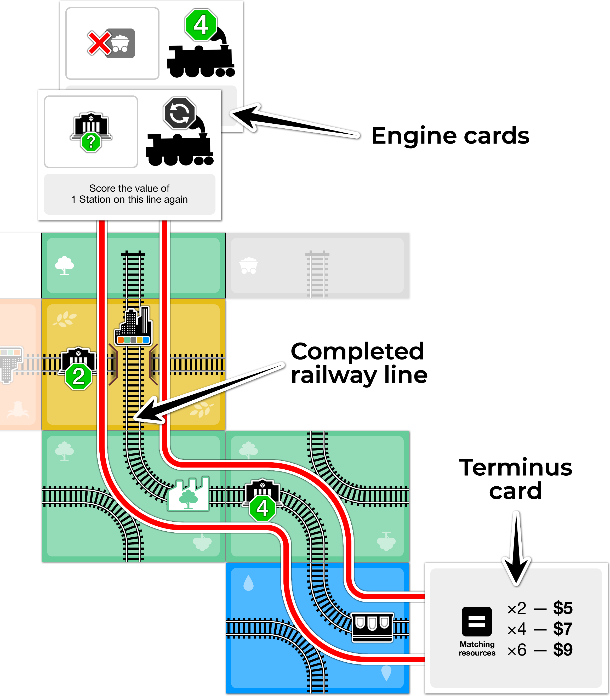 The rest of the design process was iteration: deciding on the specific mix and meaning of the cards and the icons that could appear on the tracks, and honing the abilities and values of both the engine and terminus cards. Start to finish, the whole design was done in about 4 months — just in time for us to take it to Essen Spiel in 2018 to begin the process of finding a publisher.

In contrast to the speed of design process, the next stage took far longer. Lots of publishers enjoyed the game and commented on its potential, but none wanted to take the next step and actually sign it! So, after a year and a bit of pitching, we put the game back on the shelf and decided to let it sit for a while. Of course, by this time it was early 2020 and we couldn’t have predicted the impact the pandemic was going to have on travel, game conventions, and our opportunities for pitching face-to-face!

In early 2021, Osprey Games reached out and asked us whether we had anything new to pitch to them, and we ended up showing them a number of games, amongst which was a hastily put together virtual edition of Railway Rivals as the prototype was then called. We gave the Osprey team access to a number of prototypes, and settled back into the usual mode of waiting several months for feedback — and most likely rejection. This is the way.

But we were wrong! We only had to wait a week for the feedback, and Osprey didn’t reject the game, but instead wanted to publish it! 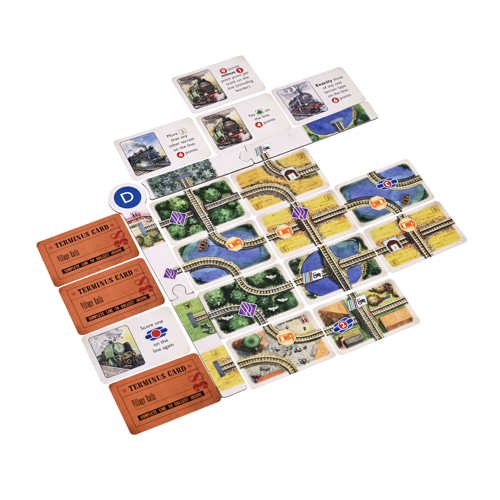 We have been thrilled to see the direction in which Osprey chose to take the game, especially in terms of the illustration and product design. They saw a possibility for it to fit alongside Peer Sylvester’s excellent Village Green, with a similar painterly, bucolic art style, and a similar intent of squeezing a satisfyingly crunchy experience into the smallest of boxes.

The art by Joanna Rosa is gorgeous, and, when combined with graphic design reminiscent of classic British railway posters, gives the game a rich sense of time and place.

But my favourite part has to be the best tagline I have ever had written for one of my games: “Village Rails: A game of locomotives... and local motives!” Absolute genius.

Village Rails is out September 29th and available for pre-order today.