On the blog today, author Neil Grant introduces us to his recent series title 'Tiger vs Churchill' and talks about what inspired him to focus on Operation Jupiter. 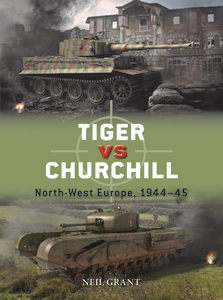 When I was asked to write the Tiger versus Churchill book for the Duel series, there were a couple of things I didn't want to do.

The first and most obvious point was that both the Tiger and the Churchill had been covered in Osprey books before, and I didn't want people to read the new Duel series title and feel it just re-hashed information they already knew from previous books. To be a worthwhile addition to the series, this book had to tell the reader something those previous Osprey books hadn't.

The second thing I wanted to avoid was the “top trumps” approach that assumes the tank with the biggest gun and thickest armour is always best. The reality of armoured warfare is more complex, or the German 1940 blitzkrieg into France would have been shattered as the flimsy Wehrmacht Panzer Is and IIs were torn apart by better armed and armoured French Char 1s and British Matilda IIs. Many other considerations have as much or more influence on the outcome, including crew training, tactics and even logistics, and I wanted to help readers understand the impact of these.

The third and final point was to remember that the two vehicles were not designed to do the same thing. While the Tiger was originally developed as a breakthrough vehicle, by Normandy it was primarily being used as a tank killer. Its powerful 88mm gun excelled in this role, though ironically the long 75mm/L70 used on the Panther would have been equally effective at a lighter weight. Indeed, what ultimately became the Panther turret was originally developed as an alternative turret for the Tiger, and was nearly adopted.

In contrast, the Churchill was never primarily intended to fight other tanks – it was intended to support infantry onto their objectives, which required a very different armament optimised to fire HE rounds to destroy bunkers.

Ironically, the arrival of the new APDS rounds just before D-Day gave the Churchill's 6-pdr a new lease of life as an anti-armour weapon, with penetration almost equal to the 17-pdr on the Sherman Firefly. Churchill units therefore retained a proportion of these when most Churchills were upgraded to the 75mm.

These points shaped the book, and meant the Development section looked at how well each vehicle was suited to its specific tactical role rather than as generic “tanks”, while the Combatants section looked at crew training, and considerations such as how easily each crew could spot a target, how fast they could traverse their gun to bear and how reliably they could hit it – vitally important in combat, but often overlooked.

Equally, I wanted the book to be specific to the conditions of the Normandy campaign, which had significant effects on both vehicles. In particular, the Tiger units all had to undergo long road marches under near total Allied air superiority to even reach the front. This was something the Tiger – intended as a limited-endurance breakthrough tank depending on rail for strategic movement – had never been designed for. The result was that units arrived piecemeal – two companies of s.SS-PzAbt 101 had only six and eight of their 14 tanks available respectively after the six-day road march of 400km – and short of fuel and spares, which would tell during the coming battle.

Similarly, the book looks at the doctrinal and practical difficulties – some of them self-inflicted – the British experienced while developing effective tank–infantry cooperation in the European Theatre where their previous experience in North Africa was not always helpful.

Finally, the book looks at Tiger and Churchill units, as well as individual tanks. This highlights that while the Tiger was not an unreliable vehicle (daily availability was as good as the Panzer IV), it required so much specialist support that each Tiger battalion included an entire workshop company.

The Germans also lacked appropriate recovery vehicles, having to use two or even three SdKfz 9 half-tracks to move one Tiger, making recovering damaged vehicles and returning them to the fight more difficult. By comparison, Churchill units benefited from better recovery vehicles and an extensive rear-area workshop organization, making it much easier to keep units up to strength during sustained fighting

Each Duel book centres around an action where the two featured vehicles come into conflict. The choice for a book set in Normandy was limited by the relatively small numbers of the two types in theatre. Only three Tiger battalions (one army, two SS) fought in Normandy, though despite the appearance of a Tiger in Saving Private Ryan, all were deployed against British units. Meanwhile, only three of the eight British Army Tank brigades – specifically tasked with infantry support work – were equipped with Churchills, with the rest making do with the same lighter Shermans as the Armoured divisions, intended for fast exploitation.

I ultimately chose Operation Jupiter, the British effort to take the strategically important Hill 112 on 10/11 July, which saw the British supported by two Churchill regiments and opposed by several German armoured units, including an SS Tiger battalion

It also gave both vehicles a chance to show their strengths: the Churchills supporting the British infantry as they took defended Norman villages then providing anti-tank support until towed guns could be brought up, while the Tigers were able to use the long range of their 88mm guns from high ground to interdict British forces trying to move across the valley, then demonstrated their original role as break-through tanks in a series of counter attacks.

Ironically, though most Normandy operations are well recorded, I found photos of Operation Jupiter surprisingly scarce. This puzzled me, until one of several accounts of the action I went through mentioned the author's unit passing the body of the attached AFPU photographer, killed by shellfire with his smashed camera beside him.

Operation Jupiter also offered a microcosm of the whole Normandy campaign. Although it was a tactical victory for the Germans (given they were able to push the British off most of the ground they had taken), it was also a strategic defeat, since doing so had effectively cost them two irreplaceable panzer divisions.

These had been intended for the strategic counter-attack to push the Allies back into the sea, but as so often happened in Normandy, the Germans had been forced to commit them to staunch a collapsing defence and lost their chance to regain the strategic initiative.

Studying the Normandy campaign benefits from the good records available from both sides, though one sometimes has to take them with a grain of salt – one Churchill commander claimed to have destroyed three Tigers during Operation Jupiter, which would have been a considerable feat, but sadly his claim is not supported by the German records.

It is also important to understand that the British and German armies recorded losses differently, and thus the two sets of loss figures are not directly comparable. The British recorded losses as soon as tanks were damaged beyond the unit's own ability to repair and passed to REME units, even when tanks were clearly repairable and would return to action later. By contrast, Germans units only classified tanks as losses if they could not be recovered, or were completely unrepairable – even gutted hulls awaiting shipment for factory rebuilding were not written off unit strength.  Tiger units thus recorded few losses early in the fighting when they were able to recover vehicles, no matter how badly damaged. They then recorded very high apparent losses during the last weeks of the campaign, as they were forced to abandon tanks already disabled earlier in the fighting but kept “on the books” as theoretically repairable as well as those which broke down or ran out of fuel during the retreat itself.

This also causes confusion about the cause of losses. Forty-three per cent of the Tigers lost in Normandy were officially listed as “Abandoned or destroyed by crew”, as opposed to destroyed by enemy action. While some of these genuinely were abandoned due to lack of spares or fuel, many had in fact already been disabled in action before finally being destroyed by their retreating units.

This information also lets us look at the claim that it cost five Allied tanks to kill a Tiger in Normandy. Looking at the raw figures, this doesn't initially seem too far off, and it fits well with British operational research which showed it took an average of 4.2 hits from Allied gunnery to knock out a Tiger.

However, this may say less about the superiority of the Tiger to Allied tanks than first appears.

Post-war analysis showed the single most important factor in tank combat was which tank spotted its opponent first, fired first and hit first. The Germans were on the defensive in Normandy, so their tanks were often stationary and in cover, giving them a massive advantage over Allied tanks advancing towards them.

The second most important factor was crew training. British tank crew were reasonably well trained in their individual roles, but received relatively little training in large-scale operations. More importantly, none of the Churchill crews landed in Normandy with any combat experience whatsoever.

By contrast, the German Tiger units all had significant combat experience on the Eastern Front, which gave them a considerable initial advantage over the green British crews.

It is therefore no surprise that when we look at other German armoured units, their kill ratios in Normandy are almost as high as those for Tiger units, suggesting that it was not the superiority of the Tiger which led to this.

Similarly, if we look at Tiger units later in the war, when Allied tank crews had gained experience even as German crew quality declined due to heavy losses, we should expect the Tiger kill ratio to drop if the German advantage was due to the tactical situation and crew quality itself rather than the Tiger itself. This is exactly what we see in the later battles in the West.

Even aside from that, the Tiger's high performance came at a cost, both in terms of the initial resource to build each vehicle and in terms of the maintenance and logistic resources to keep it in action.

A Tiger cost RM 400,000 to produce, twice the price of a Panther or four times the price of a StuG III. By contrast, each Churchill – which carried even thicker armour than the Tiger in the later marks that appeared just in time for Normandy – cost only £11,150, or roughly 112,000 Reichsmarks.

Obviously, cost-effectiveness is not the only measure of a tank's success, and the book looks at the psychological impact of “Tigerphobia”, which became significant enough for Montgomery to address it personally.

However, it does suggest Germany might have been better off with a larger number of cheaper tanks than with a small number of Tigers, whose improved results in combat did not apparently justify their large price premium.

Meanwhile, the Churchill cemented its position as one of the most successful British tanks of the war, having overcome its initial reliability problems, been one of the few British tanks whose armament could be upgraded from a 2-pdr to a 6-pdr and finally to a 75mm, and received a significant up-armouring.

'Tiger vs Churchill' can be purchased in paperback, ebook adn PDF on our website!