On the blog today, author Don Hollway introduces us to one of the key players in his new book At the Gates of Rome - Alaric, the Barbarian king who defeated the Eternal City. 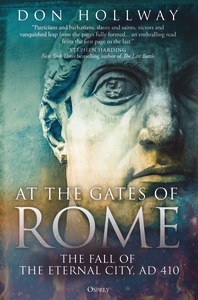 Down through history, innumerable cities have fallen to conquest, fire and sword. Only one, however, was ever called the world’s greatest city, and only one man could boast of, or lament, having sacked it. In August of AD 410 the place was Rome, the Eternal City, eternal no more thanks to the conquering Goths and their barbarian king, Alaric. Yet by all accounts, it was not Alaric’s wish to destroy Rome. He had to be driven to it, by the intransigence of the Romans, by the vengeful pride of his own people, and, according to his own words, by some higher power.

Alaric had been only a boy in 376 when the Goths, a Germanic people who had migrated from Scandinavia to Eastern Europe, were pushed to the border of the Empire by the rapacious Huns of the Asian steppes. The Goths’ greatest wish was to become Roman, to enjoy the privileges of citizenship and  imperial protection. Instead the Romans penned them in a riverside internment camp, starved them, sold their children into slavery, and, when the Goths finally rebelled and broke out, sent an army to destroy them. At Adrianople, in 378, the barbarians annihilated that army, killing Emperor Flavius Valens in the bargain. His successor, Theodosius I, was forced to accommodate the Goths and accept their warriors into his army as mercenaries. Yet they were still barbarians, not citizens. Unlike previous Celtic and Germanic tribes in Gaul and Britannia, they came into the empire unconquered, unassimilated, an independent kingdom within the bounds of empire.

That was the world in which Alaric grew up. As a young bandit chieftain he fought the Romans, then served them as a tribune of legionaries. At the great Battle of the Frigidus in 394, when the Christian East defeated the pagan West, 20,000 Goth mercenaries fought for Theodosius, and 10,000 died for his victory. Afterward, the Roman general Stilicho, with a surplus of Western troops, had no need of Goths. He dismissed Alaric and his warriors from the service. Their sacrifice gained them nothing. They were forced to wander the hinterlands, in search of a home and in need of a king. Alaric, the leader willing to deal with Romans, and if necessary to fight them, was the natural choice.

In those days the empires, East and West, were practically engaged in a cold war. Each used the Goths as tools to antagonize the other, making them the tipping factor in the balance of power. The East encouraged them to settle in Greece; Stilicho arrived to drive them out. The Goths invaded Italy; Stilicho defeated them in the field. The East named Alaric as magister militum, military governor, of Illyricum, the province between the empires; Stilicho enlisted him again – this time, in a bid to unite the empires by force. For that, in 408, the general’s political enemies had him executed.

That left Alaric as the most effective military leader in the West. His offer to command Rome’s legions against rebellions cropping up in Britannia, Gaul and Hispania was spurned by Theodosius’ son Emperor Honorius and his advisors. A massacre of Goth women and children in Roman cities led their men to desert from Rome’s legions and join Alaric, but to feed this immense horde forced the king to once again petition Rome for land and money. Again, he was refused. To force concessions from Honorius, Alaric threatened Rome. The emperor did not care. Both men used the city and its people as bargaining chips, hoping the other would submit in order to spare it. A Christian monk on the road to the Eternal City begged the king to turn from the path of vengeance. Alaric reportedly replied, “I am not set on this path of my own will. There is something irresistible that compels me every day, telling me, ‘Go to Rome, and desolate that city.’”

In the years leading up to 410 the Goths blockaded Rome three times, taking over its vital seaports and cutting off river traffic on the Tiber. The citizens surrendered their slaves, their gold and their belongings to Alaric, all for naught. He even named his own puppet emperor in Honorius’ stead. It availed him nothing. By August of AD 410 the Romans were starving to the point of cannibalism. Outside the walls, Alaric’s army was little better fed. Then somebody – infiltrators, traitors, or simply citizens hoping for mercy – simply opened the gates to the barbarians.

The Goths spent three days looting, burning, raping and murdering. Many of the great, almost mythically old buildings of Rome were destroyed, and some of the ruins still show damage wrought in those three horrific days. The fall of Rome in AD 410 was a signal event in history. To this day it is taken as the end point of Classical Antiquity and the beginning of what would be known for generations as the Dark Ages. Arguably, Western civilization would not recover for a thousand years.

When the Goths were through with it, Rome had nothing left to offer them. They went south, as ever in search of a home. They gathered ships to take them to Sicily or even Africa, but a storm wrecked the fleet and they were forced to turn inland for the winter. Somewhere along the trail Alaric came down with what is thought to be malaria. He died at Consentia. The Goths diverted a river, buried him in its bed along with his spoils of victory, and let the waters cover his grave. It has never been found.

Alaric was a crafty politician and wily military commander, a barbarian who was Roman in all but name. His people would go on to found one of the greater kingdoms of the early Middle Ages and even help the Romans defeat the Huns. Yet they, and Alaric, would ever be famous – infamous – as the barbarians, and the barbarian king, who sacked Rome.

Find out more about the book on our website here