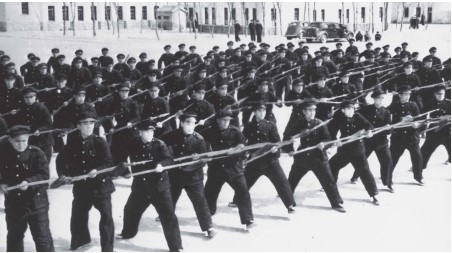 Hu Zongnan's troops in training. Despite betraying the Nationalists over Yanan, Hu continued to profess loyalty to Chiang and to lead a Nationalist army. (Philip Jowett).

On the blog today, author Michael Lynch considers the enduring significance of the Civil War.

There are episodes in history that have a direct and immediate bearing on today’s international crises. The Chinese Civil War of 1945–49 is one of those. In writing a study of those tumultuous years, I became increasingly conscious that I was examining a series of events and issues that, though they belonged to the past, were of the utmost significance for the present. The People’s Republic of China (PRC) is one of the world’s great powers, arguably the greatest. What its leaders think and how they behave affects the rest of the world in the profoundest of ways.

The current Chinese leaders’ perception of the world and the PRC’s role in it is a consequence of a number of developments, the central one being the Civil War, a struggle in which the Communist Party (CCP) under Mao Zedong defeated its internal enemies, Chiang Kai-shek’s Nationalists (GMD), and rejected the attempts of both the Soviet Union and the USA to impose themselves on the struggle. The outcome of Mao’s victory was the establishment of China as an independent state. That is why the Civil War is to be regarded as the major formative event in modern Chinese history. Without the Communists’ victory in the war, all that followed under Mao and his successors down to and including Xi Jinping would not have occurred. In short, without the Civil War there would be no Xi Jinping and no Chinese world dominance.

The Civil War is thus of momentous consequence for our times. There is one particular legacy of the war that continues to cast a perilous shadow – Taiwan, an issue that singly is the greatest threat to world peace in today’s world. When Chiang Kai-shek was driven from the mainland after his defeat at the hands of Mao’s Communists in 1949, it was not the end of the story. Having fled with the remnant of his forces to the offshore island of Taiwan (Formosa), Chiang proceed to create an alternative Chinese Republic which claimed to be the representative of the true China. Mao’s counter claim was that Nationalist Taiwan was merely a rebellious province, which the PRC was entitled to invade and re-occupy at any time it chose. Backed by the USA, which committed itself to the defence of the island as part of America’s Cold War strategy, Chiang’s Nationalists were able to resist. That resistance has continued from 1949 to the present. The critical question that remains unresolved is whether the PRC is prepared to carry out its continually repeated threat to take Taiwan by force, and whether in that event, the USA would intervene militarily in keeping with its longstanding promise to come to the aid of the Taiwanese.

To put all this in historical perspective and estimate the War’s enduring significance, I offer the following observations:

There is also a sense in which the Chinese Civil War has not ended; no formal peace treaty or agreement has ever been made. The conflict that began in the era of the Cold War has outlived that larger struggle. The two Chinese states that emerged from the Civil War, the PRC and Taiwan, have followed very different paths in their subsequent development, but each side continues to claim that it alone is the legitimate government of the whole of China. In the third decade of the 21st century, the issues over which the Civil War was fought 70 years earlier have still to be resolved. Xi Jinping, PRC leader since 2012, has repeatedly restated the right of the PRC to reclaim Taiwan for the mainland, by military invasion if necessary. Therein lies a direct link between the war of 1945–49 and the current threat to the international order and world peace.