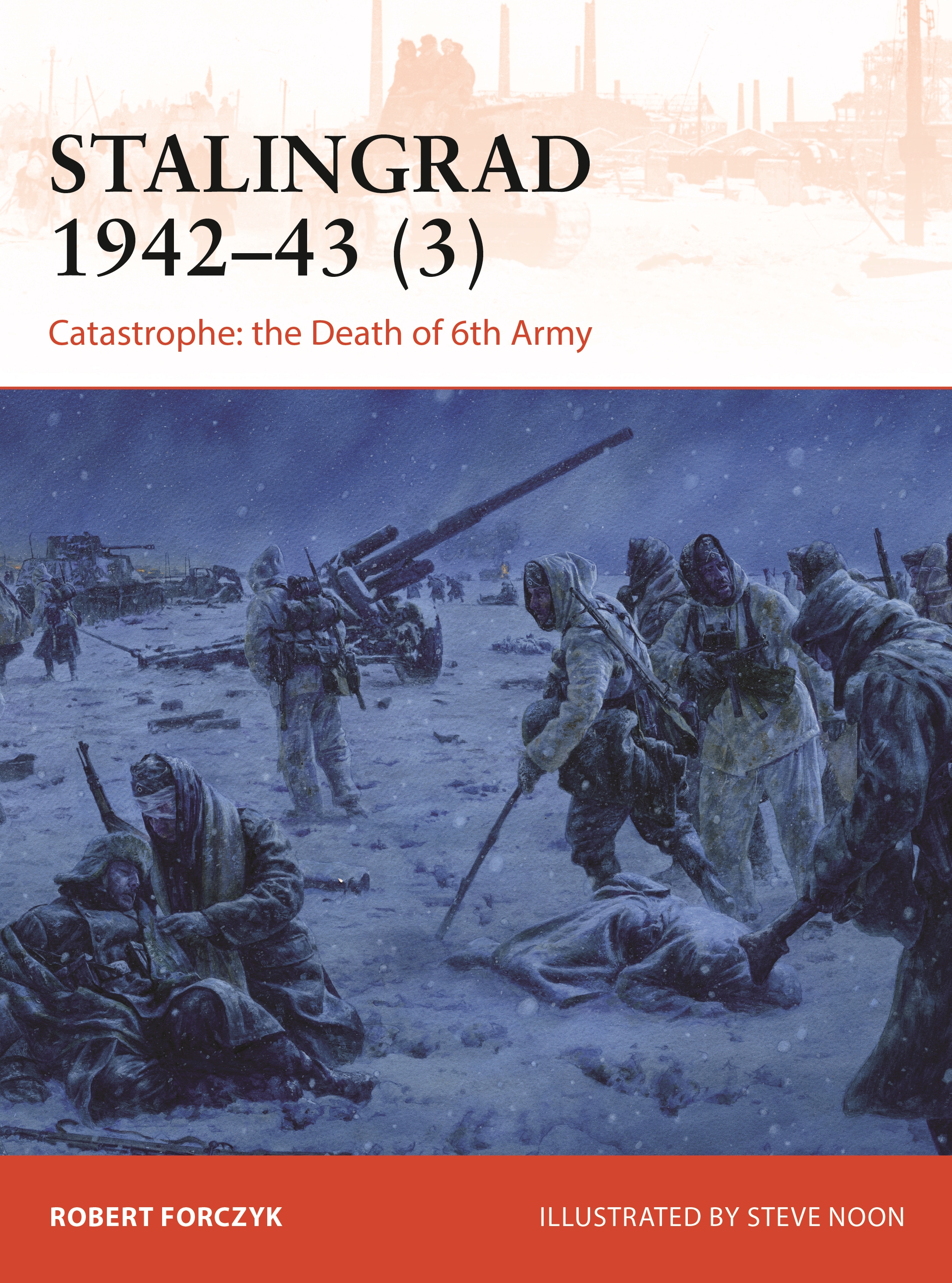 The final fighting around Stalingrad between November 1942 and February 1943 is remarkable for two things. First, although the Soviet Red Army had managed to avoid defeat in the first year of the Russo-German War, it had not yet won any decisive victories. While the Soviet winter counter-offensive that began in December 1941 was a great success, it only temporarily deprived the Wehrmacht of the strategic initiative. However, Operation Uranus and the encirclement of the German 6th Army at Stalingrad was an epic strategic victory that permanently changed the operational dynamics on the Eastern Front. Heretofore, the German Wehrmacht had waged its campaigns in the East on the thinnest of resource margins, with no appreciable strategic reserves and skimpy logistics, but still managed to advance eastward. After the margin call at Stalingrad, there would be no further advances eastward. The second reason why the final phase of the Battle of Stalingrad was so significant is that not only an entire German army was eliminated, but four other Axis armies were eliminated, as well. The Third Reich had relied heavily upon the Hungarian, Italian and Romanian armies to hold large stretches of front line, but after their forces were defeated in the winter of 1942/43, and their contributions on the Eastern Front dropped to a low level. After the Stalingrad campaign, the Wehrmacht had to hold virtually the entire front-line expanse with its own limited number of divisions. By any definition, the defeat at Stalingrad was a catastrophic event, which left the Wehrmacht in an impoverished state and which compelled its leaders to begin trading space for time, in the vain hope of holding off inevitable defeat.

In terms of battlefield command, the denouement of the Stalingrad campaign was heavily influenced by capricious decision making on both sides. The proximate cause of the German disaster at Stalingrad lay in Hitler’s obstinate refusal to accept that Stalingrad’s armaments factories had been neutralized, and to pull the 6th Army back to safer positions for the winter. However, both von Weichs and Paulus, the local commanders, share considerable blame for failing to develop adequate contingency plans and keep some of their available armour as a local reserve. The Wehrmacht had just enough resources in situ to delay, if not stop, a Soviet attempt to encircle 6th Army at Stalingrad, but the local commanders failed to take timely and appropriate precautions. On the Soviet side, Zhukov has traditionally been afforded the most credit by fawning Western historians for the planning of the Red Army’s winter counter-offensive (Operation Uranus), even though he did not develop the concept and initially opposed it. Zhukov had been responsible for several earlier failed counter-offensives to relieve enemy pressure on Stalingrad – all poorly planned frontal assaults – and he was content to order more of the same. Instead, it was Andrei Eremenko, the Stalingrad Front commander, who developed the winning plan. Eremenko was looking for ‘something new’ to catch the enemy by surprise, after learning by experience how tough German defensive positions were to overcome. Instead, Eremenko recommended going after the poorly equipped Romanians with a wider pincer offensive. Stalin saw the logic in this concept and approved Eremenko’s plan, which Zhukov grudgingly accepted. Stalin also stacked the deck in the Red Army’s favour by assigning some of its best commanders – including Vatutin and Rokossovsky – to the operation. Thus, the stage was set for Soviet success, with the Soviet A-team given relative freedom of planning, while the German B-team at Stalingrad laboured under very restrictive guidance.

Nevertheless, Zhukov managed to take more than half the available forces in the Stavka strategic reserve for use in his own offensive at Rzhev (Operation Mars), which left Operation Uranus somewhat under-resourced. Eremenko wanted to attack on a broader front and in two echelons in order to instigate a widespread collapse of the enemy’s front. Instead, the follow-on operation (Saturn) to exploit the expected success of Operation Uranus had to be scaled back and delayed several weeks, which gave the Axis just enough time to scrape together a blocking force on the Chir River. While most accounts tend to criticize the Romanian armies for collapsing quickly in the face of the Soviet counter-offensive, Group Lascar put up a protracted if hopeless defense which ruined the Red Army’s timetable. Likewise, the much-maligned German XXXXVIII.Panzer-Korps – which was little more than a battlegroup – was unable to halt the Soviet advance to Kalach, but played a significant role in creating a new line on the Chir River. Nevertheless, Hitler made the Panzer-Korps commander, Heim, a scapegoat and had him placed under arrest.

Once the 6th Army was encircled at Stalingrad, the Soviet leadership assumed that it would be a fairly easy task to finish off this trapped formation. However, the Soviets seriously under-estimated how many Axis troops were inside the Stalingrad pocket and the desperate fanaticism of troops who realized that they were involved in a no-quarter situation. Instead, it would take ten weeks of costly fighting to reduce the 6th Army. The final Soviet attacks to eliminate the pocket, Operation Ring, met such intense resistance that the offensive had to be conducted in a start-stop manner to keep replenishing the depleted Soviet front-line units. Although reduced to near starvation by January 1943, the 6th Army continued to fight for every pile of rubble in the burnt-out wreckage of Stalingrad. Although Paulus and his staff opted out of the final fighting, content to wait for the end in their underground bunkers, German junior officers were able to keep enough of their troops operational to maintain a tenuous perimeter in spite of sub-zero temperatures, minimal food and lack of hope. Both the Luftwaffe airlift and Hoth’s relief effort (Operation Winter Storm) were futile gestures that quickly faded.

While working on this book, I was asked what the most surprising thing was I discovered in researching the final phase of the Battle of Stalingrad. Typically, the 6th Army at the end of its rope is regarded as a bunch of frozen, starved scarecrows, clad in rags and down to their last bullet – an image that was certainly true for some. Yet some German soldiers continued to fly into the pocket to rejoin their units until the last few weeks, and these men were in much better condition (not surprisingly, many of those who survived Soviet captivity were soldiers who had not spent ten weeks in the pocket). This level of dedication to one’s comrades, known as Kameradschaft in German, is extremely rare in military history. It is also surprising that German survivor accounts mention that some individuals (none are named) managed to stay well armed, well fed and clothed in winter uniforms right up to the end – an example of what is colloquially known today as ‘Combat Darwinism’. Most of the German troops at the end were not combat soldiers, but rather were drafted from support units to replace losses – these men often had limited combat value and tended to die like flies when forced to sleep outside in the Russian winter. Unsurprisingly, the few surviving infantry-trained junior officers and NCOs ensured that they took the pick of the remaining weapons, ammunition and rations to hold the perimeter. When the pocket finally collapsed, these hardy individuals tried to escape in small groups across the steppe or down the Volga – they had some interesting adventures, but none escaped. After the main body of 6th Army surrendered, the Soviet NKVD spent two weeks hunting down evaders and German soldiers hiding underground – eliminating at least another 5,000 troops. The exact number of Axis troops captured at Stalingrad will never be known with certainty – the Soviet numbers are ‘squishy’ and don’t add up well – but it is certain that nearly half the prisoners died within six weeks of entering Soviet captivity, and only 5,000 would ever return to Germany.

The Battle of Stalingrad was one of the most brutal blood-lettings of World War II and it was the decisive campaign that sealed the fate of the Third Reich. The Red Army, particularly the common soldiers who died by the tens of thousands, deserves great credit for stopping the Wehrmacht and inflicting such a signal defeat upon one of the most ruthless war machines in military history. Nevertheless, the profligate waste of human lives at Stalingrad barely registered on the minds of the rival warlords, Hitler and Stalin. Hitler did not mourn the loss of the 6th Army, nor did Stalin fret about the loss of nearly one million of his ‘little cogs’, but only focused upon the import for their future strategic plans – both of which revolved around the domination of other countries. In military terms, the Battle of Stalingrad provides an enduring lesson about the risks of basing a major campaign on assumptions and wishful thinking, rather than on sober facts. In the first two years of World War II, Hitler and the Wehrmacht staff had taken great risks in Norway, the Ardennes Forest and western Russia, but had won impressive victories in spite of unfavourable odds. At Stalingrad, in November 1942, the 6th Army enjoyed no such luck, and its soldiers paid the price of miscalculation in full.

If you enjoyed today's blog post is available to purchase here.