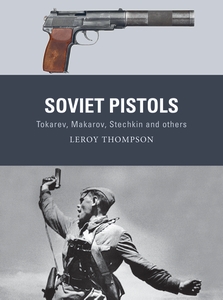 In today's blog post Leroy Thompson gives us an overview of the development of Russian handguns.

In the Soviet Union, the expansion of the Red Army led to the growth of the domestic design and production of all manner of weapons including handguns. Though the Nagant revolver, which had begun production in the Tsarist era, would continue in production through World War II and remained in use much longer, the first Soviet semi-automatic pistol design was produced beginning in 1926. This small pistol, chambered for the .25 ACP cartridge, was designated the Korovin. Estimates of production of the Korovin run as high as hundreds of thousands, though it is a rare pistol outside of the Soviet Union. Small and easily carried in the pocket, the Korovin was reportedly popular with members of the NKVD, police investigators and high-ranking military officers.

The first true military service pistol produced in the Soviet Union was the Tokarev TT-30, introduced in 1930. Eventually, around 1,330,000 TT-30 and TT-33 pistols would be produced. The pistol would see use with Soviet forces during World War II and would continue in second-line service into the 21st century. Its 7.62×25mm cartridge was the same used in the PPD-34/38/40, PPSh-41 and PPS-42/43 SMGs, thus making to Tokarev logistically compatible. Additionally, the 7.62×25mm round offered the penetration to punch through heavy winter clothing worn by the Germans or other enemies on the Eastern Front. The TT-33 proved popular among Communist guerrillas in various parts of the world and among Soviet satellite countries, some of which produced copies of the pistol domestically.

With the end of the Cold War, surplus Tokarev pistols have proven very popular among American shooters, though the lack of a thumb safety precludes import of the pistols unless a manual safety has been added. The TT-33 is still found in trouble spots around the world, and it remains one of the weapons normally included in foreign weapons training for special-forces soldiers. The Tokarev has become quite collectible, especially examples brought back by veterans of World War II, Korea, Vietnam, Afghanistan and Iraq, as the TT-33 was used in all those conflicts and virtually any other counterinsurgency war after World War II. The Soviet Union and China were quite willing to supply Tokarev pistols to their client states, and US veterans were happy to bring them back.

Even during World War II, development of a replacement for the Tokarev was under way. The PM (Pistolet Makarova), most commonly known as the Makarov, was a paradigm of Soviet weapons design. It was simple, durable, reliable and inexpensive to produce. As with other weapons such as the AK47 designed for Soviet conscript soldiers or the troops of Soviet client states, the Makarov required minimal maintenance and was simple to operate. Chambering the Makarov for the intermediate 9x18mm cartridge, which was less powerful than the 9×19mm Parabellum cartridge but more powerful than the 9×17mm (.380) cartridge, meant the PM could employ a blowback design, allowing a more compact pistol that required fewer parts. Entering service in 1951, the Makarov would remain the most widely used Soviet military and police sidearm for more than 50 years and still remains on issue with some units today.

The PM did not fulfill all of the requirements for a military sidearm among Soviet personnel, however. A ‘machine pistol’ was deemed desirable for specialist troops and some officers. As a result, at the same time as the PM, the APS (AKA Stechkin) machine pistol entered service. Also chambered for the 9×18mm cartridge, the APS had a 20-round capacity and could be fired in semi-automatic or full-automatic modes. To allow more control of the APS, which had a cyclic rate of 750 rounds per minute on full-auto setting, it came with a holster stock, which could be quickly slipped into place on the APS’s grip. Later, for use by Spetsnaz units, the APB, a suppressed version of the APS was developed.

The Soviets developed an array of special-purpose pistol for use by Spetsnaz or KGB operators. One of these pistols, the PSM, was an enigma for Western intelligence agencies. The PSM was a compact, extremely slim pistol based on the Walther PPK system and chambered for a 5.45×18mm cartridge. This cartridge had the ability to penetrate many layers of Kevlar, leading to speculation that it was designed as an assassination pistol. However, it seems to have been intended as a defensive weapon for high-ranking military officers, KGB/GRU agents and Communist Party officials. For assassinations, the PSS silenced pistol was developed. The 7.62×41mm noiseless and flashless cartridge for the PSS used a sealed cartridge system employing a piston. Also covered in my book are the specialized underwater pistols used by the Russian combat swimmers. These include the APS Underwater Assault Pistol and the SPP-1 Underwater Pistol.

Though the book focuses primarily on the handguns available to Soviet armed forces and police prior to the end of the Cold War, there is also a summary of the latest development in Russian combat pistols, including the P-96, OTs-27, GSh-18 and MP-443.

During the Cold War, Soviet small arms were of special interest to NATO troops as they were the arms they were most likely to face in combat. As has been the case through the conflicts of the 20th and 21st centuries, US and other Free World troops have taken any chance to try enemy arms. US soldiers, traditionally magpies where captured weapons have been available, have brought home Soviet handguns from World War II (usually captured from Germans or traded for a wristwatch with Soviet troops) through to the ‘War on Terror’. The large number of East German and Bulgarian Makarov pistols imported into the United States after the end of the Cold War has made them a popular choice for citizens wanting a reliable and inexpensive pistol for self-defence.