On the blog today author Balázs Mihályi takes us through the background of the siege and why Budapest was a target. 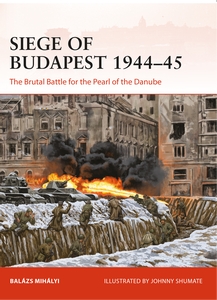 The Transdanubia region was of strategic importance to the Germans, with Hitler insisting on its defence primarily for economic reasons. Transdanubia had resources that were deemed vital for German military industry. Following the loss of the Romanian oilfields, Zala had the largest sources of oil, and after the loss of France, Hungarian sources accounted for 90 per cent of the Axis powers’ production of bauxite, a component of the aluminium used in the construction of aircraft. Both these materials were sourced from the Transdanubia region. In contrast, the industrial capacity of Hungary, and of Budapest itself (producing, for instance, aircraft engines for Germany) were negligible compared to German industrial production capacities. For the Germans, losing Budapest would have meant that the Transdanubia region would also be under threat, and the road to Vienna would be opened. It is no coincidence that Edmund Veesenmayer, Germany’s ambassador to Hungary and omnipotent special envoy after the country’s occupation by Germany, proclaimed that it did not matter if Budapest was ‘destroyed ten times, so long as Vienna could thereby be defended’.

The Soviets saw Budapest as the capital of a would-be allied country – assuming a successful switch in power took place. The city was thus important for them, but following an unsuccessful attempt, Hungary did not switch sides. This, however, did not diminish Budapest’s importance for the Soviets. Budapest’s bridges over the river Danube, and its industrial facilities, were also of value for the Soviets. Yet, the Soviets overestimated Budapest’s industrial significance to German military industry, and they also failed to recognize the strategic importance of Transdanubia’s material resources.

In October 1944, Miklós Horthy announced that Hungary had declared an armistice with the Allies and withdrawn from the Axis. He was forced to resign, placed under arrest by the Germans and taken to Bavaria. After Horthy’s unsuccessful attempt, the hope of Hungary switching sides was lost. On 22 December 1944, the Provisional National Government was formed in Debrecen under Soviet rule; it was originally intended to be formed in Budapest, but events did not allow for it at the time. The taking of Budapest without fighting and bloodshed was not to happen, and thus the Soviets had no choice but to try to occupy the Hungarian capital. Taking Budapest, however, proved to be a much more difficult undertaking than they would ever have thought.

On 13 February 1945, the Soviets occupied Buda and the siege of the capital ended, though some German groups surrounded during the breakout still fought for days at places in Buda. Evaluating the siege of Budapest is quite a complex question. Contemporary press articles called the siege of the Hungarian capital a ‘Second Stalingrad’. Such a comparison, however, is in many ways false. Hungary was only a secondary theatre of war, and the events taking place here did not have a major influence on the course of the war, whereas Stalingrad was a defining event on the main theatre, and considered a turning point in World War II.

It would also be wrong to draw any parallels in regards to casualties. The Battle of Stalingrad had casualties of more than a million troops, whereas the siege of Budapest had fewer than 100,000 casualties taking all sides into account.

The question arises as to why the contemporary press tagged the siege as a Second Stalingrad. The reason is that at some places and for short periods, the intensity of fighting indeed was comparable to that of the Battle of Stalingrad. Another reason is that this battle also took place in a large city. However, it needs be emphasized that such intensive fighting was limited to very short periods and to small locations in the city, whereas in the rest of the city, there was often complete calm for even weeks at a time.

In evaluating the siege of Budapest, we must look at things in a broader context. All through the campaign, the Soviet command focused on capturing the city of Budapest, which really did not cause a serious blow to the Germans, neither in economic or political terms. Compared to Germany’s military industry, Budapest’s industrial capacities were negligible. In terms of politics and the pro-German Szálasi government, the loss of Budapest did not cause problems, nor was it in any way a turning point as regards military resistance. In contrast, the Soviets did not recognize the economic significance of the Transdanubia region for the Germans, and the Germans continued to control parts of the region and its raw material resources up until March 1945.

The plans drawn up by the Soviets to capture Budapest were too ambitious, and they were to bring results, at least in part, only if the attack was properly concealed and thus surprised the German and Hungarian forces. In the locations, outside Budapest, where the Germans were already anticipating an attack and still had sufficient reserves available, the Soviet attempts failed.

The Soviets’ attempt to encircle the Hungarian capital eventually led to success, but instead of a quick and easy victory, a longer urban fight ensued, which the Soviets did not have enough manpower for. Also, the Soviet air force and air defences failed to cut off the air bridge that was of key import for the Germans in holding the Budapest pocket, and the Germans were thus able to deliver supplies to the city by air even in the final days of the siege.

Though the Germans continually lost territories to the attacking Soviet forces, they managed to hold Budapest throughout 1944, even though it was a primary target for the Soviets. At the same time, they could not prevent the city from being surrounded. In the Konrad operations, the Germans had their greatest successes when they attacked in places and at times the Soviets were not expecting. Surprise and speed were key to these successes. At the same time, the Germans also suffered from a lack of manpower, in the course of both the Konrad operations and the defence of Budapest. In the Konrad operations, there was not enough infantry available, which in many cases would have been necessary for the further development of successes, such as neutralizing the surrounded Soviet divisions or eliminating the Soviet anti-tank zones. They were lacking the air forces and infantry for these in many cases. They were also lacking in veteran infantry for the defence of Budapest; the capital was defended by SS cavalry, tankmen, and Volksgrenadiers on the German side, and only the Hungarians had infantry divisions and volunteer battalions.

Together, the siege of Budapest and the German relief attempts kept the forces of the 2nd and 3rd Ukrainian fronts engaged for months. It took more than 50 days of urban combat to capture the capital, and the Soviets failed to thwart the German breakout too; some of the troops that broke out even managed to reach friendly positions. Considering the targets set by the Soviets back in the autumn of 1944, this hardly represents an overwhelming success: they managed to capture a metropolis in a protracted campaign with great difficulty. This victory, however, brought no change to the course of the war. The parts of the Transdanubia region that were still under German control remained so for nearly another two months. By comparison, in the time it took to capture Budapest, the Red Army advanced from Warsaw to near Berlin on the main battlefield. It should be added, however, that the balance of power was quite different on the main battlefield. As for the German side, they did not achieve great successes either: in the end, all forces in the Budapest pocket were lost, and though more than 2,000 troops got out (some, injured, evacuated via the air bridge, and some in the breakout), this was little consolation compared to the lost divisions.