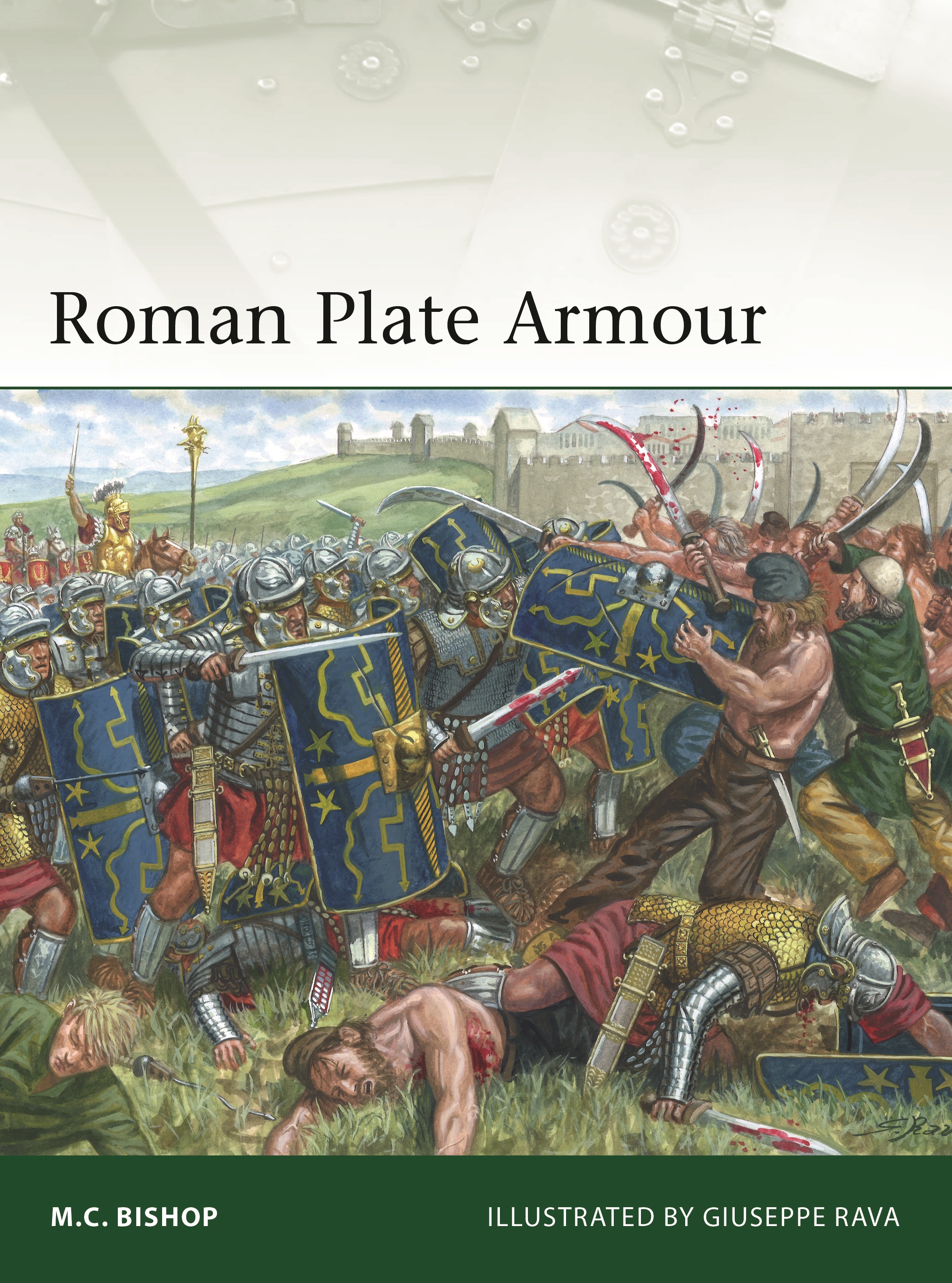 M.C. Bishop introduces us to different types of Roman plate armour and its construction.

In the centre of the Forum of Trajan in Rome, Trajan’s Column still confidently presents a hierarchy of early 2nd century AD Roman armour to the observer. The emperor and his accompanying officers are shown wearing muscled cuirasses, citizen soldiers (legionaries and members of the Praetorian Guard) wear segmental cuirasses, and auxiliaries wear mostly mail (with a few examples of scale) armour; none of them wear limb defences. The message is clear, particularly the ubiquity of segmental plate armour. However, to underline just how misleading this impression might be, a contemporary monument at Adamclisi (Romania), supposedly depicting the same campaigns, shows a very different Roman army, with plenty of mail and scale armour, but the only segmental defences are to be found on the sword arms of the legionaries. Reconciling these disparate strands of representational evidence and actual artefacts recovered from the archaeological record is one of the challenges faced by the student of Roman armour.

Plate armour was known long before the Romans, with the Bronze Age Dendra (Greece) cuirass perhaps being the best-known early example. It is in fact still in use among modern armies, first with flak jackets and more recently with ballistic armour (which can make up as much as 20kg of a modern soldier’s kit). In its simplest form, Roman plate armour could be a simple disc (pectorale) on a harness, protecting the warrior’s vitals. However, Hellenistic, Etruscan and Italian influence meant that there was always a proportion of shaped ‘muscled’ cuirasses, mimicking (and, one suspects, enhancing) the form of the human thorax and these came to distinguish the officer class by the time of the Principate. Those soldiers who did wear armour in the Republican army favoured mail, from the Punic Wars onwards, but something remarkable happened during the last decades of the 1st century BC.

The complexity of the shaping involved in producing a muscled cuirass meant it was extremely labour intensive. Mail, by comparison, was formed from very simple elements, but also consumed excessive man hours in its production and was heavy to wear (between 7kg/m² and 27kg/m² depending on ring dimensions, density, and the material used). The novel solution adopted by some (but by no means all) of the Roman legions of Augustus was articulated plate armour. This, commonly known by its Renaissance coinage of ‘lorica segmentata’ (literally, segmental body armour), was made out of strips of sheet steel curved in only one plane. Moreover, this curvature can actually be performed by semi-skilled workers bending each strip across a knee with only the minimum amount of instruction. The cuirass is built up by riveting the plates to leather straps, and finished off by attaching a variety of brass fittings to fasten the various components together when in use.

Once assembled, another of its major advantages over mail is soon apparent: it is lighter (modern reconstructions range between 5kg and 9kg). This, in turn, means that less steel is used than would be the case with a mail cuirass. Segmental armour is every bit as flexible as mail but less fatiguing to wear for long periods, hence citizen soldiers (legionaries and praetorians) on Trajan’s Column are shown performing various tasks such as construction or woodland clearance above and beyond combat while wearing it. There were, of course, disadvantages too, principally the fragility of the cuirass. The many rivet attachment points, for both external brass fittings and the internal leather straps, were points of weakness, while iron with brass directly attached could produce bimetallic electrolytic corrosion when wet if not kept scrupulously clean.

Three basic forms of lorica segmentata are known. Finds from sites in continental Europe show that the Kalkriese type was already in use under Augustus, definitely by AD 9, and possibly as early as 19 BC. A new, more simplified version – the Corbridge type – came into use by the middle of the 1st century AD, at least some examples of which appear to have been ‘upgraded’ from the earlier form. The beginning of the 2nd century AD saw a third (and final) variant introduced, known as the Newstead type and this and the Corbridge type continued in use well into the 3rd century AD in some places.

This much is understood, but one thing remains something of a mystery: where did lorica segmentata come from? The earliest identifiable pieces, from the Roman fortress of Dangstetten in southern Germany (occupied c.15–9 BC), imply that this type of armour had been in existence for a while at the time of deposition. No sites associated with Julius Caesar’s campaigns in Gaul have produced evidence of segmental armour so – even though it must be noted that absence of evidence is never evidence of absence – this type of body armour seems to have been introduced at some point between c.50 and 15 BC. However, the technology of ferrous strips articulated on leather straps dates back at least to the Hellenistic period, with a segmental armguard known from Ai-Khanoum (Afghanistan) which must date to the destruction of the city in c.145 BC or earlier. What we lack at the moment is a ‘missing link’ to connect this Hellenistic form with the Roman.

Of all of the types of Roman armour, lorica segmentata is far and away the most prominent in the archaeological record. Why was this? The honest answer lies in the fragility of the cuirass. This might seem like a rather strange quality, but it was a by-product of the many components that went into constructing one set. Whatever the drawbacks, the type remained popular for more than three centuries, so there must have been something about it that Roman soldiers appreciated! An intriguing aspect of the armour was the high quality of the materials used – both steel and brass sheet apparently being rolled (extremely thinly in the latter case) – and the thoroughly mediocre way in which it was put together, leading to the suspicion that the troops themselves were used as semi-skilled labour for assembly.

Plate armour, whether for the body or limbs, was inevitably designed to deflect blows, but lorica segmentata worked in tandem with helmet design, which always sought to turn a blow outwards and downwards (hence all the flanges and protrusions on helmets). Segmental body armour offered its greatest protection on the shoulders, possibly a response to Iron Age warriors wielding long swords, favouring downward blows rather then stabbing. Here, plates overlapped to form a double thickness to receive direct blows or deflected ones from the helmet. Additional plates on the shoulders, as well as the girth hoops enclosing the torso, all similarly directed blows downwards.

The same technology that was used to make segmental body armour was also employed for limb defences, most notably and noticeably for armguards. The Roman army primarily used these to protect the sword arms of infantrymen and they almost certainly borrowed the design from gladiatorial equipment. The plates overlapped upwards from the wrist towards the shoulder and this meant that when the elbow was flexed, the plates (or lames, to use the technical term) bunched together, and any blow to the forearm was directed towards this reinforced area.

In north-western Europe, the technology of overlapping plates carried on internal straps seems to have been forgotten after the Roman period, only to be re-invented by medieval armourers, doubtless because it was such an excellent way to make a flexible defence for a soldier.

You can find out more about Roman Plate Armour here.