On the blog today, author Andrew Wiest answers a few questions about his new Essential Histories book, including the relevance of Vietnam today and what inspired him to start writing about it. 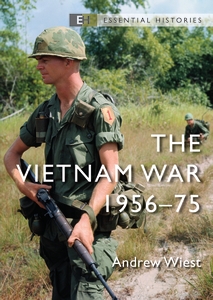 The original edition published in 2002. What has changed in Vietnam War scholarship since then?

Vietnam War scholarship has changed dramatically since 2002. Many more documents are now open regarding the war, which has enabled historians to update everything from the discussion of events surrounding the Gulf of Tonkin Resolution to the actions of individual units in battles both big and small. In addition to the opening of documents that serve to correct the timeline and basic history of events in the war, new perspectives and methodologies have also widened our understanding of the conflict. Increasingly new works on the war include more research and writing from the perspective of the Vietnamese (on both sides) and the other major players in the conflict (from China to Australia). This internationalization of the history of the war has added greatly to our depth of understanding and has provided a new perspective that is useful in studies of wars like those in Afghanistan and Iraq. Finally, the history of the Vietnam War has also moved toward inclusion of issues of gender and race, allowing for a more meaningful understanding of the role of women and African Americans in the conflict especially. So, to put it bluntly, the history of the Vietnam War has undergone major structural changes since 2002 that make our understanding of that tortured conflict much more complete. But there still remains a great deal of work to be done.

Can you tell us a bit about the relevance of the Vietnam War today and some of the military lessons learned from it?

In a world where intervention by major powers in complex civil wars abroad that result in steps toward nation building, the experience of the Vietnam War is key. Determined NEVER to face a war like Vietnam again, US-led coalitions stepped into complex military situations in both Afghanistan and then Iraq. The plan was to win crushing military victories against outmanned foes and then to return home relatively unscathed – an Anti-Vietnam if you will. In both instances, though, coalition forces found themselves mired in the very counterinsurgent and nation-building campaigns that they had hoped to avoid. Understanding the complex alliances of the Vietnam War and the stages of that conflict can serve as a vital case study regarding what works in such a conflict and what fails. Sadly, that history was ignored as the US sought to move forward into a new era of warfare. Once it became clear that both Afghanistan and Iraq would closely resemble the Vietnam War both tactically and strategically, it was too late. Coming to terms with all three of these wars will be critical to future efforts to prosecute such conflicts more efficiently.

What inspired you to first start researching/writing about the Vietnam War period?

I began as a historian of World War I, in part because really nobody taught about the Vietnam War back then. But I was always fascinated by Vietnam – the war of my generation. As I got more established as a historian I volunteered to teach a class on the Vietnam War. Heck – no better way to learn it than be forced to teach it. In that class I decided to include veteran speakers. In teaching World War I there weren’t any survivors left to talk to my students, but Vietnam veterans were everywhere. In hearing the stories of these veterans, it became achingly clear to me that the real story of the war had never truly been told. Their stories had never been told. People were arguing over causation of the war, blame in the war, and other big issues – but the soldier was somehow missing. So I decided to move my research and writing in that direction to help fill the gap and to do honor to these men and women who had fought in America’s most difficult conflict.

What do you need in your writing space to help you stay focussed?

A vast assortment of papers piled about in a fashion that looks (and perhaps is) totally disorganized. Most importantly, though, I keep the dogtags and picture of Bill Geier above my desk. Bill served with gallantry in a unit that I was privileged to write about – Charlie Company, 4th of the 47th. The book is The Boys of ’67: Charlie Company’s War in Vietnam. Bill was killed in action on June 19, 1967 while trying to save the life of one of his friends. At a reunion of Charlie Company at the time when I was writing the book, Bill’s family gave me a big hug and gave me the replica dogtags and a picture. They were so happy and honored that someone was going to try to tell his story. His dogtags still hang there to remind me that there are more stories yet to be told.

Have you ever travelled as research for your books?

I have travelled a good bit in my research. In my writing on World War I, I often travelled to London to research at the British National Archives and at the Imperial War Museum. Since moving my research over to the Vietnam War, I have spent a great deal of time in the US National Archives in College Park. Also, I have had the great good fortune of travelling to Vietnam with US veterans I was writing about and to meet Vietnamese veterans who told me their stories. The latter became a book called Vietnam’s Forgotten Army: Heroism and Betrayal in the ARVN.

What other periods of history are you interested in?

I am a full-blown history nerd. I am interested in all of it. I love to read about ancient Greece and Rome, the US Civil War, and the recent wars in both Afghanistan and Iraq. But I don’t stop there. I will read anything in history that looks interesting, which is one of the reason my shelves are FULL of Osprey books.

If today's chat with Andrew has inspired you to learn more about the war, you can order your copy from our website here!