On the blog today, author Will Hiestand takes a look at the beginnings of the Easter Offensive 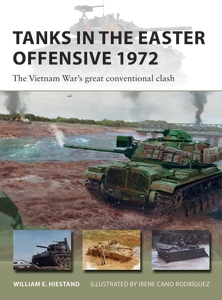 My New Vanguard title for Osprey: NVG 303 Tanks in the Easter Offensive 1972: The Vietnam War's great conventional clash looks at the employment of the North Vietnamese Army (NVA) and the Army of the Republic of South Vietnam (ARVN) tanks and armored fighting vehicles during Hanoi’s 1972 offensive. I was only able to briefly touch upon the first battles between the two sides’ tanks, however, which took place the previous year as ARVN forces launched Operation Lam Son 719 against NVA logistics bases in Laos. ARVN M41A3s successfully engaged NVA PT-76s and even T-54 medium tanks during the operation, but overall Lam Son 719 proved a failure for Saigon at the operational and strategic levels.

In 1970, the US was beginning to withdraw its forces, while working to improve the capabilities of South Vietnamese forces. To help buy time to improve the ARVN, allied units launched an offensive into Cambodia in 1970 to destroy NVA logistical bases. The attack met little opposition but destroyed mountains of supplies and set back Hanoi’s plans to launch a major offensive against the south. As a result, Washington and Saigon planned a repeat performance, this time aimed against NVA logistical base areas located around the town of Tchepone in southern Laos. The attack would use elite ARVN units – the Marine and Airborne divisions, the capable 1st Infantry Division, elements of the 1st Armored Brigade, and a Ranger group. The 1st Armored’s M113 APCs M41A3 tanks would attack down Highway 9 along with the Airborne Division while Ranger battalions established defensive fire support bases (FSBs) to the north and the 1st Division did the same in the south. At this point US troops were prohibited by the US Congress from operating outside South Vietnam and would only support the attack from the air.

A US mechanized task force kicked off the attack by opening Highway 9 up to the border, and US and ARVN forces reactivated the base at Khe Sanh, which had been abandoned after the famous 1968 siege. ARVN forces moved through the US positions and began the attack into Laos on 8 February. Highway 9 turned out to be much poorer going than hoped, a single-lane road with high shoulders and jungle on both sides that hindered vehicles’ ability to maneuver. Worse, the road and surrounding area was pockmarked with craters from years of US bombing operations against the Ho Chi Minh Trail. Despite these obstacles, the M41s and M113s pushed ahead, covering nine kilometers on the first day while the flanking forces established FSBs to protect the northern and southern flanks.

The ARVN column managed another two kilometers on the second day of Lam Son 719, and reached its first objective, A Lướ. Resistance was light, but there the operation came to an abrupt halt. South Vietnamese President Thiệu had intervened, directing his commanders to proceed cautiously, and saying he would cancel the operation if the ARVN suffered 3,000 casualties. Thiệu wanted to avoid heavy losses to the elite units that he counted on for regime protection against coups and was further worried that losses would weaken his support in the presidential elections scheduled for later in the year. As a result, the ARVN attack lost all momentum and the NVA was able to mass forces to strike back. By the end of the month, the NVA had built up four divisions in the area to match the ARVN’s three, and the Ranger FSBs to the north were hit by heavy artillery fire and overrun by troops led by T-54 tanks – their first use during the conflict.  The US responded with airstrikes and helicopter gunship support, but the NVA had positioned over 200 anti-aircraft guns in the area that inflicted heavy damage and losses on the helicopters.

At this point, the M41A3s first engaged NVA tanks. The ARVN Airborne Division was under heavy attack at FSB 31 to the north of A Lướ, and M41A3s of the 17th and 11th Armored Cavalry Regiments (battalion-sized units with two-three companies of M113s and a company of M41A3s) were sent to its relief. Command confusion between the airborne and armor hindered operations, but on February 27 the ARVN light tanks situated on a hill near the FSB spotted and engaged a company of T-54s. One NVA tank’s fuel tank was hit, and the T-54 exploded and flipped over. Accounts differ on the precise number of NVA loses, with General Donn Starry’s survey of armored combat in Vietnam reporting six T-54s and 16 PT-76s lost in the first clash, and three T-54s and 12 of the light tanks lost the next day. The ARVN only lost six M113 armored cavalry fighting vehicles in the first engagements.

The M41A3 was more than a match for the PT-76 light amphibious tank, but the ARVN success against the much better armored and armed T-54 mediums is remarkable. The ARVN crews had been operating M41A3s for years and were likely able to exploit the M41A3’s ability to fire multiple rounds a minute to hit and continue to hit their opponents. The inexperienced T-54 crews do not appear to have returned fire effectively and may have bailed out of their tanks as they took hits, even if the rounds did not penetrate the armor. It’s also possible some NVA tanks claimed by the ARVN had been previously disabled by air attack.

While ARVN tanks did well in tank-vs-tank combat, overall, the operation floundered. As NVA forces flooded into the area and the AAA network exacted a heavy toll on US air and helicopter support, Saigon had to adjust Lam Son 719’s goals. No longer would the ARVN hold the area and systematically destroy the NVA logistics bases. Rather, infantry of the 1st Division would be lifted by helicopter to LZs around Tchepone for propaganda purposes. The 1st seized the town on 7 March, and the withdrawal began the next day.

The retreat, executed under strong NVA pressure, soon degenerated into a rout. By this point, ARVN forces amounted to portions of three divisions, around 8,000 withdrawing troops, and the NVA was attacking with 40,000 men with strong artillery and tank support. The 1st Infantry, Marine and Airborne divisions had to evacuate a series of FSBs while under heavy attack. Photos of South Vietnamese soldiers clinging to the skids of US helicopters revealed the desperate nature of the retreat. The 1st Armored Brigade faced disaster as it tried to pull back over Highway 9. NVA elements continually ambushed the column and harassed it with artillery. The 1st had lost around 60% of its vehicles when, reaching a point five kilometers from the Vietnamese border, it turned south into the jungle due to a report that two NVA regiments were blocking the rest of Highway 9. ARVN command and control confusion had doomed the armor – airborne forces had cleared the road, but the information never reached the column. Fighting their way through the jungle, the 1st Armored Brigade lost or abandoned its vehicles including 54 M41A3s and 87 M113s.

While Saigon claimed victory, its elite forces had been severely mauled, and the ARVN had been unable to dismantle the NVA logistics infrastructure in southern Laos. There had been strategic benefits, however. The NVA preparations to launch a full offensive against the south were once again delayed for a year. With respect to armor, the US and ARVN were now fully aware of the NVA’s ability to employ large numbers of tanks. To meet the threat posed by NVA T-54s, the ARVN requested medium tanks from the US, and as a result three battalion-sized M48A3 squadrons were planned. Only the 20th Tank Squadron had completed its training in early 1972, and when the NVA launched the country-wide Easter Offensive, it would match its M48A3s against NVA T-54s and PT-76s.