In today's blog post, author Mark Stille examines one of the most important and controversial decisions of the battle. 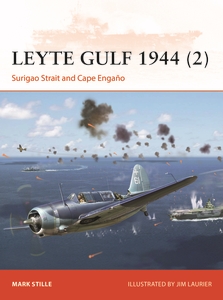 In a battle as complex as Leyte Gulf, one decision stands out as the most important and as the most controversial. The decision in question was made by Admiral William Halsey. It took the US Third Fleet to the north, away from Leyte Gulf, to engage the Japanese carrier force commanded by Vice Admiral Jisaburo Ozawa. This was exactly what the Japanese wanted, since Ozawa’s force was comprised of only four carriers with a total of 116 aircraft – equal to one of Halsey’s fleet carriers. Ozawa’s force was in fact a lure to bring the Third Fleet to the north to allow the main striking force under Vice Admiral Takeo Kurita to burst out of the San Bernardino Strait and move south into Leyte Gulf to strike any American shipping located there. When presented with the choice of moving north and leaving the path to Leyte Gulf open, Halsey decided to go after and crush Ozawa’s force.

In fact, Halsey’s choice was preordained. In the aftermath of the Battle of the Philippine Sea, which resulted in the almost complete destruction of Japanese carrier aviation, the Americans did not understand the full scope of the Imperial Japanese Navy’s (IJN’s) defeat and the fact that the Japanese had no prospects of replacing their lost aviators. Because the majority of the Japanese carriers survived the battle, and the Americans knew other carriers were being added to the force, the IJN’s carrier force was still a threat. The intelligence Halsey received on the IJN’s carrier force indicated that it was fully capable. In every other major battle of the war, the IJN’s carrier fleet was the main threat. The Pacific War had become a carrier war and surface forces had been firmly supplanted as the primary striking force. The fact that the Japanese plan at Leyte Gulf made Kurita’s large force of battleships and heavy cruisers the primary striking force was unknown to the Americans.

Kurita’s force was heavily attacked by the Third Fleet on October 24. Reports from Halsey’s aviators indicated the Japanese force was heavily damaged, so much so that it turned to the west in the early afternoon. The assessment of the aviators was that Kurita’s force no longer posed a threat. Halsey had no way of knowing the degree to which his strikes had overconcentrated on superbattleship Musashi, leaving most of Kurita’s force battle ready. As Halsey knew, no surface force could withstand such a pounding and remain a threat. But Kurita turned back to the east after Halsey’s air attacks were over. This movement was tracked by night-capable aircraft from light carrier Independence. Halsey and his staff dismissed these reports. By this point, after the late-afternoon discovery of Ozawa’s carrier force, Halsey had other things on his mind.

The last major Japanese force, under Vice Admiral Shoji Nishimura, had been sighted and briefly attacked by Halsey’s carriers on the morning of October 24 as it headed to Surigao Strait. This small force could be easily handled by the Seventh Fleet’s surface forces when it entered Surigao Strait.

Given all these developments, at 1950hrs on October 24 Halsey ordered his entire force (designated Task Force [TF] 38) north to crush what he assessed as the primary threat – Ozawa’s carrier force. He decided to do so with the entirety of his force – all three carrier task groups available to him. Within these task groups were six of the most modern battleships (the basis for TF 34) in the world. These also went north with Halsey. By so doing, he decided to ignore the threat posed by the Kurita force that was headed toward San Bernardino Strait. He kept his whole force together because that was how TF 38 fought and because, as he stated after the war, he did not want to divide his force in the face of the enemy. A decisive victory was most likely if the carriers of TF 38 worked with the battleships of TF 34. This was USN doctrine and Halsey fully supported it.

Destruction of the IJN’s carrier force would constitute a decisive victory. Not only would it eliminate the main threat to the invasion, but it would also cripple the IJN’s ability to interfere with future operations.

Invariably, Halsey’s logic that Ozawa’s force was the primary threat, and that TF 38 had a golden opportunity to focus on it and destroy it, met a host of real-world events that denied Halsey the battle of annihilation he desired so much. At 1640hrs on October 24, Halsey alerted his task group commanders to get ready to form TF 34. This was not an execution order but was picked up by Vice Admiral Thomas Kinkaid, commanding the Seventh Fleet, who assumed it was. From this misconception, Kinkaid made several assumptions. He assumed that Halsey had formed TF 34. He assumed this was done with the purpose of defending the San Bernardino Strait. He assumed that with San Bernardino Strait covered, he could focus on Surigao Strait, which he knew was the target of an advancing Japanese force.

Faced with at least two targets, Halsey had the strength to divide his force and defeat both Ozawa and Kurita. But he resisted this notion for several reasons. First, it was against the principles of war to do since it gave the enemy the opportunity to defeat his force in detail. He considered leaving TF 34 and TG 38.2 to cover San Bernardino Strait, but decided against this because of the over-inflated threat from Japanese land-based aircraft. Most of all, he wanted to keep TF 38 concentrated to deliver a decisive blow against the Japanese carrier force. In the end, Halsey decided to take his entire force to go after Ozawa. Not a single ship was left to defend or even watch San Bernardino Strait. The decision was relayed to Kinkaid but was unclear and left the impression that TF 34 was left guarding San Bernardino Strait.

The orders to move TF 38 north were issued at 1950hrs. The disquieting information from one of Independence’s aircraft at 2005hrs that Kurita’s force was again headed east prompted concern among several of Halsey’s subordinates. Rear Admiral Bogan (commander of TG 38.2), and Vice Admiral Lee, commander of TF 34, were among those. Lee’s signal that Kurita was the main threat was ignored by Halsey. The commander of TF 38 Vice Admiral Marc Mitscher refused to even try to change Halsey’s mind stating, “If he wants my advice, he’ll ask for it.”

While many of Halsey’s subordinates had serious qualms about Halsey’s plan to take his entire force north at the time, most criticism against Halsey has been made with the benefit of 20/20 hindsight. Knowing that Ozawa’s force was toothless and that the power of Japanese land-based aircraft had already been expended, it becomes obvious that Halsey should have divided his force and engaged both Ozawa’s and Kurita’s forces. Using the three carrier task forces and TF 34, a superior force could have been sent to engage both Japanese forces. This would have been a nuanced approach against Halsey’s character, against existing USN doctrine, and against Halsey’s ability to command distributed forces. Once Halsey had it in mind that the Japanese carrier force was the primary threat, his actions were virtually preordained.

The book is availble in all formats on our website here