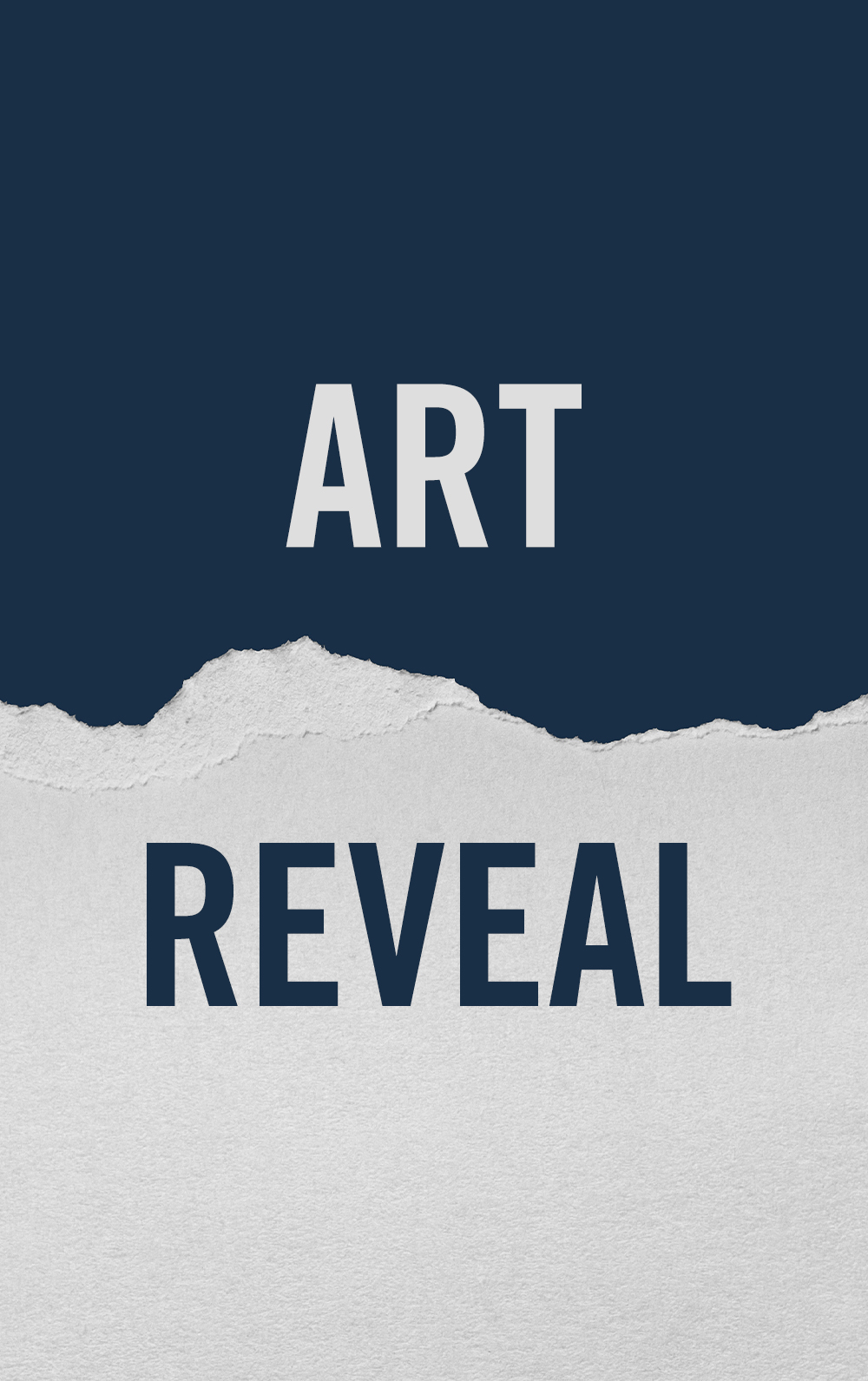 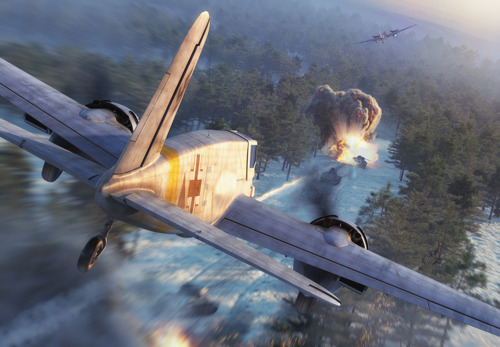 Throughout the 71 days of the airlift, the Luftwaffe faced intense demands on its limited resources to support its hardpressed ground forces as it tried to fly supplies to the Stalingrad pocket. While the 4th Air Fleet was devoting all available support to Manstein’s Winter Storm offensive to break through to Paulus, the Soviets launched Operation Little Saturn on December 16 against the Italian Eighth Army on the Don River. Like all of the German allied forces during the campaign, the Italians were spread thin, lacked reserves, and did not have adequate anti-tank weaponry to cope with Soviet armor. The Luftwaffe diverted all available aircraft to support the Italians.

Although it has the reputation of a consummate ground support air force, the Luftwaffe had relatively small numbers of wings in its order of battle specifically designated “Schlacht” (attack), exclusively organized for close air support. In 1942, the wings were equipped with small numbers of Bf 109E/Bs outfitted for ground attack, and the specialized Hs 123 biplane and Hs 129 ground attack aircraft. The Hs 129 had an armored “bathtub” much like the Il-2 Shturmovik, but the initial production model was considered underpowered. After the fall of France, the Hs 129B version was outfitted with more powerful French Gnome-Rhône 14M engines.

In the battle scene two Hs 129s of the 4th Air Group/1st Attack Wing attack Soviet armored columns using their MK 101 centerline 30mm cannon. The Luftwaffe claimed a total of 14 tanks and 28 aircraft destroyed on the first two days of the Soviet offensive. German air support helped the Italians hold out for several days, but the weight of Soviet ground and air attacks eventually smashed the 8th Army’s defenses, and the Red Army was able to exploit the breakthrough to send two tank corps to raid the primary Luftwaffe airlift fields at Tatsinskaya and Morozovsk. 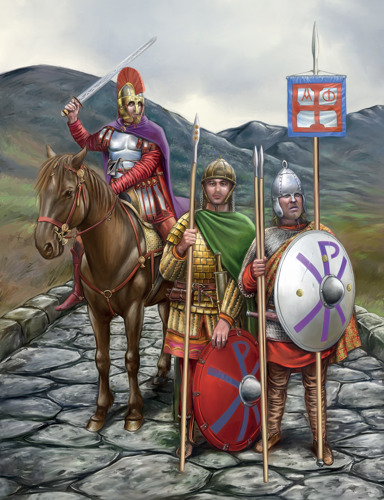 WALES AND THE SOUTH-WEST, 7th–8th CENTURY

(1) Cadwallon of Gwynned, AD 633 We have chosen to reconstruct the great northern Welsh victor Cadwallon (Catguollaunus), ‘leader of the hosts of Britain’, as a true Late Roman warlord. His muscled cuirass, an echo of Roman commanders, is inspired by Taliesin’s mention in the Cedair Theirn On, apparently describing Ambrosius Aurelianus ‘clad in a legionary lorica (lleon lluryg)’. His sword is based on fragments of a magnificent pattern-welded blade found at Gresford, near Wrexham in the Welsh Marches.

(2) Sub-Roman penteulu, Dumnonia, 7th century. An important slate found in Tintagel, Cornwall, shows a subRoman Dumnonian warrior armed with a sword and small round shield; this forms the basis of our attempted reconstruction of a ‘unit commander’. The graffito shows two warriors wearing conical helmets, one apparently of Spangenhelm construction, and an armour, here reconstructed as a copper-alloy squama from the Stenton finds, worn over padded protection. His weaponry is copied from that of the Cornish lord’s burial at Lowbury Hill. The Chi-Ro on his shield is taken from the cross patterns of the Hayle and Phillack stones in Cornwall.

(3) Toisech, Powys, c.750. An elite commander, this mail-clad warrior serves King Elisedd ap Gwylog of Powys. The helmet is reconstructed from the Welsh whetstone find, and seems to prefigure the Northumbrian Saxon Coppergate specimen from York. The javelins and the shield umbo are from finds on the Isle of Favret in Brittany. We have given him an expensive gold embroidered cloak of imported silk; such quality would deserve an equally costly brooch, like the pseudo-penannular Llys Awel Farm find decorated with gilding, glass beads and amber studs. The flag bears the Christian emblems visible on Welsh stone monuments. 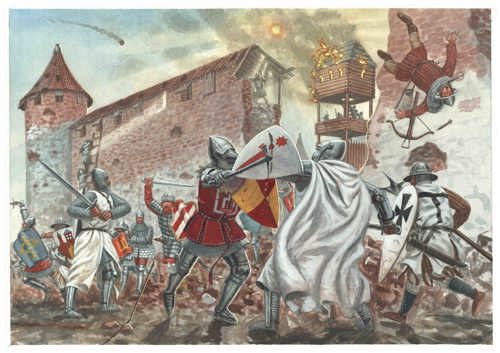 On 16 April 1362, as the collapse of Kaunas Castle’s inner walls makes a Teutonic assault both inevitable and irresistible, the remaining defenders of the castle launch one last, doomed sally. They are led by their captain, Vaidotas, who bears a shield he has had to take from a fallen ally, and while they are fighting valiantly, they are massively outnumbered. Vaidotas himself will manage to defeat the Livonian Order Sword-Brother trying to block his path, but this delays him long enough that he will be surrounded and subdued. A few Lithuanian archers and crossbowmen are still defending the walls, but as attackers swarm up siege ladders, it is just a matter of time until the defenders are overwhelmed. Meanwhile, catapults continue to launch balls of flaming resin into the inner precincts of the castle, igniting the last wooden buildings still standing.