On the blog today, author Gordon Williamson introduces us to his new book 'Hitler's Navy.' 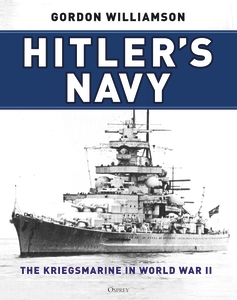 Grossadmiral Raeder on the outbreak of WWII:-‘The surface forces, moreover, are so weak and so few in numbers vis-à-vis the British fleet that the only course open to them-presupposing their active employment-is to show that they know how to die gallantly and thereby to create the basis for an eventual rebirth in the future.’

Although the military service of members of my own family has been almost exclusively with the army, I have long had a passionate interest in the history of the German Navy and had the good fortune to be able to correspond and meet with a good number of veterans of the Kriegsmarine. No one could avoid the fact that the Kriegsmarine served a vile regime and no doubt some of its sailors were supporters of that regime, but with very few exceptions, the Kriegsmarine fought a ‘clean’ war. Sailors on both the German and Allied sides faced not only the dangers of armed conflict with the other, but also the rigours of life at sea in often horrendous weather conditions where the chances of survival if their ship sank could be vanishingly small. Both sides made efforts wherever possible to rescue survivors of enemy ships. Once a ship had been sunk, survivors were usually seen as fellow seamen first and enemies second and were treated well. There were many cases of former naval foes meeting on friendly terms after the war and being invited to each other’s reunions.

My late father-in-law served on a British destroyer on escort duties with the Russian convoys, whilst one of his best friends was a former Kriegsmarine sailor from the Admiral Scheer which operated against these very convoys. Each could empathise with what the other had gone through during their military service, much more than any civilian friends.

After the end of WWI, with the High Seas Fleet scuttled at Scapa Flow, Germany was left with little more than a small number of coastal craft and a few obsolete dreadnought types, suitable for no more than training duties. From these meagre beginnings a fleet of powerful ultra-modern warships would arise, giving Germany an admittedly small, but highly effective navy of ships for the role they were intended to serve, commerce raiding. In addition, the Kriegsmarine would also soon have the most successful submarine fleet in the world.

In spite of post-war restrictions imposed by the Treaty of Versailles, Germany produced some of the finest ships of the era; many built using cutting-edge technology and fitted with new, often untested technology, which sometimes resulted in vessels entering service before flaws had been fully eliminated. Although Germany classed both the Bismarck and Scharnhorst classes as battleships, only Bismarck and Tirpitz were true battleships, Scharnhorst and Gneisenau being more accurately considered as ‘battlecruisers’. In addition, the infamous ‘Pocket Battleships’ were classified as ‘heavy cruisers’ by the Germans, and bore the same type of main armament as the Scharnhorst and Gneisenau. One key drawback for the Kriegsmarine was its lack of air power with not a single aircraft carrier to its strength.

Despite the power of these vessels, Germany was still no match for the Royal Navy, with its 19 battleships and 46 aircraft carriers. Only in the field of submarines did the Kriegsmarine have the advantage with just over 1,100 U-Boats to the Royal Navy’s 264. This was reflected in the enormous amount of Allied shippage sunk by German U-Boats during the war –over 14 million tons sent to the bottom of the sea. Even here though, rapid advances in the quality of Allied anti-submarine measures eventually overcame the threat and what started as a huge success for the U-Boats became unsustainable with heavy losses.

Hitler’s Navy, highly illustrated and detailed, brings together a wide range of information from my other New Vanguard titles to demonstrate the warships, vessels, service personnel and operations of the Kriegsmarine during WWII.  Including all major types of German vessels, from famous battleships such as Bismarck and Tirpitz, to heavy and light cruisers, destroyers, U-Boats, E-Boats down to the many varied types of coastal vessels in use at the time, it also reveals the human side of this intriguing naval force, describing training, equipment, uniform and duties, together with awards won for service. New information on naval-ground units such as the Marine Artillerie which fought in field-grey uniform rather than naval dark-blue is given plus a comprehensive overview of other land-based units such as naval infantry, naval auxiliaries and naval police.

It is my hope that bringing together all this information together into one book will encourage readers to delve deeper into all aspects of the history of the German Navy.