In today's blog post, we're looking at three fantastic pieces of artwork from three of our August 2022 titles. Let us know what you think in the comments section and, if you would like to see any artwork from any of our September titles, be sure to mention that too!

CAM 382: Carrhae 53 BC Rome's Disaster in the Desert by Nic Fields 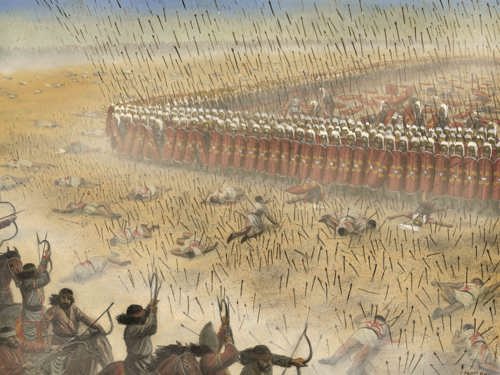 With their highly developed tactic of rapid-fire barrage shooting, the usual opening manoeuvre was for the swift-riding Parthians to wear down the enemy from a distance. Accordingly, successive bands of fast-moving horsemen would advance, wheel and retreat, shooting volleys of arrows as they did so. The latter would be done at high elevation, a skill developed by steppe nomadic horsemen, which meant arrows would land almost vertically on an area target. At a long range of 200-odd metres their shooting was less accurate, but it could still disrupt and disturb the enemy. Each successive band would relieve the one before to keep up an incessant barrage. Their tactics obviously sought to exploit their abilities with the bow and their mobility, usually by staying out of reach of their opponents’ weapons, which in the case of the Romans was none too difficult. Besides, the composite recurve bow simply outclassed any opponent’s weapon. This skirmishing would continue until the enemy was sufficiently weakened or demoralized. Once this was achieved, it was the moment to close in.

The Parthians’ favourite, and winning, battlefield tactic was to outflank, harass and even encircle the foe; here their strengths of speed, mobility and firepower were exploited to the full. Riding at full gallop and parallel with the enemy, the archer turns in his saddle and shoots sideways – the arrow flying almost flat – reloads and shoots again, and again. The archer’s technique here would be to release his shot when the horse is in full flight. So as to loose one arrow after another at speed, he holds three arrows in his left hand against the bow. Being 40-odd metres from the enemy meant it was close enough to pierce shield and armour, but out of javelin range and far enough from the enemy to evade a counter charge.

In this reconstruction we witness the thick of battle; the sky is darkened with arrows and the red dust as thick as soup from the hooves of wheeling horses, and the air ringing with the thunder of drums and cymbals. We are looking on the Roman hollow square (1); at its centre is Crassus, who is protected by two burly centurions (2). Legionaries face the enemy (3), while centurions, busy with their vine sticks (4), harangue their men. On the outside, the Parthian horse archers (5) are doing their ugly work. 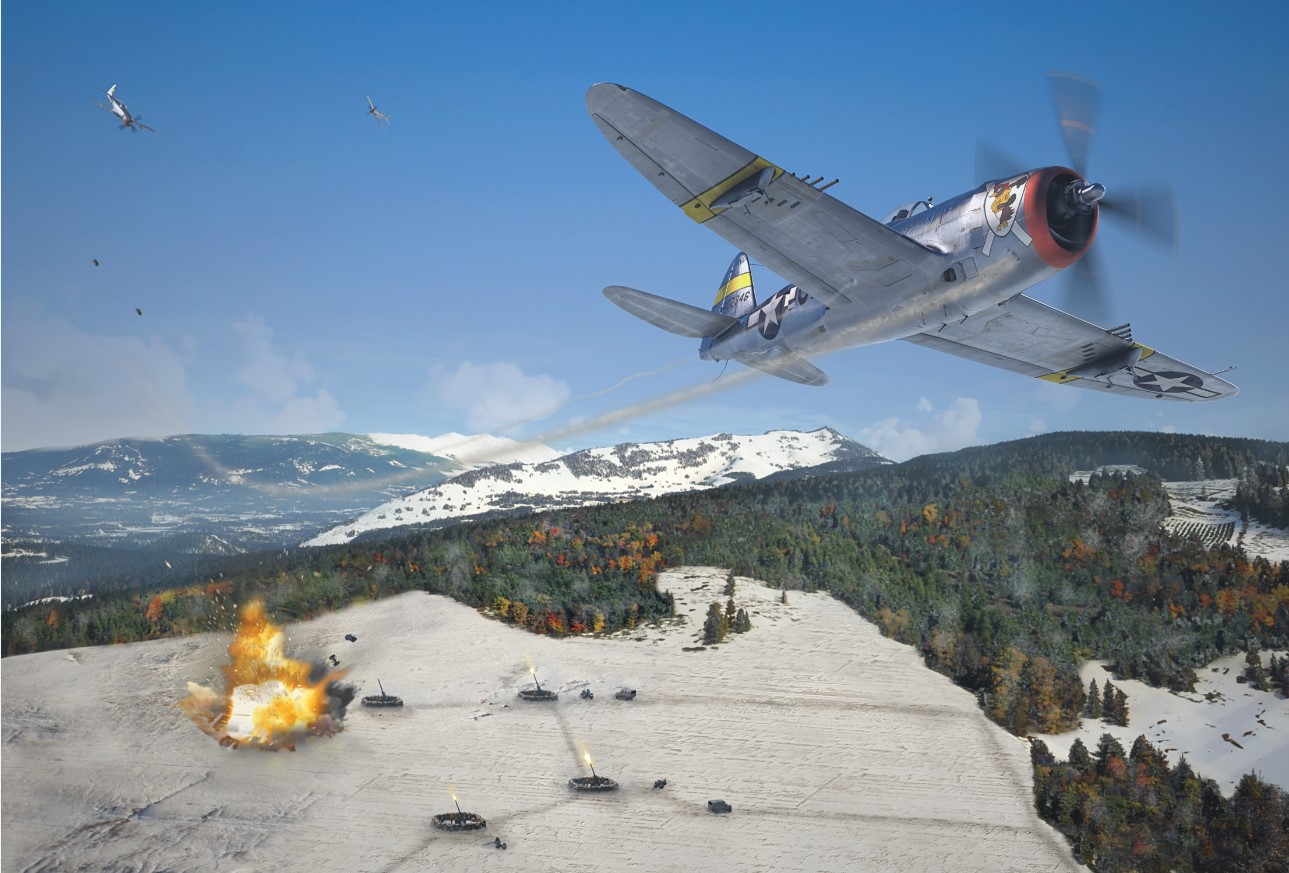 On February 13, 1945, 12 B-25s from the 486th Bomb Squadron headed for San Ambrogio in the Brenner Pass intending to bomb a rocky mountain outcrop that would precipitate a landslide, blocking the main road. It was cold, but other than a ground haze the weather was clear. The P-47s from the 66th Squadron, 57th Fighter Wing, escorted the bombers. When enemy fighters failed to appear, the P-47s switched their job to flak suppression. Second Lt Donald C. Spalinger led the flight of fighters, diving on the gun positions in the hope of silencing them, or at least distracting them from targeting the bomber formation. He dove right down the throat of the guns, released his bombs, and pulled out of the dive. His wingman 2nd Lt George M. Blackburn, following him in, saw white smoke trailing from Spalinger’s “jug.” He radioed to him, “Bail out! Bail out!” but received no reply. Now flames were streaming from the engine. The fighter continued to climb until it stalled out; dropping crazily off the left wing, it fell out of the sky. The bombers plastered the mountain with bombs, but the mountain refused to budge so the main road through San Ambrogio remained clear. Two of the B-25s from the 486th Bomb Squadron failed to return to base. The mission was a complete failure. 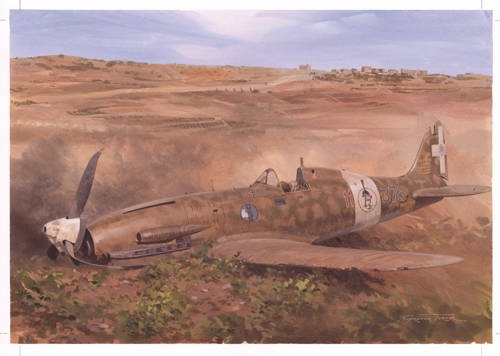 Ta’ Qali was bombed and rendered temporarily unserviceable during a raid on Monday morning, 27 July 1942. Nine Ju 88s were escorted towards Malta by German and Italian fighters. Eight Spitfires were already airborne from a previous alert. Additional Spitfires were scrambled as the raid approached. At least two Macchi C.202s were shot down, both by Canadian Sergeant George ‘Screwball’ Beurling of 249 Squadron. Capitano Furio Niclot Doglio, commander of 151a Squadriglia C.T., was killed. Sergente Maggiore Faliero Gelli of 378a Squadriglia C.T. crash-landed in a tiny field at Ta’ Kuljat, Gozo. The injured pilot (1) was taken prisoner. The ‘Cat and Mice’ emblem of 51o Stormo C.T. (2) was later cut from the starboard side of the Macchi fuselage and the rudder (3) dismantled. Beurling would pose with these trophies for what would become the best-known photograph of Malta’s top-scoring fighter ace (see page 93).