On the blog today, author Nic Fields takes us through Athen's rise and what was required for empire building. 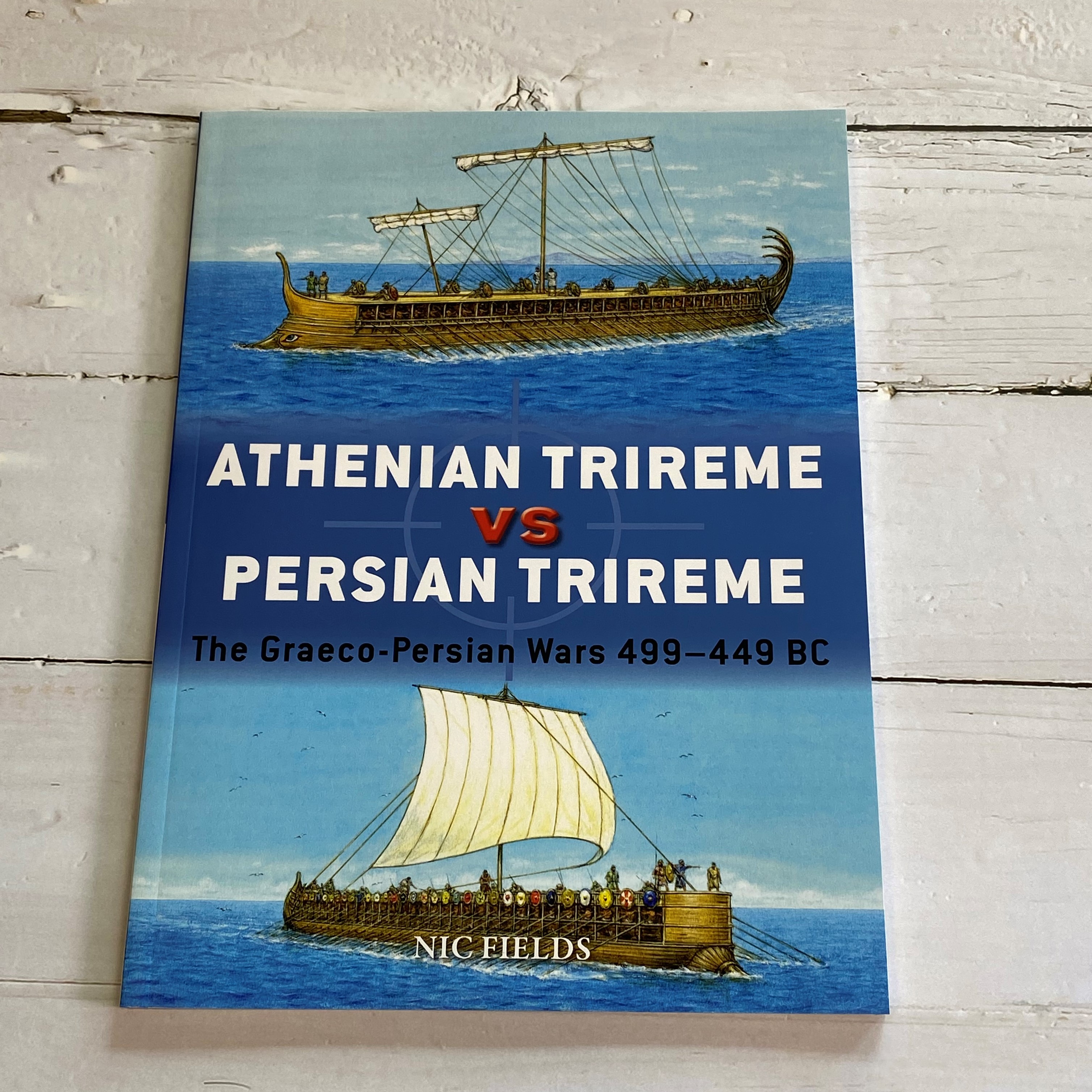 Democratic Athens was born to rule the seas. Athens achieved that, but nothing lasts forever. It built and lost a maritime empire over the course of seven or so decades, the tragic outcome of its defeat in the multi-decade Peloponnesian War (431–404 BC). This was the destructive face-off between Athens and Sparta, a catastrophic conflict which widely raged across the length and breadth of the Greek world and for that reason alone has rightly been described as a ‘world war’ in miniature.

Now, the best book on war per se must be History of the Peloponnesian War by Thucydides. This book cannot be matched when it comes to the causes of war, civic self-immolation, democracy in war, morality and ethics, diplomacy and coercion, wartime leadership, imperial overreach, chance, foresight, and so on. This unfinished masterpiece of historical literature (it ends abruptly mid-sentence amid the events of 411 BC, seven years before the actual end of the war), is our most important single source for the rise of 5th-century BC democratic Athens. Obviously, as an Athenian himself, Thucydides was an eyewitness to many of the events and personalities he describes, or at least was able to gain information from reliable sources, and for that reason Athenian imperialism is a conspicuous theme in his work. Thucydides was not a political scientist, but an astute observer and explicator of the human condition in collective conflict.

However, a word of warning for those wishing to read Thucydides: his is a densely written narrative, which does not furnish the reader with alternative accounts, unlike the style of his literary predecessor Herodotos. It is therefore sometimes easy to mistake the author’s account of events as an authoritative narrative. The speeches are an especial problem. Thucydides claims he wrote what he could remember of the speeches that he heard, but also wrote what seems likely to have been said on an occasion; you might imagine the problems, therefore.

Let us return to the rise of Athens. Xerxes’ great invasion of Greece had driven the Athenians to abandon their homeland and fight the enemy at sea: in the words of Thucydides, the Athenians, having abandoned their homes and possessions, ‘took to their ships and became seamen’ (1.18.2). For the Athenians the gamble was certainly to pay off. Following the humiliating defeat of Xerxes, Athens was no longer simply a local naval power. With the largest (and best) combat navy in the Greek world it extended its sea legs in consistent, distant operations. Nonetheless, this daring adventurism was to cause a sharp shift in the balance of power between rivals. As Thucydides himself believes, the real cause of the Peloponnesian War was ‘the growth of Athenian power, which terrified the Spartans and forced them into war’ (1.23.6). This was an excessive reaction to the fear of losing one’s supremacy, the Spartans having unwittingly stumbled into the trap inherent in balance-of-power thinking.

Historically speaking, empire building relies on three dynamics. First come overseas trade networks: in the case of Athens this was via its maritime links across the Aegean Sea. Following close behind comes the overseas establishment of a string of military bases girdling the newly gained sphere of influence: Athens planted klēroukhies or colonies, usually of a thousand citizens with their wives and families. All in all some 450 klēroukhies were established by Athens. Last, nascent empires spin a narrative to justify their colonial activities, the sort of comforting storyline predatory imperial powers prefer: Athens claimed to be a democratising force, bringing such intangible goodies as isonomia, equality under the law, and isomoira, equality of opportunity. Athens was then a maritime empire, and it ruled over the islands of the Aegean with an iron fist while also harbouring a thirst for imperial expansion.

And what did Athenian imperialism look like in the raw? One instrument of control was the compulsory use of Athenian coinage and weights and measures. Another was regulation over imports and exports throughout the Aegean. Yet another, democratic governments were common throughout the Athenian empire by 411 BC. Finally, and perhaps more invidious, there was the Citizens Decree imposed by Perikles, the foremost statesman in Athens at the time. This law held that both parents had to be citizens of Athens to qualify for Athenian citizenship. Previously, only the father had to be such. Following the promulgation of Perikles’ decree, in the eyes of Athenian law there is now an unambiguous difference between a citizen of Athens and a citizen from one of its vassal states. Athenians themselves would now think twice before marrying a métoikos, a foreign resident of Athens. All in all, Athens was making sure that its interests in the Aegean were secured and that its rival, Sparta, would not be able to intervene in that region.

Athens was not only safeguarding its empire through force and fear, but it was ruling over others in defiance of justice, too. In his Melian Dialogue, Thucydides offers his readers a less reassuring insight into what was the cruel reality of Athenian imperialism when he sets out in a discourse the tragic fate of a small autonomous state that happens to be in Athens’ way. Regarding the future of the island of Melos, which was currently neutral in the bipolar world of Thucydides, the demands of the Athenian emissaries were that the Melians should pay tribute to Athens and become, in effect, part of its empire. So as to concentrate their minds, an Athenian flotilla was floating just off Melos with orders to bring fire and sword to the island if the Melian magistrates did not accept Athens’ terms. In the blunt, chilling language of the Athenians: ‘Those in position of power do what their power permits, while the weak have no choice but to accept it’ (Thucydides 5.89). For a prognosis, might makes right, so surrender or be destroyed. Refusing to surrender and resisting the Athenian siege for as long as they could, the Melians suffered obliteration in the end at the hands of the Athenians – all surviving men were executed, all the women and children were sold into slavery. A klēoukhia was then established on the island. Where the Phoenicians once bobbed about, now Athena rules the waves.

Empires have no true friends, only egocentric interests. Augustine, the bishop of Hippo and future saint, retells the tale of the captured pirate hauled before Alexander the Great, who promptly demands what he meant by molesting the seas. The notorious pirate unflinchingly replies: ‘What do you mean by seizing the whole earth; but because I do it with a petty ship, I am called a robber, while you who does it with a great fleet are styled emperor’ (City of God 4.4). Size does matter.

This brings us to an anecdote of Xenophon, the soldier historian who picks up the narrative of the suicidal struggle of Greeks against Greeks from the point where that of Thucydides breaks off seven years before its end. The year is 406 BC and recently the Spartans and their allies have been enjoying some success on the high seas. The week before he fell overboard and drowned, the Spartan naval commander Kallikratidas sent an abusive albeit concise communication to his opposite number, the Athenian Konon: ‘I am going to stop your adulterous affair with the sea. She belongs to me’ (History of My Times 1.6.15). Quite clearly the brash young admiral from Sparta branded the maritime empire of Athens as illegitimate and so challenged it to a nautical duel. Sorry to say, he was to vanish beneath the waves when his flagship rammed an Athenian trireme. Because of course, after hubris comes nemesis. For Athens itself, that unhappy fate was another two years down the road.

If you enjoyed today's blog post you can read more in DUE 122: Athenian Trireme vs Persian Trireme here