In today's blog post, we're looking at three fantastic pieces of artwork from three of our April 2022 titles. Let us know what you think in the comments section and, if you would like to see any artwork from any of our May titles, be sure to mention that too! 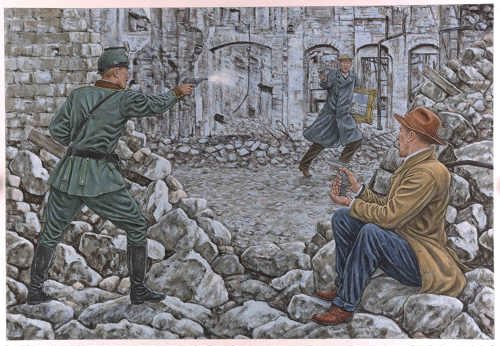 The first image in our reveal, requested by Adam C, shows German police encountering a looter in the summer of 1944. In a German city reduced to rubble by Allied bombing, two policemen confront a looter absconding with a valuable painting. The Ordnungspolizei (uniformed police) man fires his Walther P 38 at the looter, while his Kriminalpolizei (plainclothes police) colleague shelters behind a wall while reloading his PPK. The looter has responded by firing a Luger in the direction of his adversaries. 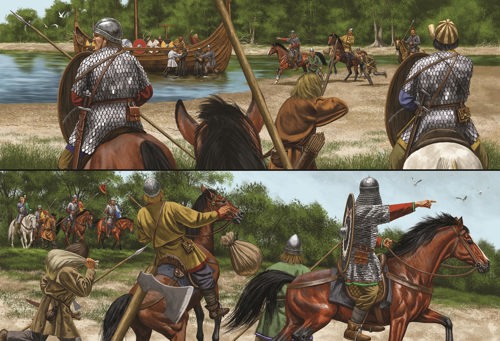 The second image in our reveal, depicts an encounter between the Vikings and Franks.

Frankish view: A Frankish scouting party stumbles upon a group of Vikings retreating from their island encampment. Supported by a dismounted archer, the mounted Franks bear winged lances, helpful in harassing the enemy while engaging them from a distance. One scout sounds a horn, alerting nearby troops. Though outnumbered, the Franks possess the high ground and understand that the Vikings intend to flee with their booty. Hoping to liberate the captive clergymen, and to take back the portable items the Vikings have purloined, the Franks await reinforcements. The Frankish scouts, some wearing the iconic Frankish helmet which slopes down the wearer’s neck, are clad in scale armour, wearing linen beneath this. Smallscale skirmishes such as the one depicted here were common in Viking Age Francia.

Viking view: The Vikings quickly move to the safety of their longship, keen to avoid combat to protect their lucrative plunder, which includes human cargo. Not expecting to encounter the detachment of Franks close to their island base, the Vikings are lightly equipped, better suited to rapid movement than to pitched battle. The typical Viking helmet, conical in shape, is worn by some of the retreating Northmen. Wearing a Gjermundbu-style helmet, with a spectacle-shaped facial guard and mail aventail intended to protect his neck, a well-armoured Viking chieftain is ordering his men to fall back to the safety of their longship. A mounted member of the chieftain’s retinue is struck by an arrow in the heart, killing him instantly and causing him to drop a sack of valuable loot. 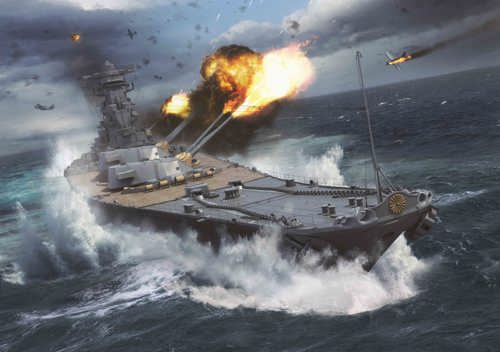 The final image in our reveal shows Yamato's last stand in the East China Sea, 1945. Yamato the world’s greatest battleship, is seen a few minutes into her last battle at 1245hrs, April 7, 1945. Steaming hard at her flank speed of 27kts, Yamato and her nine escorts have just fallen under attack by Task Force 58’s first wave of 227 US planes. Just moments earlier Yamato suffered her first damage when Bennington Helldivers planted two 1,000lb armor-piercing bombs amidships. The resulting fires, immediately aft of Yamato’s mainmast and nearly atop her after 6.1in. turret, will rage the rest of the battle.

TBM Avengers, from Hornet’s VT-17, are making their torpedo runs against Yamato. During this initial attack wave, the Americans score their first torpedo hit against Yamato’s portside hull. By 1945 the Americans’ notoriously poor Mark 13 aerial torpedo had been greatly improved and was armed with a 600lb Torpex warhead, which was 50 percent more powerful than TNT.

Most of Yamato’s antiaircraft battery is still intact, most conspicuously her nine huge 460mm (18.1in.) main guns (3). They are firing specially designed Sanshikidan (Type 3) antiaircraft shells at the Americans. Weighing 2,998lbs, each 460mm Sanshikidan shell was filled with 966 incendiary tubes and 600 steel stays. A 460mm Sanshikidan shell’s time-delay fuze was usually set to detonate one second after leaving the muzzle, which translates to 1,000m (1,100yds). Upon detonation, each Sanshikidan round was designed to burst into 2,846 fragments. These were thrown forward in a 20-degree-wide cone. Each of the 966 incendiary tubes would emit, for five seconds, a 16ftlong, 5,400-degree F flame. A Sanshikidan shell was theoretically effective up to 3,000yds forward from its burst, or 4,100yds from Yamato. But although the Sanshikidan blasts made a spectacular display on April 7, 1945, they proved completely ineffective against the attacking US aircraft.