The 'Tonkin Gulf Yacht Club' was the tongue-in-cheek nickname of the US Seventh Fleet that was stationed off the coast of Vietnam and tells the full story of the US Naval air campaign in the Vietnam War from 1965 to 1975. On the blog today, author Thomas McKelvey Cleaver discusses the most memorable operation he took part in and whether we should be learning more about The Vietnam War in school. 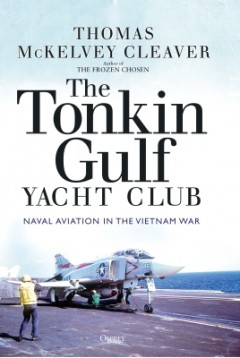 Was the Gulf of Tonkin Incident a false pretext for the US escalation of the Vietnam War?

It is a “false pretext” in that the Tonkin Gulf Resolution the Congress passed as a result, which was used as a “de facto declaration of war” by the Administration, was the result of inaccurate reporting, which the commander on the scene later tried to change. So far as I have been able to determine, no one sent the destroyer on its mission in order to get that result, but when it happened there were many in the upper reaches of government who were more than happy to take advantage of the situation to advance their own agenda.

Did your personal experience make the research process easier?

I knew what to look for, the questions to ask Google, which resulted in finding the reports I hoped existed, which did exist. What is disturbing is to read all these now-declassified reports and realize they knew every mistake being made when they were being made, but couldn’t see them and change.

When did you first know that you wanted to tell this story?

I wanted to write something about Vietnam for a long time, but I didn’t want to plow a well-plowed field and I wanted to be sure that any blame awarded was presented to the right party. As I say in the author’s foreword, “Vietnam changed my life.” The most important thing that happened that made me certain I’d be putting out a tale not told before was when I got put in touch with the “other side” and Dr. Nguyen Sy Hung, the VPAF historian, put me in touch with pilots so I could tell their stories. With that and their official history – which US pilots who have read it say is more accurate than anything our government has done – I was able to put named people from both sides “in the same air space.”

What was one thing you wanted to talk about in the book, but didn’t have room for?

I could have gone into a lot more detail about US government decision-making, which interests me and probably other historians, but I am pretty sure would have put most of the readers to sleep. It’s important stuff, but that kind of granular detail doesn’t add to “readability,” and it really wouldn’t change the points being made.

What was the most memorable operation you took part in and why?

The Tonkin Gulf Incident. Discovering the truth of what had happened a month later, out of the mouth of a trusted friend, literally changed my life and my view of the world forever. The most memorable operation I discovered was the North Vietnamese air attacks on US Navy ships in 1972, which the US Navy claims never happened – to the point where in recent years the Naval History and Heritage Command has scraped all the ship’s histories to get rid of any mention. And they’ll claim – as they did to me – that those events never happened. They even maintained that position when I referred them to the Wikipedia page for the USS Higbee, which includes the information on the attack, and is a direct lift from the Dictionary of American Fighting Ships, as published by them before everything was flushed down the memory hole.

The Vietnam War isn’t often taught in schools. Do you think it’s an important war children should be learning about?

Yes, they should be learning, but unfortunately what they’d probably be learning – what would get past the school book publication committees – would be worse than useless, since it would most likely be the “official history.” If you want to know what that is, the US government put up a website in 2015 to mark the 50th anniversary of the war, and if you go there and look up the Tonkin Gulf Incident, you will get the “official story” told to Congress back in 1964, which anyone who can read has known was pure baloney ever since the Pentagon Papers were published 50 years ago. There’s nothing I found in that site that contradicts the “official story” on any particular topic one might look at. It’s like reading the official Japanese history of the Pacific War, which bears no relationship to reality whatsoever, or what passed for “history” in the Soviet Union. For students to be given that sort of baloney is worse than getting nothing –  if they get nothing they won’t have anything to unlearn if they ever do any study themselves.

Order your copy of The Tonkin Gulf Yacht Club here