Richard Macrory is the author of Campaign 298: The First Afghan War 1839-42  In the light of the current events in Afghanistan and the recent withdrawal of US and NATO forces in mind, in this updated blog he talks about his personal connection to the campaign, his research for the book and the links between this 19th century conflict and the present day.

I wrote these words five years ago on publication of my study of the First Afghan War with the 2003 invasion of Iraq and the subsequent 2016 Chilcot inquiry into what had gone wrong very much in mind.  I would not have predicted that in the summer of 2021 I would be watching with grim fascination the rapid victory of the Taliban forces, and the ignominious withdrawal of US and NATO troops from the country.  The modern resonances of the First Afghan War 1839-1842 have become even more striking.  The names of Afghan cities such as Herat, Ghazni and Jalalabad which featured heavily in the First Afghan War are now familiar to a contemporary audience. Even the Taliban are reported to have posted a picture of the last US soldier leaving Kabul together with Lady Butler’s iconic painting The Remnants of an Army (pictured above) showing one of the few survivors of the British retreat, Dr Brydon, reaching Jalalabad.  A pointed juxtaposition underlining the fact that they are fully aware of the historical failures of foreign intervention in Afghanistan. 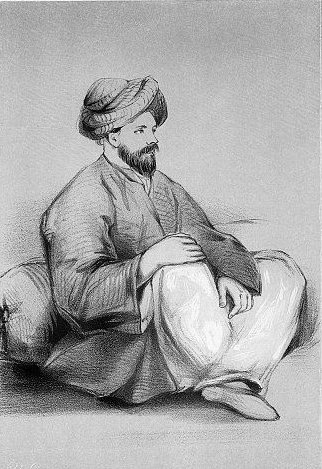 When I was a teenager, my father, Patrick Macrory, wrote Signal Catastrophe (1966), the first modern account of the Afghan War, drawing on contemporary sources including Kaye’s magisterial History of the Afghan War published less than a decade after the event. There have been other studies of the First Afghan War published since then, notably William Dalrymple’s Return of the King (2013).

Three years later, the core British forces were forced to retreat from Kabul. Leading to the death of some 4500 soldiers and 12000 camp followers, this was the first time that British forces had been so defeated by non-professional local resistance. The following year an Army of Retribution was sent to restore British pride. Its commander, General Sir George Pollock, was intent on avoiding earlier military mistakes – his meticulous logistical and military planning crushed Afghan resistance. But by then the British had lost all interest in further involvement in Afghanistan and left the country to the original ruler they had ousted four years earlier.

Artists attached to the British forces produced an extensive collection of evocative lithographs and drawings, many of which are reproduced in the book. The research also uncovered material hitherto hardly seen. I met a London art collector who had the original map used by the officer who had rescued the British prisoners. A visit to a regimental museum in Somerset unearthed in its basement a portrait of the young British officer stationed in Jalalabad who had first spotted the sole British survivor of the march from Kabul (Seen in the painting Remnants of an Army, featured above.) Searching through the Kew archives uncovered a detailed map of the disposition of the forces during the siege of Ghazni produced for the commander in chief. This formed the basis for the battlefield Birds Eye View. Ghazni was considered impregnable, but the Chief Engineer attached to the forces devised a plan for secretly blowing a gate by gunpowder. One of his relatives made contact and allowed me to reproduce a family portrait of Chief Engineer Thomson. More recently I met one of the direct descendants of Lady Sale, a General’s wife who wrote a pithy contemporary diary of the whole disaster, and was later feted in London as the “Grenadier in Petticoats”. 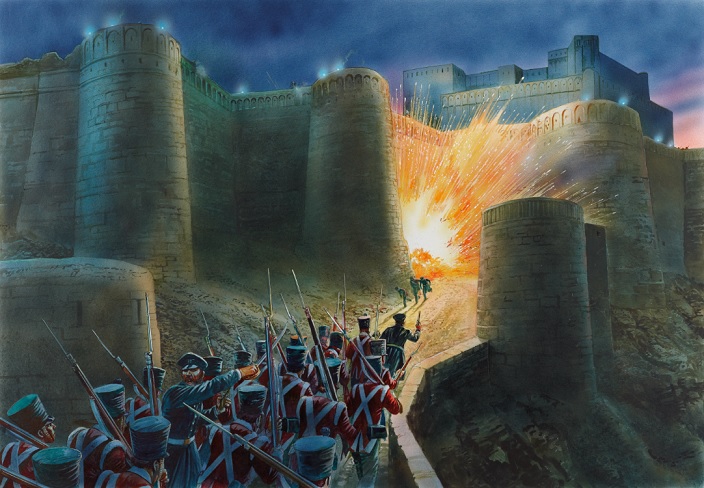 Kabul and the other key towns and cities in Afghanistan have grown out of all recognition since the 1840s, but the surrounding landscape and the route the British took during their retreat have hardly changed. In the early 1960s the American anthropologist Louis Dupree walked the retreat on the exact days that the British had done so many years before. He was exploring the extent to which village oral historians still recalled the First Afghan war, and found they were indeed familiar with the British names involved. His widow, Nancy Dupree, carried on living and working in Kabul and we made contact. She discovered hidden in a trunk the slides he had taken at the time, and a number are reproduced in the book. Sadly she died in 2017.  One of the most famous paintings of the First Afghan War is Wollen’s Last Stand of the 44th at Gandamak, now to be seen in the Chelmsford and Essex Museum. Gandamak has been far too dangerous to visit at present by any but the most intrepid but I contacted an American serviceman who managed to visit the village a few years back. His photograph of the lonely rocks where the last remnants of the British army were slaughtered appears in the book.

One would hope that modern politicians can learn from history. Yet the story of the First Afghan War continues to echo all too clearly. The first edition of my father’s 1966 book contained a foreword by Field Marshall Sir Gerald Templer who had commanded the effective campaign against communist insurgents in Malaya in the 1950s. His words contained a veiled reference to US involvement in Vietnam - rather too sensitive for a US audience at the time, and his foreword was cut out of the American edition. General Sir Michael Rose wrote the foreword to a new edition of the book published in 2002 shortly after the commencement of Operation Enduring Freedom. He warned that “the underlying risk to the mission was much the same as experienced by all foreign powers that have sought to impose their will on Afghanistan over the centuries.”

William Dalrymple found that Hamid Karzai, the new Afghan President supported by the US-led coalition, astonishingly came from the same sub-tribe as Shah Soojah, the luckless king whom the British had tried to impose on Afghanistan during the first Afghan War.   During the First Afghan War the British soldiers complained that their Brown Bess musket, fine for conventional battles, was outgunned by the far more accurate and longer range jezail used by the Afghans.  In 2010 British forces found that their standard issue SA80 assault rifle similarly could not match the range of the Taliban Kalashnikovs, and 400 new long-range Sharpshooter rifles had to be ordered.

It would be a mistake to exaggerate contemporary resonances.  In 1839 the British never contemplated an exercise in nation building in Afghanistan – simply to reinstate an Afghan king who they considered would favour British strategic interests in the region and, wrongly as it turned out, would command wide support from the Afghan population.  And Afghanistan then posed no direct physical threat to British citizens equivalent to that of Al-Quaeda whose leadership was protected in Afghanistan by the Taliban government from 1996.

But the underlying challenges of Western incursions into countries such as Afghanistan and Iraq cannot be ignored.  One of the most compelling accounts of the recent intervention is Farewell Kabul published by Christina Lamb in 2015. Often in acute danger, she spent nine years in Afghanistan observing at first hand Operation Freedom and its aftermath.  Depressing at times, her conclusions echo what many thought at the time following the failure of British strategy in the First Afghan War: “.. a lack of imagination caused us to assume people wanted the same as us, and that because our enemy were uneducated they were ignorant savages we could easily outsmart. It was a strategy that ignored tribal realities and other people’s national interests including those of our key partners.”

In his statement to the Chilcot inquiry concerning the Iraq invasion, Tony Blair said, “..with hindsight, we now see that the military campaign to defeat Saddam was relatively easy; it was the aftermath that was hard.”  Chilcot commented pithily: “The conclusions reached by Mr Blair after the invasion did not require the benefit of hindsight.”   In 1839, following Britain’s successful invasion of Afghanistan, a local Afghan chieftain reportedly said to Alexander Burnes, one of the senior political officers, “You have brought an army into the country. But how do you propose to take it out again?”.

Henry Kissinger once wrote, “It is not often that nations learn from the past, even rarer that they draw the correct conclusions from it.”  Unfortunately his words still seem all too true.