CAM 358: The Balkans 1940–41 (1) the first of two volumes examining the Axis campaigns in the Balkans, book offers a detailed overview of the Italian and Greek armies, their fighting power, and the terrain in which they fought. On the blog today, author Pier Paolo Battistelli shares how this title came about. 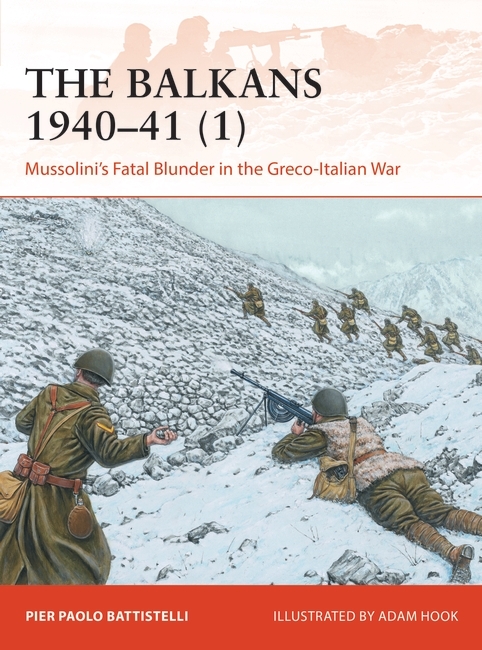 My own personal knowledge of the Italian – Greek war in 1940-41 owes much to my dear friend Minas Laggaris, a Greek historian from Salonika. Thanks to him not only did I start researching the subject in depth (which allowed me to work on the first Balkans title for Osprey) but he was also instrumental in making the book possible.

When you start writing a Campaign title, the first thing you need to do is get hold of any source material, in particular any official history that is available. The Italian official history, which I was in possession of at the time was not very reliable: lacking in detail with little coverage from the Greek perspective. I needed more reliable Greek sources to counterbalance it and, thanks to my friend, Minas, I eventually obtained the Greek official histories of the war to use to construct the complete historical picture. Working with a good Greek dictionary, I studied the maps which were extremely clear and detailed, showing the situation on the ground and the units’ movements with more clarity than the previous maps I had had in my possession.

I then had to reconstruct how the Italian and Greek order of battle evolved. The availability of key Italian documents (made possible by my friendship with the former chief of the Italian Army Historical Branch, retired Colonel Filippo Cappellano) allowed me to cover one side of the story; but the other side didn’t prove so easy. Nevertheless, after much effort and thanks to the Greek language official histories, I did finally manage to reconstruct the Greek army order of battle.

Now that I had all the necessary details about the opposing forces and their actual deployment on the ground, just one crucial detail remained: the photos!

Getting hold of photos from historical archives in the digital age can be a relatively easy task, but sometimes complications arise: photos may still need to be catalogued, don’t have captions or other details, and bureaucratic procedures can be quite complex.

I decided to use photos from an online library for the Italian material, then, very fortunately a friend and fellow Osprey author, Phoebus Athanassiou, came to my aid with the Greek side of things, obtaining the photos I needed from Greece and leaving me with one final task – to write the actual book!

The Italian – Greek war of 1940-41 is not an easy war to write about. Apart from a few key strategic tactics, primarily on the Greek side, the campaign broke down into a series of minor engagements, mostly fought on unknown mountain peaks which are often difficult to locate on a map. It is nevertheless an interesting campaign which highlighted the shortcomings of the Italian army at the time and the capabilities and tenacity of the Greek one (the Greek Prime Minister’s refusal of an Italian ultimatum with the famous ‘Oxi’ (‘No’ in Greek) is still a matter of national pride in Greece today).

An interesting issue, which I discovered early on in my research was the Greek strategy during the counterattack in early December 1940 when Greek CiC, General Papagos, made no attempt to strike at the line between the Italian 9th and 11th armies because the line ran along the Vjosë River valley which he felt was better suited to Italian tanks rather than foot-based Greek infantry who lacked anti-tank weapons.

This strategy seemed wrong to me for two reasons: firstly, the river valley wasn’t suitable terrain even for the Italian tanks (which were mostly the light L-3 tankettes) and secondly, the Greek Army already had its own anti-tank guns converted from 75mm gun pieces which had proved very effective during the October 1940 Italian attack.

Whatever the reason for this strategy, the consequence was that the Greek Army kept advancing along a broad line without attempting to encircle and destroy the Italian units, and, as a result, by the end of the campaign the Italians were able to exceed the Greek Army in strength and secure – if not victory – at least their own survival. It is a key strategic point of the war that will no doubt continue to be debated in the future.

Book are often the sum of their contributors and I would like to thank again not only my friends and colleagues Minas Laggaris, Filippo Cappellano and Phoebus Athanassiou for their help in providing the source material for the book, but also the illustrator, Adam Hook and series editor, Nikolai Bogdanovic for bringing its content to life.

I hope you will enjoy reading the first title of the Balkans Campaign series: The Balkans 1940–41 (1): Mussolini's Fatal Blunder in the Greco-Italian War with its analysis and depiction of this relatively unknown war.