The Campaign title, Stalingrad 1942–43 (2), is the second in a three-part series examining the Stalingrad campaign, one of the most decisive military operations in World War II, that set the stage for the ultimate defeat of the Third Reich. On the blog today, author Robert Forczyk gives a brief overview of this upcoming title. 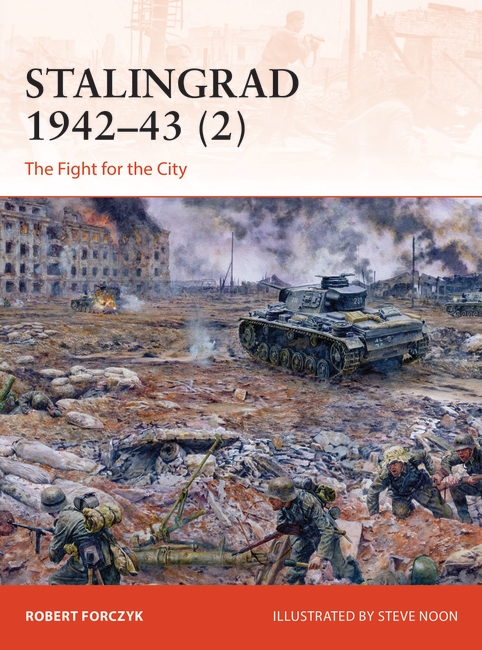 Stalingrad is one of those famous battles such as Agincourt, Waterloo and Gettysburg, that is dominated more by iconography and lingering wartime propaganda, rather than historical fact and sober military analysis. In the second volume of my Stalingrad trilogy, which focuses on the fight in the city from 3 September to 18 November 1942, I try to place the emphasis on how the battle was actually fought rather than how it has often been portrayed. Even today, the memory of the Battle of Stalingrad has great cachet for a Russian regime which seeks to sustain wartime patriotism as a means to inculcate loyalty among its current citizenry. From the Russian perspective, the Battle of Stalingrad validates the notion that the Soviet Union was primarily responsible for defeating the Third Reich and that the military contributions of the Western Allies pale in comparison to the sacrifices made by Soviet citizens on the banks of the Volga in 1942–43. This version of the story is simply that Russian defiance broke one of the mightiest war machines on the planet at Stalingrad and this ultimately determined the struggle against fascism. Furthermore, Stalingrad (now Volgograd) is one of the few Eastern Front battlefields that sees a significant number of foreign tourists and the Russian regime regards the larger-than-life monuments in the city as a valuable platform to espouse their version of the battle to the world.

Objectively, the Germans started their attack into Stalingrad in early September 1942 with forces that were already exhausted from nine weeks of hard fighting and at the end of a long, tenuous supply line. Although many histories like to depict the German 6.Armee as a strong formation entrusted with leading the main effort in the 1942 summer campaign, in fact at no point in the campaign did General Friedrich Paulus’ army have priority for replacements, and it never received any significant reinforcements after it crossed the river Don. When Paulus needed to replace his infantry losses, he was told to cannibalize his support units and even surplus panzer crews. Indeed, Heeresgruppe B, the 6.Armee’s parent formation, had no significant operational reserves throughout the campaign – which tends to deflate the idea that Stalingrad represented the main German effort at the time. Incredibly, during the height of the Stalingrad fighting, it was Heeresgruppe Nord that had priority for replacements, not Paulus’ 6.Armee. When the first Tiger tanks became available in August 1942, where did Hitler send them? Leningrad, not Stalingrad. Throughout the fighting in Stalingrad, Paulus had to make do with substantially less food, fuel and ammunition than German commanders habitually had received for major offensives. As a result, 6.Armee was only capable of mounting short offensive pulses of a few days, before it ran low on ammunition – which prevented front-line units from achieving decisive successes. On several occasions in September–October, 6.Armee came within an ace of victory at Stalingrad, but their offensive pulses culminated just short of their intended objectives. On top of these material deficiencies, the Wehrmacht had no doctrine for urban combat and 6.Armee was forced by necessity to create one in situ, leading to a ‘trial and error’ approach. Thus, from the German perspective, the Battle of Stalingrad was something of a ‘rock soup’ offensive, rather than an all-out attempt to win the war in the East.

Soviet commanders on the ground in Stalingrad in early September 1942 expected the city to fall, since the best Red Army units had already been destroyed in the previous fighting along the Don, leaving the city defended mostly by worker’s militia, anti-aircraft troops and NKVD personnel. Both Stalin and the Stavka in Moscow were desperate and continuously ordered ill-considered counter-attacks that squandered reinforcements without achieving much. By the time that Chuikov took over the 62nd Army, the Germans had already penetrated the city’s outer defensive lines and were in the suburbs. Chuikov inherited an army comprised of burnt-out units, barely capable of holding a defensive line. Nevertheless, he adopted a ruthless mindset from the outset and demanded a steady stream of reinforcements from the front commander, Eremenko. Although cunning, Chuikov did not conduct an imaginative defence in Stalingrad, but simply fought a battle of attrition which proved costly to both sides. The Germans managed to inflict a 4:1 casualty ratio at Stalingrad, but Soviet reinforcements kept on coming and the well was dry on the Axis side. Nevertheless, the Stalingrad Tractor Factory (STZ) was lost in October due to one of Chuikov’s poorly planned counter-attacks, which decimated his own front-line units in a key sector. Yet time and again, Chuikov was saved by fresh reinforcements from across the Volga, which arrived just in time to prevent the Germans from occupying important positions. The arrival of Rodimtsev’s 13th Guards Rifle Division (depicted in the volume in the battlescene artwork on pp. 40–41)) on 15 September was one of the crucial moments of the battle, but Chuikov then left this veteran unit in a quiet sector for much of October and November.

In the city fighting, German commanders discovered that their firepower – which heretofore had been adequate in battles fought on the open steppes – proved inadequate to defeat Soviet infantry hunkered down in steel-reinforced concrete structures. Stalingrad, built as a modern industrial city, was a natural fortress. A simple structure like the Grain Elevator absorbed multiple direct hits from German 8.8cm Flak guns and 10.5cm howitzers, with little effect upon the defence. Although the Luftwaffe achieved air superiority over the city, it possessed very few heavy bombs capable of penetrating concrete buildings like in the Krasny Oktyabr (Red October) Steel Plant complex. Instead, the Luftwaffe’s general purpose 250kg and 500kg bombs simply created more rubble, thereby aiding the defence. The most effective weapons 6.Armee possessed were its assault guns, used to spearhead attacks on fortified buildings, but they consumed ammunition at a prodigious rate and without armour support, the German infantry was reluctant to advance in urban terrain. From the German perspective, the tactical fighting in Stalingrad was very frustrating but it did lead to the development of a number of weapons systems optimized for urban combat, such as the Sturmpanzer IV (Brummbär)and the Sturmtiger. In contrast, the Red Army did not develop any new weapons or urban warfare tactics based on its experience at Stalingrad.

Soviet narratives on Stalingrad tend to gloss over or ignore the multiple counter-offensives at Kotluban, north of the city, which attempted to break through 6.Armee’s Nordriegel Stellung. All of these counter-offensives in September–October were costly Soviet tactical failures, even though these defeats were the catalyst that led to Eremenko suggesting ‘a new approach’ – which would become the successful ‘Uranus’ counter-offensive in November. Likewise, the heroic defence of the Orlovka salient, which seriously delayed German efforts to complete the occupation of the northern part of the city, are today given short shrift because the defenders eventually evacuated their positions rather than fight to the last man. Reading the Soviet versions of the Battle of Stalingrad, it can be difficult to discern that key positions such as the Mamaev Kurgan, the Krasny Oktyabr Steel Plant and the Grain Elevator, were actually occupied by the enemy. Instead, the Main Political Directorate (GlavPUR) took over the Stalingrad narrative while the battle was still in progress and began to create legends around positions that had not been yielded, such as ‘‘Pavlov’s House’’ and the Gerhardt Mill. In fact, ‘Pavov’s House’ was in a relatively quiet sector and there is no evidence that it was ever seriously attacked by the Germans. The GlavPUR was also the source of the sniper cult, surrounding simple soldiers like Vasily Zaitsev. There is no doubt that Zaitsev was a skilled sniper, but he was turned into a ‘legendary’ shot after just a few days in action, again in a relatively quiet sector. Had Zaitsev been at the Tractor Factory or the Steel Plant, he would likely have been dead or captured after a week in action. Meanwhile, the men who really made a difference at Stalingrad – like Andrusenko, Cheryakov and Polyakov – are virtually ignored in modern Russian accounts because they all committed a irredeemable sin; they chose loyalty to their comrades and withdrew from hopeless positions instead of sacrificing themselves like good ‘little cogs’ (Stalin’s post-war phrase for the little people who made victory possible). Even capable front-line commanders like Rodimtsev had lacklustre careers after the war, in contrast to ‘political’ generals who knew how work the system.

Until the Battle of Stalingrad, protracted urban battles between major armies were virtually unknown (with the exception of Shanghai 1937). Traditionally, armies put large cities under siege and let starvation and disease reduce the defences, but this was not possible at Stalingrad. Ultimately, the Soviets won at Stalingrad because Stalin and the Stavka decided to feed a steady stream of Red Army units into the urban battle until the Germans were fought to a standstill. Hitler had never intended that the Third Reich would fight its decisive battle at a place like Stalingrad, but decided to let his original bet ride on the increasingly vain hope that 6.Armee would somehow pull off a miracle. Both sides made tremendous, costly mistakes at Stalingrad, and in war, it is often the side which makes the fewest mistakes that prevails in the end.