Something big is coming July 22nd. From the mysterious mind of author, R.E Davis comes Sigil & Shadow, a roleplaying game of urban fantasy and occult horror in which players take on the roles of illuminated heroes and shadowed monsters. Ancient nightmares lurk behind the closed doors of board rooms, entities from beyond time prowl the city streets, forgotten rituals are reborn as viral memes. Do you take a stand against the encroaching shadows? Or do you seek their power for yourself? Preorder your copy now and terrify your players this summer.

At last, the time has come. You’ve sat read my hype posts, my rambles on game mechanics, and now comes the time where we dive into the weird workings of the cosmos. Today’s post is a primer and overview about the second part of Sigil & Shadow – Esoterica. We’ll be touching on the broad stroke cosmology and have a quick look into the gifts of Mysticism, the manifestations of the Shadowed, and the various arcana of Magic.

The cosmology of Sigil & Shadow is a broad stroke canvas of concepts, open for interpretation or inclusion of just about any myth, folklore, belief system, or practice. The player characters inhabit a “dark parallel” of our own modern world, existing in a physical state of being known as the Extant. For most, the physical world in front of their eyes is all they’ll ever know. But others know how to pull back the Curtain, the veil that shields them from the tide of shadows battering against the vessel of reality. Gazing out beyond the pale, one sees a space called the Echo –a realm of memories, emotions, and nightmares, taking a form like you’d see reflected on the surface of a stagnant pond. This is the home of spirits, ghosts, and thoughtforms. Beyond this space is the wider Nether, the womb of shadow, chaos, and void from which the world had been born. Aberrant entities and alien intelligences lurk in these depths, with some reaching out across time and space to infect creation.

Mysticism in Sigil & Shadow is a practice of tapping into an innate metaphysical capability from within. Mystics may portray it as a psychic phenomenon, tapping into an uncanny talent of the mind, or as a deeply spiritual practice, attuning to a higher state of being.  Regardless of how it’s perceived, all player characters have the capacity to pick up and “sense” the presence of the paranormal, that tingling sensation on the back of your neck. However, as one trains into the Mysticism skill, they begin to unlock Gifts – the first being Sixth Sense, allowing them to read auras, see spirits or ascertain the supernatural. As they advance in skill level, mystics may pick up additional talents – clairvoyance, telepathy, the ability to heal others through sheer will, or even the ability to project their senses into the Echo. 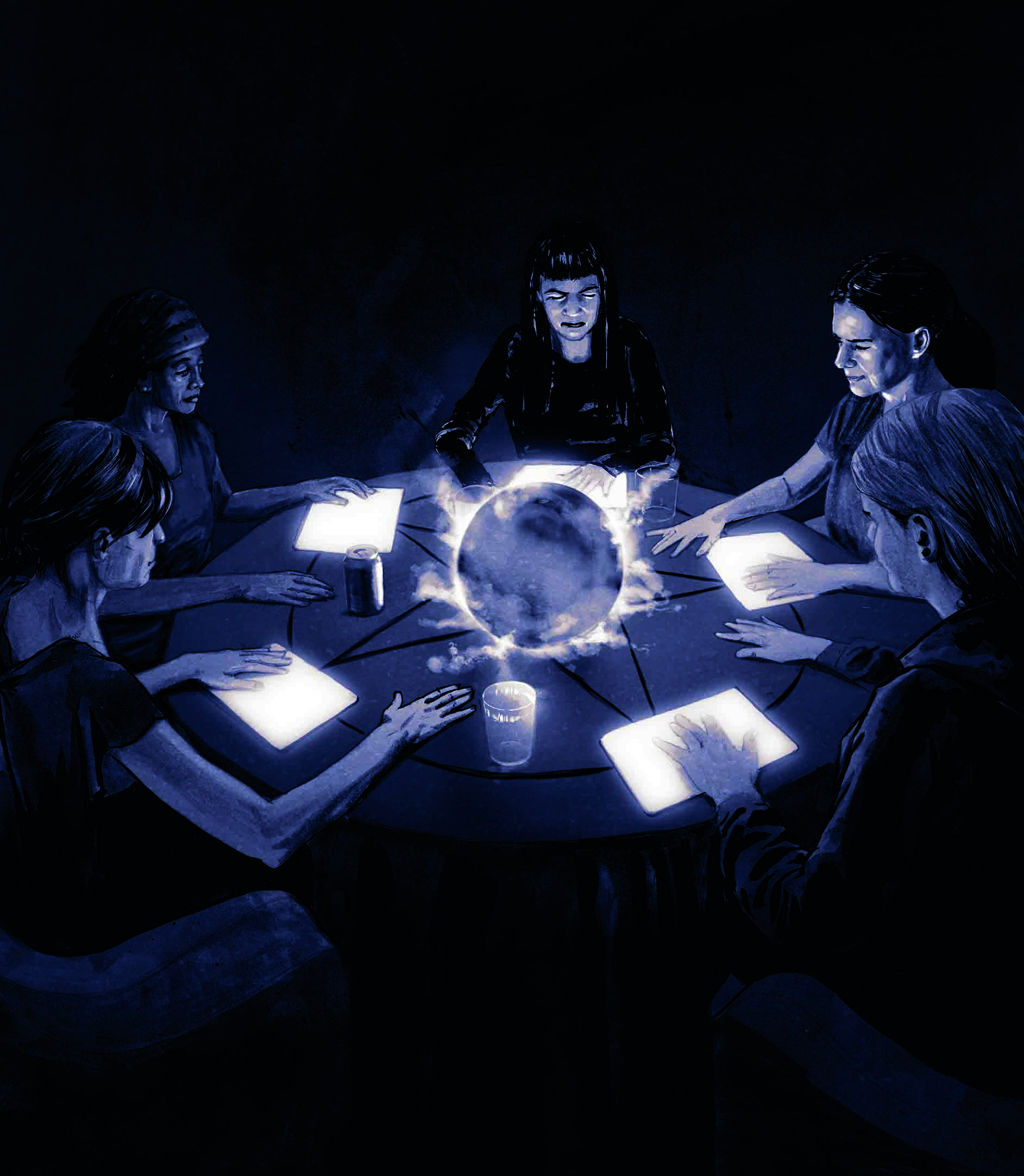 Shadowed characters have allowed themselves to be changed by the umbral forces bleeding into the Extant, and for doing so have developed powers called manifestations.  Rated and advanced like skills, these powers range from physical enhancements, paranormal attacks, to even more fantastic abilities: phasing into the Echo momentarily, teleportation, shapeshifting, wall crawling, or even flight. Each manifestation has two features – a passive ability that is always accessible, and then a special bonus enhancement that is activated by spending a Bone.

An example: Regeneration lets a character recover 2 HP (for every level invested in it) every minute. If the character spends a Bone, however, they 1d10 (per level!) of HP replenished immediately as an action.

However, if manifestations are the blessing for embracing their darkness, Burdens are the price a character pays in exchange. These are hindering characteristics that complicate things for the shade – they may have a Bane (like being allergic to silver or burn in the sunlight), or a Dreadful Feature that occurs when they use their powers (like growing horns out of their forehead or eyes glowing with hellfire). Perhaps they’re haunted? Or bound to an item or location? Cast no reflection?

The beautiful thing about both Manifestations and Burdens is that their application and how they work in the narrative is up to the player. You can recreate the archetypes and tropes of classic monstrous characters or develop your own weird unique vision on them!

The Invocation of Magic

Magic in Sigil & Shadow is the art of tapping into, and manipulating, the metaphysical laws of the Extant itself. It is a “freeform” system – as in, there are no hard-set catalogues of spells to memorize or master. Instead, performing magic works as an act of will – spellcasting entails declaring intent and desire, followed by the occultist’s Player and the Guide discussing and arbitrating how it’ll play out in the game.

Anyone, Illuminated or Shadowed, may invoke a spell – an invocation is an extended task, as the character performs a ritual to build up the magic before firing it off. Exactly how powerful a spell can be is dependent on training – an occultist with basic experience may attempt simple folk spells and incantations, which have effects small enough that most would put it down to coincidence or plain luck. Once an occultist begins to focus and train into a specific Arcanum, however,they begin to unlock more incredible tricks – turning a lit candle into a flame thrower, summoning spirits and binding them to their mobile device, whispering a message on the wind that a friend across town can hear, etc. With discipline and devotion to the art, they can potentially reach fantastic levels, allowing them to conjure storms or open portals into the Nether.

Invoking magic requires a few things – time, energy, and concentration, as well as a catalyst. The catalyst of a spell is a material offering that is tied to the arcanum powering the spell. There is several arcana to practice – starting with the six “fundamentals” of Aero, Aqua, Geo, and Pyro (along with Vita and Umbra). Then there are the apocrypha – modern day “pop arcana” that are practiced on the outskirts of traditional magics. These include the audible glamor of Musicorum, the flesh-crafting Caro Artis, the mind-expanding alchemy of Pharmakeia, and the literal divination of the surveillance age in Techno magic. None of these fit your vision? Simple guidelines for creating your own arcanum are provided!

As I mentioned in the Pushing the Odds devlog, casting during combat is rarely a solid idea. Luckily, there are several forms of spell delivery – in addition to just firing them off immediately, an occultist can bind magical effects to items or people. Alternately, they may charge the spell to a sigil, giving it a specific trigger in order to be fired off at a later time. This means magic can be prepared well in advanced, with rules for “batch casting” as well as creating permanent magical items (usually at the cost of the caster’s own strength).

Of course, there is an alternate and more immediate path to power – Shadowed characters may opt to become sorcerers, allowing them to channel spells (that is, to cast immediately without the ritual). This comes at a price though. Not only is channeling a manifestation they must train and grow with, but the consequences for failure are higher and unpredictable. Not only by corrupting the fabric of reality, but also tarnishing themselves with the Sorcerer’s Stain, a “butterfly effect” where not only does your magic indirectly cause grief for others in your area, but these total strangers just know you’re the one responsible for it.

And for now, we draw the Curtain to a close. Next time, however, we talk about Setting the Stage – a look at the worldbuilding tools and advice we provide to the Guide and their Players to create the themes and feel for their campaign setting.