Today on the blog, Commissioning Editor, Martin Windrow continues our Osprey Team's Top Picks for Christmas with three of his favourite titles on WWII. 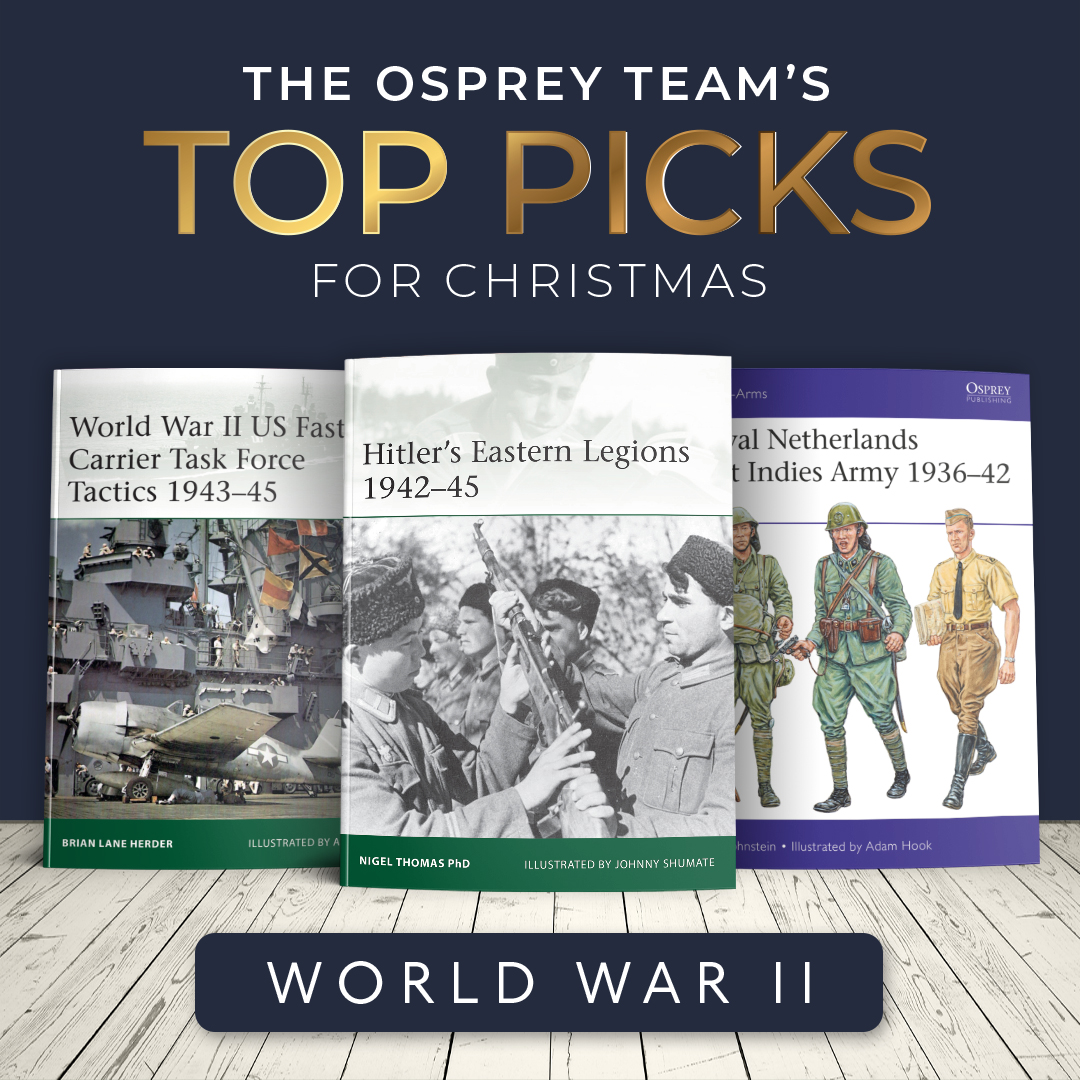 When we first began publishing Men-at-Arms more than 40 years ago, the market was driven by the ever-growing hobbies of military model-making and war-gaming, and the dominant period of interest was the Napoleonic Wars. As the decades have passed, and for various reasons, World War II has overtaken that as the leading subject of public interest. In recent years I believe we have greatly improved the depth of detail, and breadth of research, of our World War II titles in several series, and so for this post I have chosen three titles from that period.

I choose this title partly because it's an example of a subject I have wanted to cover for years, but only in 2017 did I find a suitably qualified author. Marc Lohnstein is a curator at the Museum Bronbeek in the Netherlands; once a home for retired colonial soldiers, this is today the repository of exhibits and archives relating to the former Dutch colonies in today's Indonesia.

In January-March 1942 the mixed-race Dutch colonial forces - the KNIL (Army) and ML-KNIL (Army Air Force) - formed an important part of the Allied joint ABDACOM (American-British-Dutch-Australian regional command). Alongside British and Australian troops, sailors and airmen, they put up a brief but locally fierce resistance to the Japanese invasions of Borneo, Sulawesi, Ambon, Timor, Sumatra and Java. This gap in Osprey's coverage of World War II had always irked me, and being able at last to fill it with a detailed, illustrated account by a Dutch specialist historian is extremely satisfying.

This study by Brian Lane Herder seems to me a masterpiece of concision, packed with details not only of the composition and organization of these war-winning naval formations, and of what they accomplished, but of HOW they did it.

After explaining the evolution of doctrine and strategy, he describes what aircraft, weapons and men the carriers embarked; exactly how different categories of aircraft launched and carried out various types of mission; how these were controlled, and how they were supported. He ties together the 'micro' (the pilots, gunners and flight-deck crews) with the 'macro' (the massive logistic effort that kept the Task Forces of the US Third and Fifth Fleets at sea and operational for many months, across the vast expanse of the Pacific). After reading it, few could deny Holder's summary that this campaign was 'the product of industrial-era, mass-production America at its technological and organizational zenith'. Damn, but they were good!

This is a 'core' type of Osprey series book, and I believe it is a masterly example of how they should be done.

Dr Nigel Thomas is both a linguist, and a specialist in researching foreign wartime archives. This enables him to present in unprecedented detail the story of the units raised by the Wehrmacht on the Eastern Front from ethnic-minority volunteers in Turkestan, the Caucasus, the River Volga basin, and Crimea. The existence of the Turkestan, Azerbaijan, Georgian, Armenian, North Caucasus, and Volga Tatar Legions has long been known, but this is the most thorough account yet published of their organization, record, and insignia.

The text is supported by detailed orders-of-battle tracing unit evolution, by coloured insignia charts as well as Johnny Shumate's eight splendid plates of uniformed figures, and by rare photographs, many from private collections. The book also covers a number of Intelligence, SS and security units previously unreported in English-language sources. It is the sort of reference book that I am proud to have helped get into the public domain.