Today on the blog, Commissioning Editor, Kate Moore continues our Osprey Team's Top Picks for Christmas with three of her favourite titles on WWI. 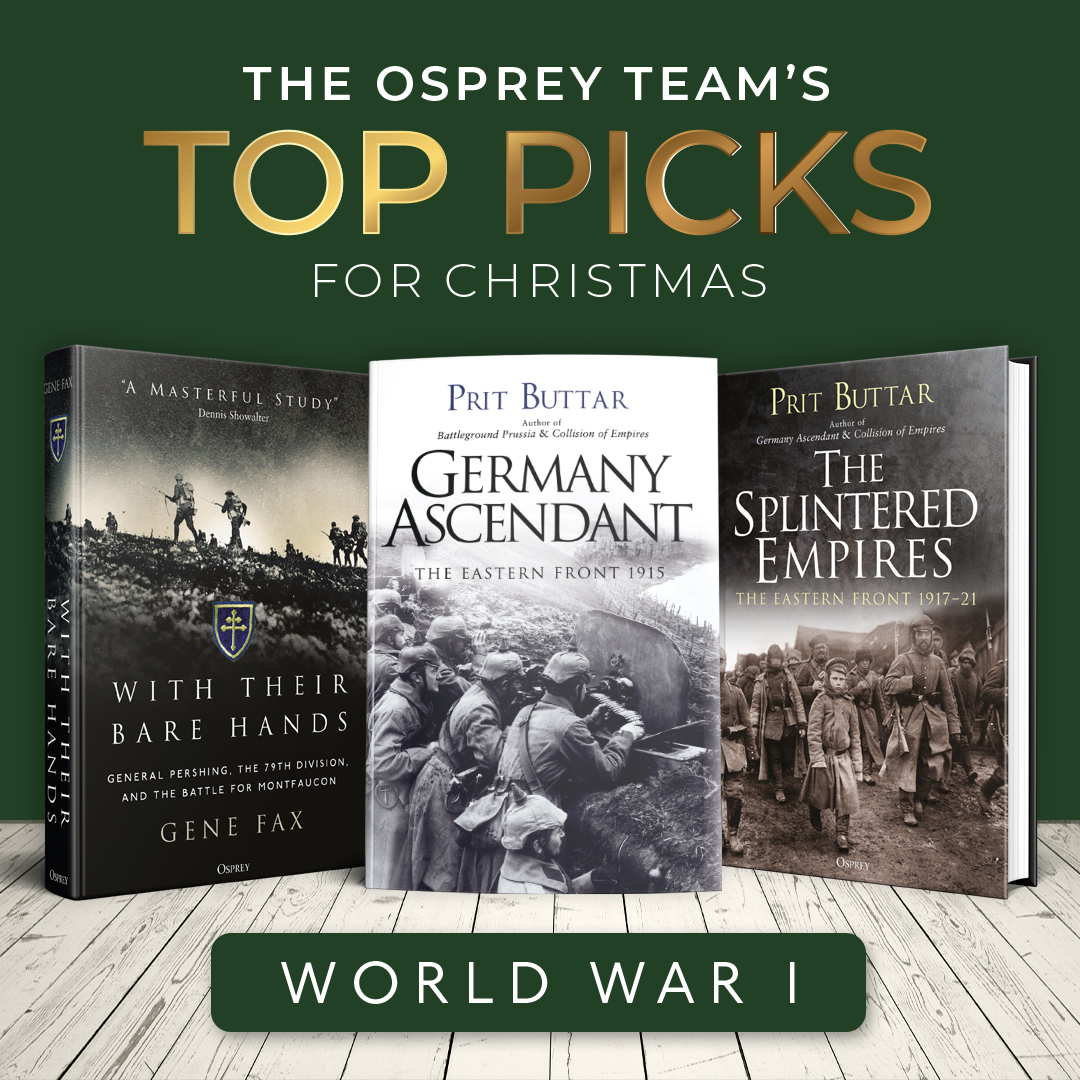 Not far from the Oxford office and walking distance from my house there is a Commonwealth War Graves cemetery. 156 servicemen from the First World War are buried here. It is a beautiful and poignant place. But there isn’t a single town or village the length and breadth of the country that does not have a war memorial. They are physical reminders of the terrible toll of that conflict.

Less well known or read about is the impact of the war on the Eastern Front. This is why I have selected two books from Prit Buttar’s masterful quartet on the First World War in the east and the conflicts and tragedies that rumbled on in its wake. Similarly, the American involvement in World War I is not always given due attention. Gene Fax’s history about the 79th Division and their nightmarish battle for Montfaucon is an utterly engrossing read. It was honour to work on all three books and learn so much more about the First World War.

With Their Bare Hands

Based on meticulous research, this history of the poorly trained 79th Division in the Meuse-Argonne offensive reveals how inexperience, poor communications and inadequate support compelled that division's courageous soldiers to fight “with their bare hands” on the most heavily fortified part of the German line. But it is not just a history of one battle. Using the 79th as a window onto the American Army as a whole, Gene Fax examines its mistakes and triumphs, the tactics of its commander General John J. Pershing, and how the lessons it learned during the Great War helped it to fight better during World War II.

The massive offensives on the Eastern Front during 1915 are too often overshadowed by the events in Western Europe, but the scale and ferocity of the clashes between Imperial Germany, Habsburg Austria-Hungary and Tsarist Russia were greater than anything seen on the Western Front and ultimately as important to the final outcome of the war. From the bitter fighting in the Carpathian Mountains, to the sweeping advances through Serbia and the almost medieval battle for the fortress of Przemysl, this is a staggeringly ambitious history of some of the most important moments of the First World War.

At the beginning of 1917, the three empires fighting on the Eastern Front were reaching their breaking points, but none was closer than Russia. After the February Revolution, Russia's ability to wage war faltered and her last desperate gamble, the Kerensky Offensive, saw the final collapse of her army. This helped trigger the Bolshevik Revolution and a crippling peace, but the Central Powers had no opportunity to exploit their gains and, a year later, both the German and Austro-Hungarian empires surrendered and disintegrated.

Prit Buttar comprehensively details not only these climactic events, but also the ‘successor wars’ that raged long after the armistice of 1918. New states rose from the ashes of empire, and war raged as German forces sought to keep them under the aegis of the Fatherland. These unresolved tensions between the former Great Powers and the new states would ultimately lead to the rise of Hitler and a new, terrible world war only two decades later.