In Luftwaffe Special Weapons 1942–45, leading Luftwaffe historian Robert Forsyth examines the many different types of weapons that comprised the Luftwaffe's increasingly potent arsenal during the second half of the war. On the blog today, Robert recounts how this fantastic new title came about. 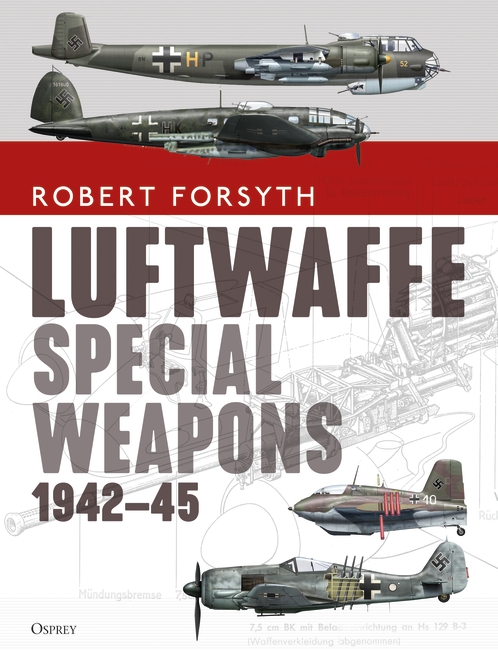 The immediate thing to say is that Luftwaffe Special Weapons has been a long time coming.

It’s a curious thing, but having now written approaching 35 books on Luftwaffe history, I have never stopped to think ‘Why, exactly?’ How did it get this far? The Osprey Blog! I’ll have a stab at that now.

Whilst clearing out an attic a few years ago I came across a box that contained some of my primary school books from when I was about seven. It was a slightly wincing process, but also quite funny. Paper exercise books filled with evidently enthusiastic, but crudely drawn pictures brought alive in vivid colour using school felt pens and depicting pivotal moments from history.

Knights in armour… Cowboys… Apollo rockets… Helicopters … and for some worrying reason, usually with lots of flames, explosions and bodies. I have no idea why.

But there was one project that I tackled with perhaps a little more intent: Louis Blériot’s epic crossing of the Channel in his monoplane. I’d found pictures of Blériot and his aeroplane and stuck them with glue into the exercise book next to my drawing of the Blériot XI. I do recall being impressed by this Frenchman who had flown across the Channel in a machine that looked as held together as one of my Airfix kits. So, I’m pretty sure that’s when what would become my lifelong interest in aeroplanes was germinated.

A short time later came the war comics and the war films and the black and white documentaries on TV about the Second World War, and more Airfix kits … and a little later still, the Biggles books, which I devoured.

Mine was a boyhood like so many thousands of others in the late 1960s to mid-1970s. In the wake of my parents’ divorce and as an only child, I think I sought refuge in the heroic exploits of aviators and their magnificent flying machines. As a nine year old, one rainy afternoon, my mother took me to see the film The Battle of Britain at the local cinema in the southern English town of Tunbridge Wells where I grew up. Probably much the same as with all those thousands of other little boys in Britain at that time, the film mesmerised me. It was very graphic, very colourful and full of wonderful aeroplanes. It was Batman and Robin in the air. But instead of the Batmobile, there were supremely elegant Spitfires and neat, business-like ‘Me 109s’ with red spinners. On one side of the Channel there was a band of very affable, every day sort of chaps who bravely ‘got on with the job’ of defending the skies over southern England in a calm, understated way, who would say ‘Tally-Ho’ as if they were out hunting or on the cricket ground, aided by some unruly Poles, and all kept in line by an increasingly exasperated Robert Shaw, a dashing Christopher Plummer and the heroically calm Michael Caine. I expected on the other side of the Channel for the ‘Jerry’ to be portrayed as buttoned-up, robotic stormtroopers who shouted a lot – just as they were usually depicted in the black and white prisoner of war/escape movies and the war comics upon which I fed. But it wasn’t like that in The Battle of Britain. The Germans were handsome-looking fellows in rakish uniforms and with impossibly blond hair and blue eyes who drank a lot of champagne in captured French chateaux. All in glorious colour!

But there was something menacing in the film; a dark undertone. This was the unavoidable; the film’s raison d’être, the story of Britain under fire and under threat – of bombing. All credit to the director and producers, they did not just focus on the remote, semi-chivalric jousting of the fighters; they also depicted the bombs and the fires and the smouldering ruins. And the bombs came in Heinkels. So, as a nine-year-old boy I first became aware of the Luftwaffe and the kind of war that it could wage. Afterwards, I spent my pocket money on a plastic kit of the Heinkel He 111 which I painted black (as well as most of my fingers) because the Heinkels often came at night. They were like flying Batmobiles or like scores of beasts being unleashed from a cave somewhere across the Channel and they made Laurence Olivier (Dowding) look very worried every time they appeared.

It was all very gripping and when I turned 11 I emptied the contents of my building society savings account, to which grandparents and Godparents had kindly donated over the years, and purchased a HUGE book from the local bookshop. It was called Warplanes of the Third Reich by William Green and it was stuffed with hundreds of pictures of amazing German aeroplanes – Messerschmitts, Focke-Wulfs, Heinkels, Junkers and so on… I think my mother was both horrified and impressed at the same time. But I found their designs so appealing and as good as anything in Thunderbirds or Captain Scarlet (and that was saying something). I also recall buying The Stuka at War by Peter C Smith (1971) and also Kenneth Munson’s The Pocket Encyclopaedia of Fighters 1939–45 published in 1969. They were truly formative books and I still have my treasured copies today.

The next important milepost came when I was about 14 and I discovered a book written by Johannes Steinhoff, a former Luftwaffe fighter ace with impossibly blond hair and blue eyes, called The Straits of Messina: Diary of a Fighter Commander. This book is an account of Steinhoff’s time as commander of JG 77 in Sicily in June and July 1943. In the book Steinhoff describes how elements of his wing of Bf 109 fighters were equipped with pairs of underwing 21cm air-to-air mortars for deployment against B-17 and B-24 bombers of the USAAF. These adapted infantry mortars were designed primarily to explode within a formation of enemy bombers so as to disperse it and break down the defensive firepower. The results were questionable despite the efforts of the German pilots.

I also read magazine articles, of a kind that were quite prevalent then, formed around the recollections of former USAAF aircrews who described what it was like to be on the receiving end of such weaponry – of the carnage that they could wreak. For some reason I became especially fascinated by this aspect of the air war – by the escalation in technology and firepower over a short period of time. The more the tide of the war pushed against the Luftwaffe, which was defending its homeland with considerable invention if increasing desperation, the more interesting it became.

In the 1980s, I let go of my interest in Luftwaffe pilots and aircraft for a few years to focus on rock music, rugby, beer, a girlfriend and a career (loosely in that order), but in the early 1990s I joined a group of fellow British enthusiasts and researchers known as ‘Staffel 90’ (it was a move that was to mould the rest of my life, but that’s another story). At one weekend meeting, a fellow member of the group mentioned in passing that he thought the Imperial War Museum in London housed a collection of German ‘armaments reports’. So it was that I met Phil Reed, at the time the curator in the Department of Documents. Phil was extremely helpful and introduced me to an amazing collection of reports prepared by German ballistics specialists and armaments designers who worked for companies such as Rheinmetall-Borsig. At the end of the war these reports had been discovered by the British at Rheinmetall-Borsig’s main firing range and proving ground at Unterlüss in northern Germany and moved to the Halstead Exploiting Centre (HEC) at Fort Halstead in Kent. Others were written in the immediate post-war period for the HEC (while memories were still fresh). 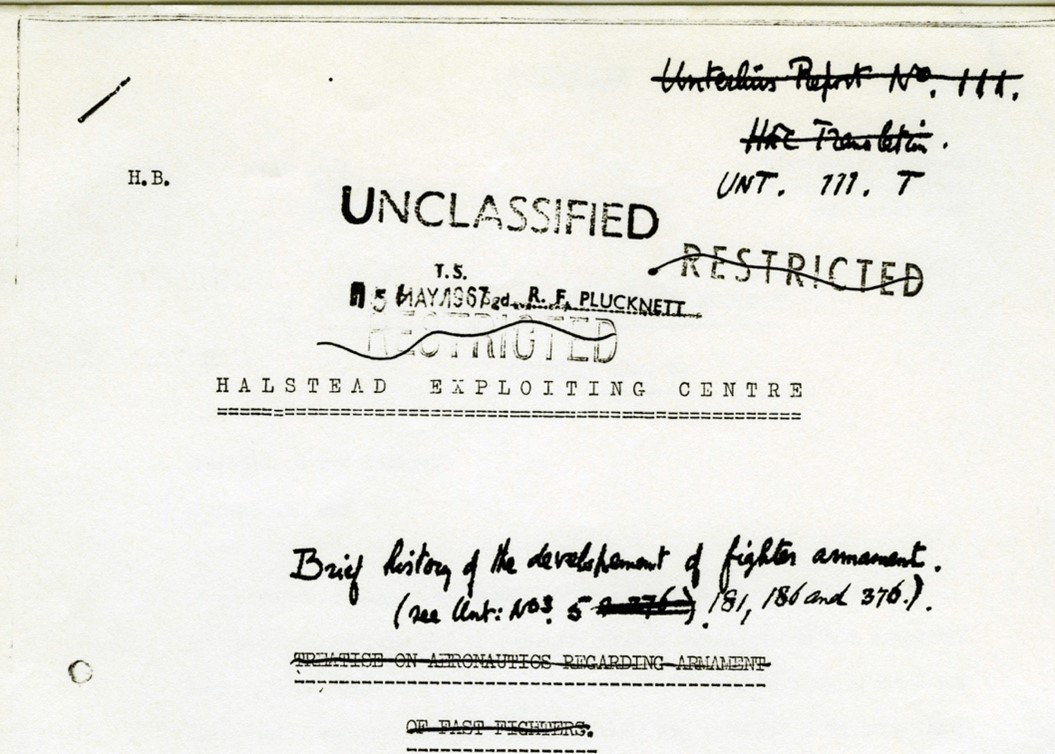 This was the beginning, and over the next few years I was able to travel to Germany where I met Luftwaffe historians such as Hanfried Schliephake and Manfred Griehl who kindly gave me copies of many documents from their own extensive files on Luftwaffe air armament development, testing and operational deployment. I was also fortunate to meet and interview several former Luftwaffe pilots involved with the testing of such weaponry, including Horst Geyer, the commander of Erprobungskommando 25, the unit responsible for operational evaluation of airborne weapons systems – many inventive, radical and practical, some less so, but still extraordinary. Herren Schliephake, Griehl, Geyer and many others proved to be wonderful sources of knowledge and experience, and slowly but surely I was able to amass a significant amount of documents. 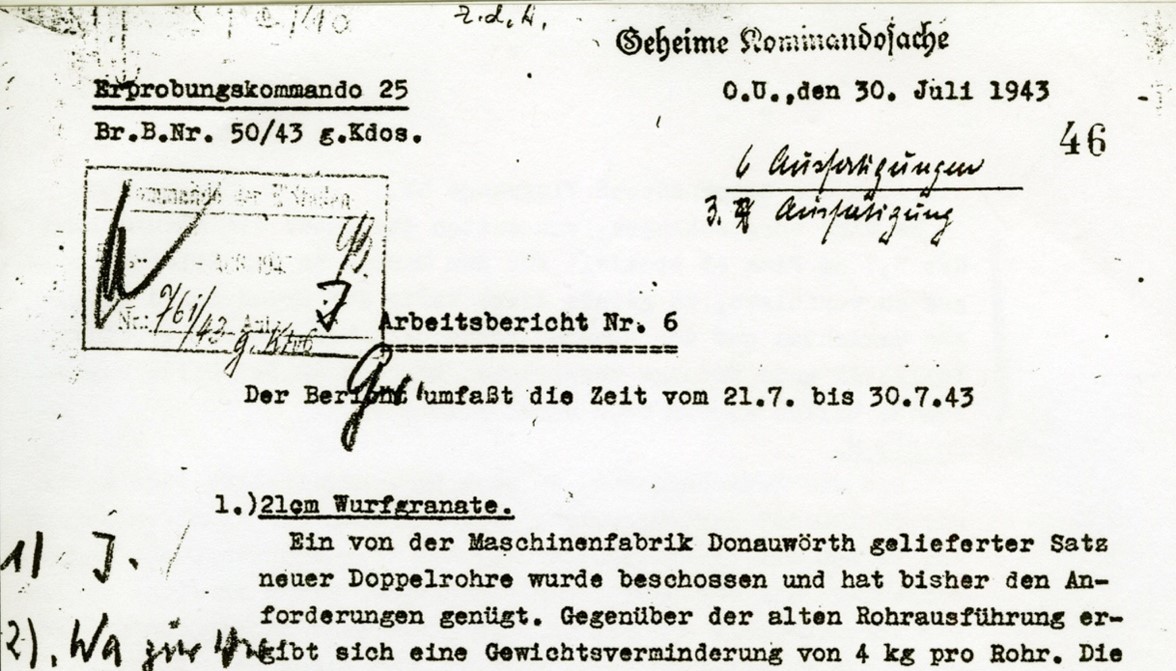 As I recount in Luftwaffe Special Weapons, the Luftwaffe received suggestions and proposals for weapons from civilians, companies and manufacturers, and from other branches of the armed services. Such proposals covered air-to-air weaponry from rockets, cable bombs and advanced automatic triggering systems, to artificially generated gusts of air, as well as heavy cannon and missiles for ground-attack and anti-shipping warfare.

Eventually, I was able to collate all the material I had gathered and the results are now published in Luftwaffe Special Weapons.

Luftwaffe Special Weapons 1942–45 is out today. Order your copy from the website!