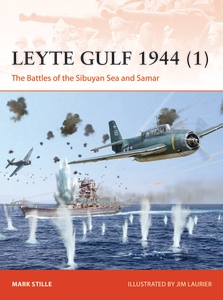 The Battle off Samar essentially ended at 0911 on October 25 when Vice Admiral Takeo Kurita, commander of the First Diversionary Attack Force, issued orders to break off the action. In two hours of confusing combat against what he thought was an American fast carrier task force, Kurita’s force had three heavy cruisers crippled by American air and surface attack and had lost all its cohesion. It took two hours to reform his force. Once accomplished, Kurita ordered his 15 remaining ships to head southeast to Leyte Gulf, which was only 45nm away. After sending a message to the commander of the Combined Fleet, Admiral Soemu Toyoda at 1205 with his intent to penetrate into the gulf, at 1235 he reversed course. At 1310 his force passed near the area of the battle against the American carrier force and continued north. With the door to Leyte Gulf open, Kurita changed his mind. What happened?

Even after the losses from the morning, after reforming the First Diversion Attack Force was still a powerful formation. Four battleships were in fighting condition with plenty of ammunition. The once formidable force of ten heavy cruisers had been whittled down to only two – Tone and Haguro. Light cruisers Yahagi and Noshiro led a force of nine destroyers, this number having been reduced after Kurita dispatched Fujinami and Nowaki to assist the crippled heavy cruisers Chikuma and Chokai.

There are many reasons explaining Kurita’s decision to turn back and forego the ultimate objective of Sho-1 and any kind of Pyrrhic victory for the Imperial Navy. The first was his assessment that overwhelming American forces were gathering to complete the destruction of his force. Kurita believed that he had just tangled with part of Admiral “Bull” Halsey’s Third Fleet. During the action, another carrier task force had been spotted to the southeast, probably more elements of the Third Fleet. During the battle, other American commanders were active in communications pleading in the clear for help from Halsey. These seemed to indicate that more forces were already near Leyte Gulf or on their way. These assumptions about the Third Fleet gained traction since Kurita had heard nothing of Vice Admiral Ozawa’s success in drawing Halsey’s force north to attack Ozawa’s decoy force of four carriers. Furthermore, Kurita was aware that his Third Section under Vice Admiral Shoji Nishimura had been annihilated trying to enter Leyte Gulf that morning by way of Surigao Strait.

Kurita probably held a fatalistic view of his prospects for survival as part of Toyoda’s Sho-1 plan. This view was probably shared by all other officers of the fleet. Kurita and his men did not mind dying, but they wanted their deaths to count for something. Even before the departure of the First Diversion Attack Force from Brunei, there was open discontent of having to sacrifice the fleet, which represented the cream of the Imperial Navy, for mere transports. No doubt Kurita shared this sentiment. He was smart enough to realize that after the encounter with American carrier force off Samar the American would move any valuable ships out of the gulf if they had not already done so. An aircraft from battleship Nagato flew over Leyte Gulf and reported at 1235 that there were 35 transports in the gulf, not a lucrative invasion fleet. Kurita’s greatest fear, which was shared by his chief of staff, was that his force would find itself in Leyte Gulf with nothing to attack, or at least nothing valuable to attack, and then be trapped and annihilated by American air power and surface ships. About the same time he was deciding whether to press south, he received reports of an American carrier force to the northeast. This report was false, but it gave Kurita an excuse for breaking off the advance south toward Leyte Gulf. Better to fight carriers than empty transports. Kurita’s extreme mental and physical fatigue, which he admitted to after the battle, must also be taken into consideration. His entire staff concurred with the decision not to press the attack into the gulf.

In the final analysis, the contradictions of the ill-conceived Sho-1 plan were so marked that not even a hard-bitten veteran like Kurita could live with them. Kurita’s wartime record showed he was no coward. The events of the past three days during which he and his force had been subjected to relentless submarine, air, and surface attack made clear his fate if he pressed into Leyte Gulf. In the end, Kurita declined self-immolation with no purpose. By doing so he saved the lives of most of the approximately 15,000 men left aboard the First Diversion Attack Force. At 1236, he signaled his intent to Toyoda to abandon the attack into Leyte Gulf.

The Sho-1 plan, built around the objective of getting Kurita’s force into Leyte Gulf, was utterly without hope. Toyoda knew it as soon as it was created, and every other Japanese naval officer with any insight knew it as well. In fact, the American invasion force that landed over 132,000 men on Leyte was long gone by the time Kurita had to decide whether to press his attack into the gulf. The entire point of Sho-1 was fatuous since there was never a chance Kurita’s force would arrive in time to attack the American invasion force. The man ultimately responsible for ordering his force to carry out the act of idiocy of entering the gulf four days after the American invasion force had already departed declined to sacrifice his men for no other purpose than to uphold the Imperial Navy’s peculiar brand of honor. Of all the Japanese command decisions of the battle, Kurita’s was the most courageous.