The US-backed Kurdish YPG/SDF fought on the front line of the war against Islamic State for five years. The new Vanguard title just published, Kurdish Armour Against ISIS reveals how they developed their own armoured force using captured tanks, homebuilt armour and 'technicals', and the role they played in the defeat of 'Daesh'. On the blog today, authors Ed Nash and Alaric Searle discuss how this title came about and the challenges they faced. 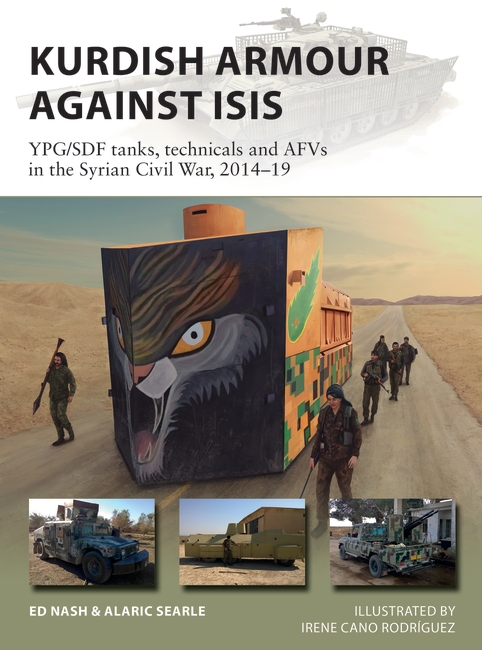 QUESTION 1: Why did you pick this subject?

Ed Nash: I would not say I chose this subject, rather it chose me when, by a series of fortunate coincidences, Professor Searle ended up suggesting it would be worth tackling the subject together. I fought in Syria alongside the Kurdish YPG/J in 2015/16 and therefore saw the early development of the SDF armoured units and personally participated in their combat deployments. It also meant I had pictures and footage of the SDF armoured units both training and fighting.

Alaric Searle: I had been following the Syrian Civil War online, so to speak, from its origins back in 2011. I had watched the rise of ISIS with considerable horror; likewise, I found the Kurdish resistance to be inspiring, so wanted to delve deeper into the subject. The appearance of improvised armoured vehicles was obviously of great interest to me, especially as while the war was raging I was busy completing my study of armoured warfare from 1916-2016, which was published by Bloomsbury in 2017 as Armoured Warfare: A Military, Political and Global History. There was also a huge gap in the literature when it came to vehicles employed in the Syrian Civil War. There have been plenty of online articles, but these are often superficial and do not go into the subject matter in any detail.

QUESTION 2: Why did you decide to co-author this book?

Ed Nash: Professor Searle asked if I would be interested in co-authoring a book on the subject. I was hesitant at first. He is an internationally recognised expert on armoured warfare, whereas my experience revolved around occasionally falling out of ancient personnel carriers in desperate scrambles to “debus” before getting hit. But as we worked together it became plain that there was a great deal to be said about combining my personal takes and observations with his academic knowledge on the subject. Hopefully, the readers will see and appreciate that.

Alaric Searle: Teaming up with Ed Nash to write the book seemed like a really good way to combine on-the-ground experience with my background as a historian. I had also read his memoir Desert Sniper when it was first published, so his personal experience was always going to be essential in tackling the subject. It is actually quite uncommon for historians to co-author books. I am relatively new to joint writing projects, but this one proved to be very worthwhile. Two heads were definitely better than one when trying to piece together the course of the Syrian Civil War, not to mention examining a whole range of AFVs, from Mad Max DIY constructions, to captured old Soviet tanks, right through to more up-to-date US equipment.

QUESTION 3: What were the challenges in researching and writing this book?

Ed Nash: I would say primarily writing about the events that occurred both before and after my participation in the war. I can talk quite happily about my experiences, but my knowledge of other parts of the conflict is more limited. This is another reason our teaming up worked so well – Alaric’s overall knowledge meant he could handle these sections better than I could.

Alaric Searle: The first one for me was that I have never been to Syria! Beyond that ‘slight difficulty’, there were many hours’ work involved in sifting through newspaper and online reports of events in the war; and hours of online video material had to be viewed. It is obviously the case that the date when footage is posted is quite significant, at the same time it is important to bear in mind that captions or descriptions of footage may not always be accurate. Working off photographs can also be a challenge, but with a broad knowledge of vehicles in the twentieth century it is usually straightforward to identify ex-Soviet AFVs or US-made equipment. But when adaptations take place, sometimes it is hard to know where the parts have come from, or which variant of a vehicle you are looking at.

Above all, homemade tanks and armoured cars presented their own considerable challenges. Many of them do not have names for a start – they were just referred to as panzers by the Kurds. Some of the AFVs were unique; similar looking vehicles still had differences. One of the DIY tanks which appears as an artist’s illustration in the book (together with a T-55) presented an interesting conundrum in terms of establishing the origin of the chassis. We were able to identify it as based on a Caterpillar Co. bulldozer or digger, the D4 model. Closer examination of the chassis shows that the engine is to the rear of the improvised tank, whereas in the original caterpillar vehicle it was positioned at the front. This provides in a small way an indication of the degree of technical know-how the YPG developed in a relatively short period of time, so they could adapt a civilian chassis and construct their own tank in a workshop, making use of a BMP-1 turret. The real difficulty, however, is obviously the dearth of any written documents which might give an indication as to when certain improvised vehicles were built. It is possible, nonetheless, to identify specific phases in the development of construction techniques and to provide ‘guestimates’ of which half-year ‘production’ may have occurred in.

Given the chaos caused by the war, though, I doubt very much whether anyone will be able to achieve a greater degree of accuracy than we have hopefully achieved in this book. At least, it is likely to take some time before any written material surfaces which might adjust our current level of knowledge. This said, we do not consider our book ‘the last word’ on the subject – it is more a ‘first attempt’ to tackle the question of Kurdish AFVs.