In today's blog post, Michael Napier gives a brief overview of the Korean Air War, the conflict explored in his fantastic new release. 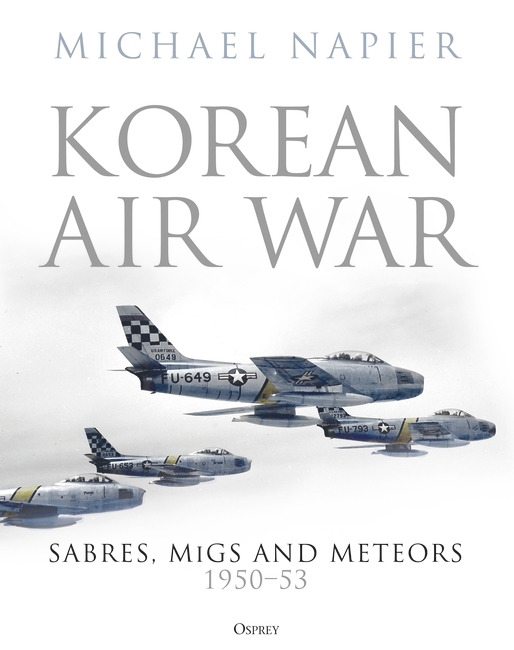 Just before dawn on Sunday 25 June 1950, South Korean troops stationed along the demarcation line with North Korea were roused by an artillery barrage fired from across the border. Shortly afterwards, ten divisions of North Korean troops of the Korean People’s Army (KPA), supported by tanks and aircraft, swarmed across the 38th Parallel near Kaesong and Chuncheon, and advanced into South Korea. Simultaneously, a smaller force of North Korean marines carried out amphibious landings near Kangnung (Gangneung) and Samchok on the east coast. Taken completely by surprise, the poorly equipped South Korean forces of the Republic of Korea Army (ROKA) fought back bravely, but their units were swiftly overwhelmed by the North Korean assault. Thus began a war which would cover the whole length of the Korean peninsula within the next few months. Rather than leading to the swift victory that the North Korean leadership had expected, the conflict followed its violent course for the next three years. The United States, the Soviet Union and China all became embroiled, as did many other countries which rallied under the auspices of the United Nations (UN) to support South Korea. In the skies over Korea, the US Air Force (USAF) battled with the Soviet Voyenno-Vozdushnye Sily (VVS) and the Chinese People’s Liberation Army Air Force (PLAAF). The air war also involved the air forces of North and South Korea, the Royal Air Force, the Royal Canadian Air Force, the Royal Australian Air Force  and the South African Air Force, as well as the US Navy, the Royal Navy  and the Royal Australian Navy. A diverse range of aircraft from jet fighters to wartime-vintage propeller aircraft and early helicopters was included in the conflict. Air combat over Korea brought its own lessons in tactics and organisation, most of which remain valid today.

The Korean War is very much a forgotten conflict, but it holds a unique place in history for a number of reasons. Firstly, it was the first war involving large-scale jet-versus-jet combat, where the tactics of high-speed high-altitude flight were tried and validated. Secondly, it was the first war fought by the newly independent USAF, which came of age and finally broke free from meddling by US Army commanders during the conflict. Thirdly, it was the baptism of fire of the recently formed Zhōngguó Rénmín Jiěfàngjūn Kōngjūn (PLAAF) and is still regarded in China as an important victory over neo-colonial forces. Finally, it was the first major conflict fought between the armed forces of the USA, the USSR and China, and military action was very much limited by political constraints; the experience of Korea served as a template for the conduct of subsequent proxy-wars between the super-powers over the next half-century. During the Korean War, many lessons were learnt about the organisation and prosecution of modern aerial warfare, and those lessons are still valid today.

Over the years, a number of books have been written about the Korean War, but each appears to tell the story from just one perspective and none of them seems to be entirely objective. Furthermore, some of these works are difficult to follow as they do not follow a chronological sequence of events. My aim has been to produce a comprehensive, logically ordered, and impartial account of the air war over Korea, although I have also taken the opportunity to highlight the little-known participation of the Royal Air Force in the conflict.

The first months of the Korean War were characterised by a ‘yo-yo’ series of land campaigns. In the first month of the conflict,  the KPA of North Korea drove the South Korean ROKA back to Pusan (Busan), in the  southeastern corner of the peninsula. Then, in mid-September, the United Nations Command (UNC) launched a campaign which included an amphibious landing on the west coast, far behind the KPA lines at Inchon, near Seoul, and advanced into North Korea, reaching the Chinese border on the Yalu River in late October. This precipitated a counter-offensive by the Chinese People’s Volunteer Army (CPVA), which eventually saw the front lines stabilising, in early 1951, close to the original demarcation line between the two Koreas on the 38th Parallel. This stalemate, in some ways reminiscent of the trench warfare of World War I, continued for the next two years, until an armistice was signed in mid-1953.

All of the land campaigns were supported by tactical aircraft, and, indeed, it was mainly US air power that delayed, then halted, the initial KPA advance towards Pusan. For the KPA, offensive support was only available in the first few months until the Korean People’s Army Air and Anti-Air Force  was almost destroyed by US/UN air power in the breakout from the Pusan perimeter. Thereafter, the KPA and CPVA fought at a significant disadvantage without air cover, while  aircraft of the USAF, the US Navy (USN) and the United States Marine Corps (USMC), joined by squadrons from Australia and South Africa, supported UNC land forces and interdicted the CPVA/KPA resupply lines. Meanwhile, Soviet VVS units, flying the MiG-15, undertook the strategic air defence of the Chinese borders and the industrial sites in northwest Korea. They were later joined by MiG-15 units of the PLAAF. The arrival of the MiG-15 in December 1950 caused the UNC to request the deployment of the F-86 Sabre. Clashes between MiG-15s and F-86s in ‘MiG Alley’ between the Yalu and Chongchon Rivers became a daily feature of the Korean War. Operating mainly off the east coast of Korea, the USN Task Force 77 flew numerous interdiction missions into North Korea, as well as close support missions for ground forces. Off the west coast, British, Australian and USMC carriers also played their part. Throughout the war, World War II-vintage B-29 Superfortresses bombed industrial and strategic sites in North Korea by day until the MiG-15s forced them to fly by night, and B-26 Invaders searched out road convoys and trains carrying supplies to the CPVA/KPA front lines.

This book describes each of these facets of the air war over Korea, presenting, for the first time, a complete picture of the Korean Air War.