On the blog today, author Gregg Adams tells us more about the island of New Guinea and the battles fought there between Japanese and US soldiers during World War Two. 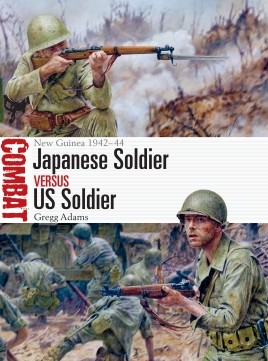 When I was asked if I was interested in writing a volume in the COMBAT series on New Guinea I replied “yes, but...”. This “but” came from the thought that a New Guinea COMBAT volume should profile Australian forces; and I did not think that I could do justice to these soldiers. It was then explained that a volume covering US soldiers versus Japanese was intended. With this caveat, and acceptance of a suggestion to focus on the US Army National Guard, I accepted the challenge. CBT 60, Japanese Soldier vs US Soldier: New Guinea 1942–44, was the result. Australia’s considerable ground, air, and naval support to American forces during the campaign are pointed out in my book. I hope a future COMBAT volume will cover Australian forces versus Japanese forces on New Guinea.

New Guinea is the second largest island in the world. Located between the equator and 11 degrees south latitude, it has a hot humid climate along the coast with very heavy rainfall. Inland mountains are frequently forest-covered with heavy fogs. In 1942 the island had no substantial infrastructure; roads were few and far between, there were no cities, no rail lines, and no industry. While the war in the Pacific was the greatest naval war in human history, ground combat was still important. Ground forces had to fight to capture and defend air and naval bases or locations where bases could be built. This was why soldiers fought on New Guinea where jungles, insects, climate, and disease were as much a problem as the enemy. New Guinea was a campaign in which engineers were as important as infantry. Engineers had to build airfields, ports, bases, and almost every piece of infrastructure a mid-20th century army needed. The vital role of engineers is shown by the composition of the landing force on Z-day (May 27, 1944) at Biak. This force included six infantry battalions and three aviation engineer battalions (for airfield construction). Later the Biak force was reinforced by another six infantry battalions as the extent of the Japanese defenses were discovered.

Each of the actions studied in this book took place to capture or defend air fields on the north coast of New Guinea, or an adjacent island. The battles on New Guinea were small in comparison to those in Western and Eastern Europe. The largest American battle on New Guinea involved one army corps that controlled two divisions and two regiments. Their opponent was a Japanese Army with two depleted divisions. Other encounters were fought by reinforced divisions against regimental sized Japanese forces. New Guinea battles were fought at the battalion, company, platoon, and squad level, frequently with fluid front lines, and sometimes no front lines. Smaller forces mean these fights permit a more detailed view of combat. It takes less space to document the actions of four battalions than four divisions with the same level of detail.

One aspect of the Pacific War that is illustrated by the New Guinea Campaign is the great differences between the Japanese Army and the US Army. Japan went to war with a rifle and bayonet-centric army having a mystical faith in the ability of “fighting spirit” to overcome modern technology. Japanese units had less artillery than their Western counterparts; a Japanese infantry division had 36 guns (usually 75mm) in their divisional artillery, while an American division had 36 105mm and 12 155mm howitzers. Japanese belief that infantry night attacks could overcome artillery ignored the ability to pre-registered artillery fire missions that could be quickly called down by radio or field telephone by forward observers with the infantry. When the Americans did not break and run, the Japanese had no alternate course of action; they continued to attack with fixed bayonets. Credited at the time with being combat experienced after years of fighting the Chinese, the Japanese had drawn many wrong lessons from China. The lessons that the Japanese should have absorbed to fight the West were those that could have been learned from their defeat by Soviet forces in 1939 at Nomonhan in Mongolia. There an armor and artillery heavy Soviet force smashed heavily reinforced Japanese division. However, the Japanese High Command ignored Nomonhan. Because the Japanese went to war with flawed doctrine and limited firepower, almost 90% of the 100,000 soldiers sent to New Guinea perished. Once isolated from resupply, those not killed in combat feel victim to starvation and sickness.

The New Guinea Campaign in World War II is a fascinating story. It ranges from national command and strategy and coalition warfighting through air, naval, amphibious, and land warfare. I hope CBT60 provides some insight into a frequently overlooked campaign and helps with understanding something of close-quarter infantry fighting.

Japanese Soldier vs US Soldier: New Guinea 1942–44 is available to order here