Today on the blog we’re looking at one of the more unusual and complex civilisations to play: the Olmecs, the earliest known major Mesoamerican civilisation (approximately 1500 BCE to 400 BCE). One thing to note is that we have used the Spanish names for the regions in the Olmec deck because no one knows what the Olmecs called them. 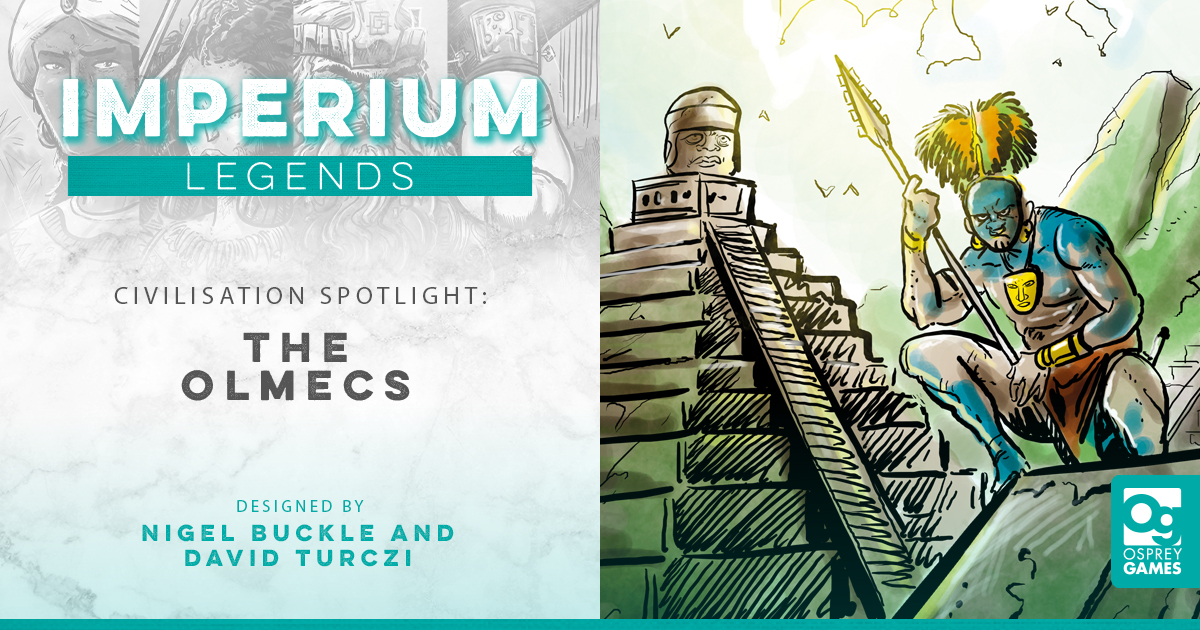 We generally recommend players look through the cards of a civilisation before playing, and this is vital to understand and play the Olmecs with any degree of success – they are very different from the other civilisations featured in the game. This is deliberate; we wanted the Olmecs to feel totally distinct to reinforce their uniqueness.

The first thing to note is the Olmec power card gives no end-game victory points – apart from the Utopians (another complex and unique deck), all the other civilisations give victory points for at least one side of their power card, and players can use these victory points as a suggested direction when playing that nation.

Secondly, you will notice the large number of Stone Mask cards. Understanding how these cards are used and their interactions with the other Olmec cards is the key to success playing this civilisation. You might think, given their card effect, that the main use of the Stone Masks are to search your draw deck for cards and then to put them into your history to score end game points. While that is true to some extent, you should be using the masks for far more than that!

The Olmec deck does not have the usual utility cards (Prosperity, Conquer, and Advance) most decks feature. Instead it has Ball Games, Loadestone Compass, and Calendar as pin cards that will go into your tableau when played. You power these cards with Stone Masks to get the same effect as the missing utility cards would provide in another deck. These pin cards all work in the same way; spend one of your actions, discard mask cards from your hand, and gain the effect. This allows you greater flexibility: with more pinned utilities in play, you can decide which one to use your stone masks on. At the same time, it provides greater challenges: when is it worth “wasting” an action playing the utility? What do you do if you’ve expanded your deck and you’re not able to reliable draw your masks? When should you start putting the masks into your history? 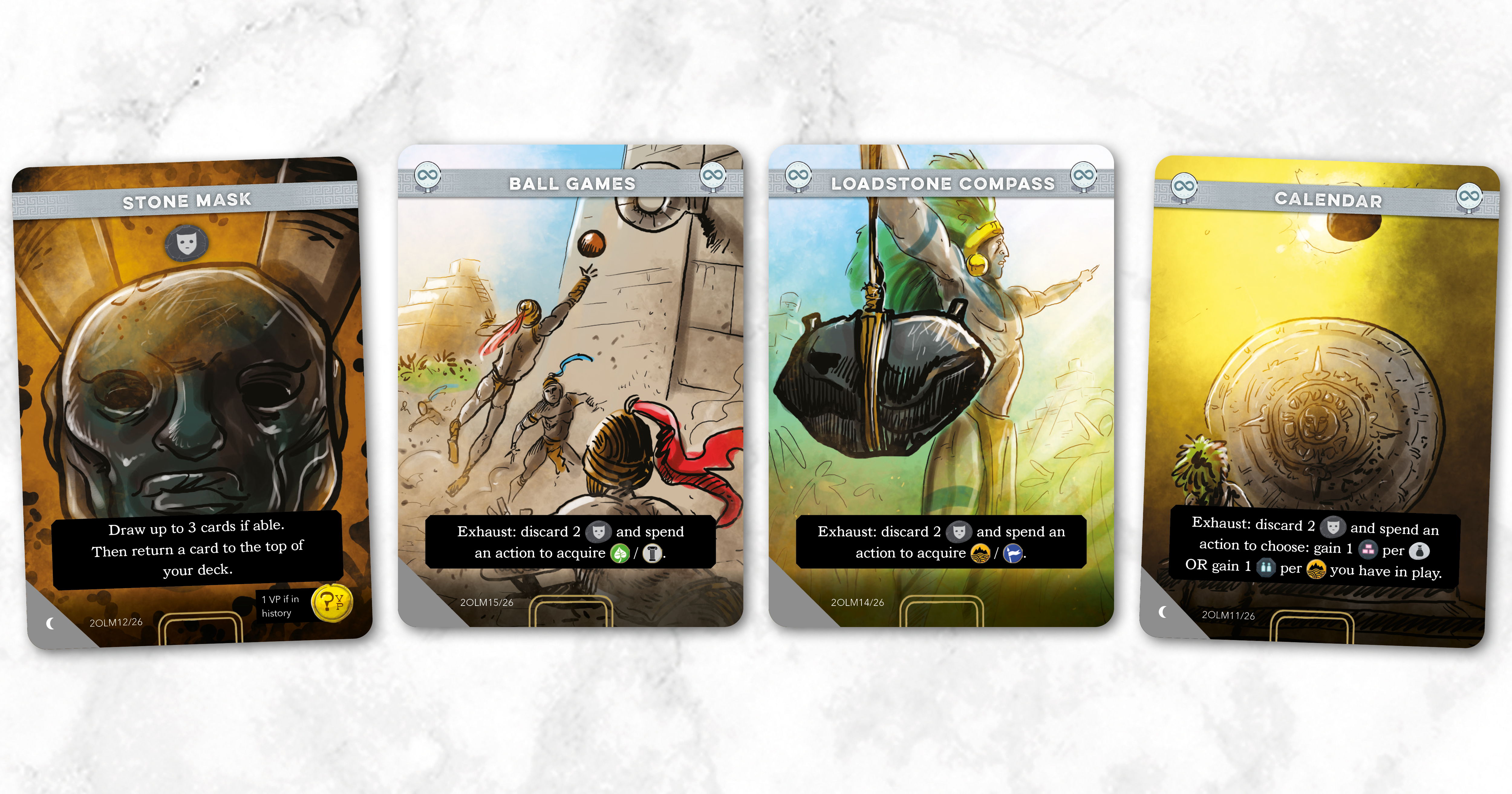 The Olmec deck also does not have a Glory card, so gaining fame as the Olmecs is quite a challenge. You’ll need to use your Ritual Sacrifice, but as that is a development card, you first need to become an empire. On top of that, you also need to develop Step Pyramids and get that card into play. While your opponents will try to exploit this weakness, take heart that you have access to much more stable and flexible tableau, once you’ve build it.

We rate the Olmecs as one of the more challenging civilisations to play (difficulty rating 4 out of 5) and you are likely to need a few plays to explore the different strategies you can follow as the Olmecs and to master them and maximise efficient mask use. You have a number of cards that can be used in different ways or in combination with other cards. As an example, Olmec Hieroglyphics allows you to get an additional use out of an exhaust ability or return a card from your discard pile to use it again. Another example is the accession card San Lorenzo Tenochtitlan, this is a unique metropolis for the Olmecs which you can slow down your deck cycling to retrieve a mask or gain some resources.

Once you master tableau building, hand management, and how to efficiently use your masks, you’ll find the Olmecs a gratifying civilisation to play. 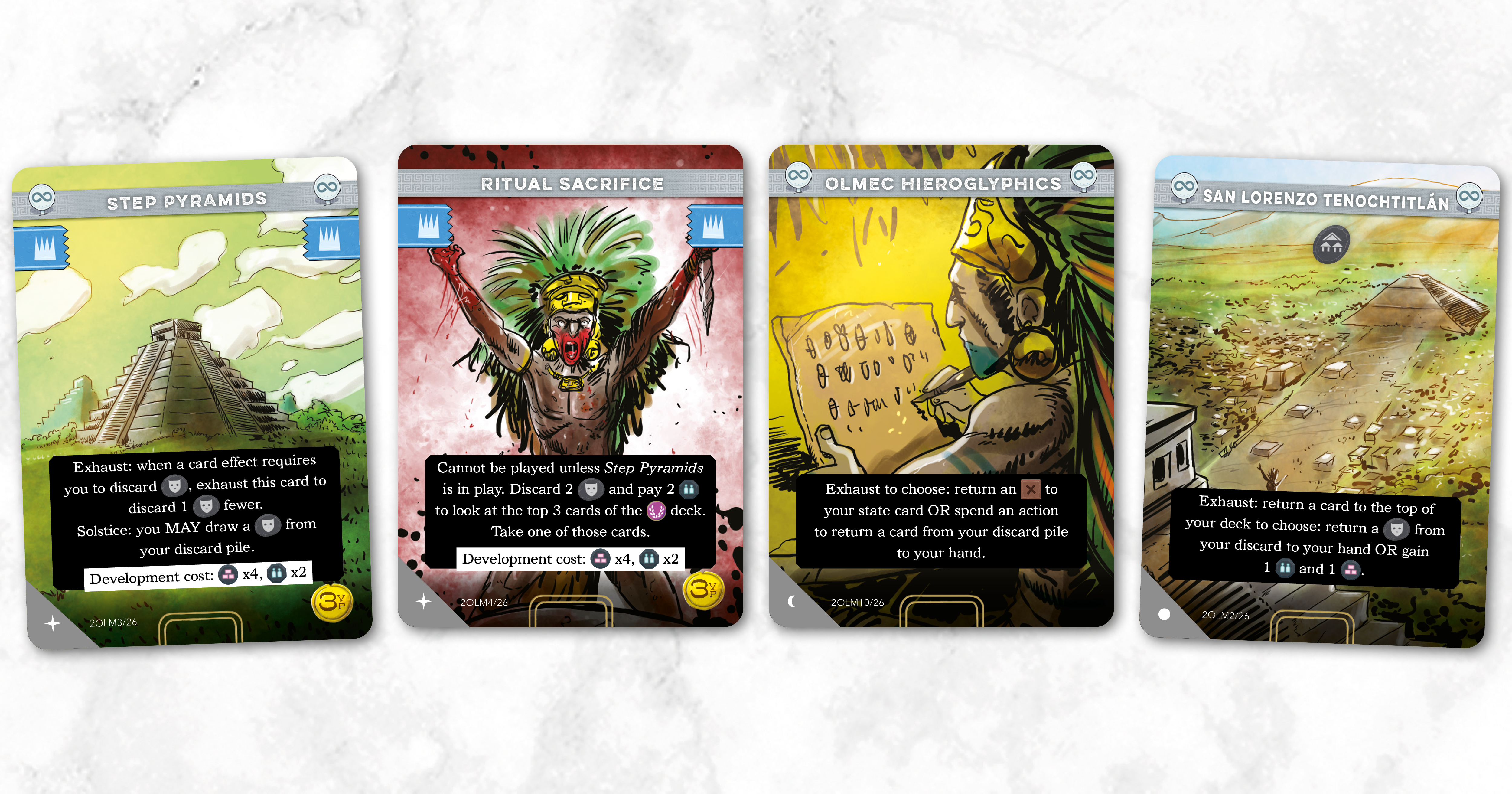