Today on the blog we’re looking at the Greeks, by which we mean the Archaic Greek and Classical Greek periods (from the 8th to the 4th Century BCE). These periods cover a massive change within Greece and its influence across the entire Mediterranean. 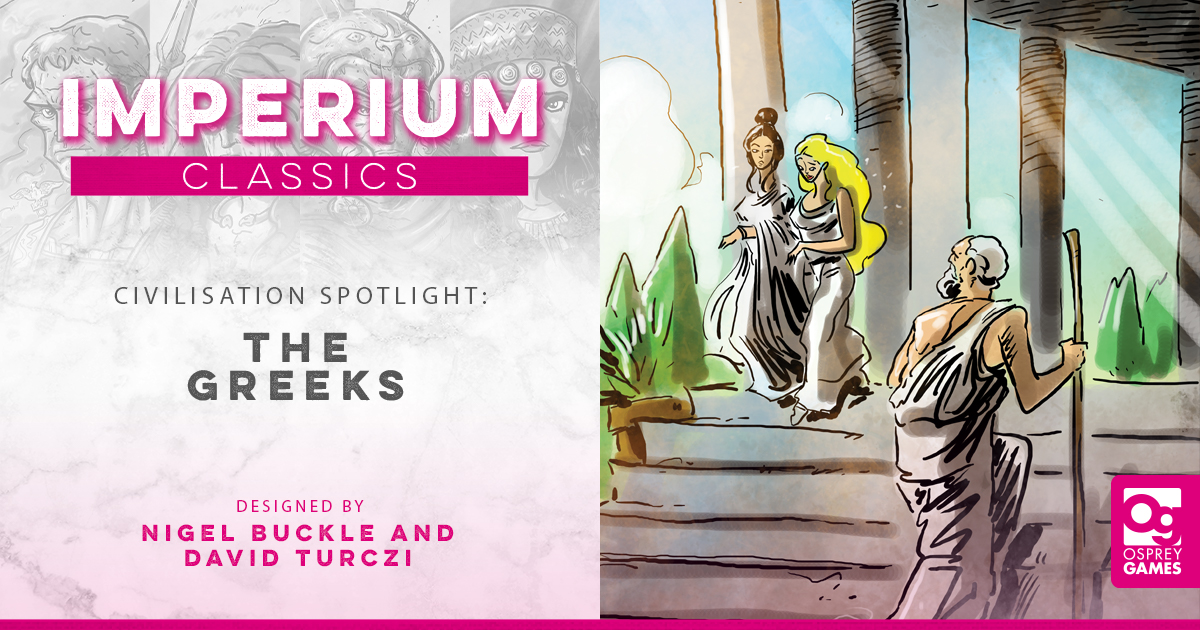 We consider the Greeks the trickiest civilisation to play in the Classics box (difficulty rating 4 out of 5), and this is because of the large number of different strategies that are available when you play them.

The Greek power card gives you victory points for cards you possess at the end of the game (in play, in your deck, in your hand and in your History), but the Greeks are about more than just collecting cards. The A side of the Greek power card gives you the first challenging tool to wield, allowing you to spend 2 actions to break through for a civilised or uncivilised card. This is an indication of what the Greek deck excels at - acquiring cards in the market, building a dominant tableau, and utilising powerful action cards. As you can guess, buying any old card won’t help you. You’ll want cards you can either pin, or use as free actions, or that give you secondary ways to score.

The early Greek cards represent the start of the Greek dominance of the Mediterranean. The City of Sparta, Greek Mercenaries and Settlers can generate the resources you need, and help you acquire territory, though you can also use the usual Advance and Conquer cards. However, you do not start with a prosperity card. You have to wait to become an empire and develop Greek Prosperity to get access to that effect. In the meantime, you’ll rely on your supply of Cities (Sparta, Athens, and later Corinth) to cycle through your deck. Of course, using your cities to draw cards denies you the other resources they could supply. The Olympic games is the Greek accession card, and you are likely to want to make significant use of this card to remove the cards you do not need from your deck and help you cycle through it efficiently.

Once you become an empire there are a number of different strategies you can follow, depending on what cards you have already acquired from the market. You can continue to gain cards by developing Science, which then allows you to keep using your Advance card, or you could try Philosophy instead. Alternatively, you could be more aggressive, using Greek Innovation to give you more flexibility over the cards you gain from the market, and disrupt your opponent’s tableaus. The key to success with the Greeks is recognising the crucial cards in the market, and utilising your more readily available means of acquiring them before your opponents can. Then, you need to establish a strategy that incorporates your new cards so that you can continue to draw cards, gain resources, and develop. To help boost the effect of your own cities, you will be on the lookout for more cities and Metropolis, or any card that will help your Cities be more efficient, like Urban Development. You also will want to acquire or exile the dreaded Onager, as you are particularly vulnerable to that attack card. If you are combining games and using the common deck from Legends then Masonry is a great card for you.

Your nemesis are the Persians. They have their mighty Battering Ram and they can easily take the tributaries they need from the market, somewhat nullifying your market advantage. You can recreate this ancient history match up in Imperium: Classics and we look forward to hearing how you fare!