Today on the blog we’re looking at the Celts, who were a collection of different tribes who shared a common language and other cultural similarities rather than a cohesive empire. For the purposes of Imperium we have combined the Gauls (who lived in modern day France) with the tribes from Britain and Gaelic Ireland. 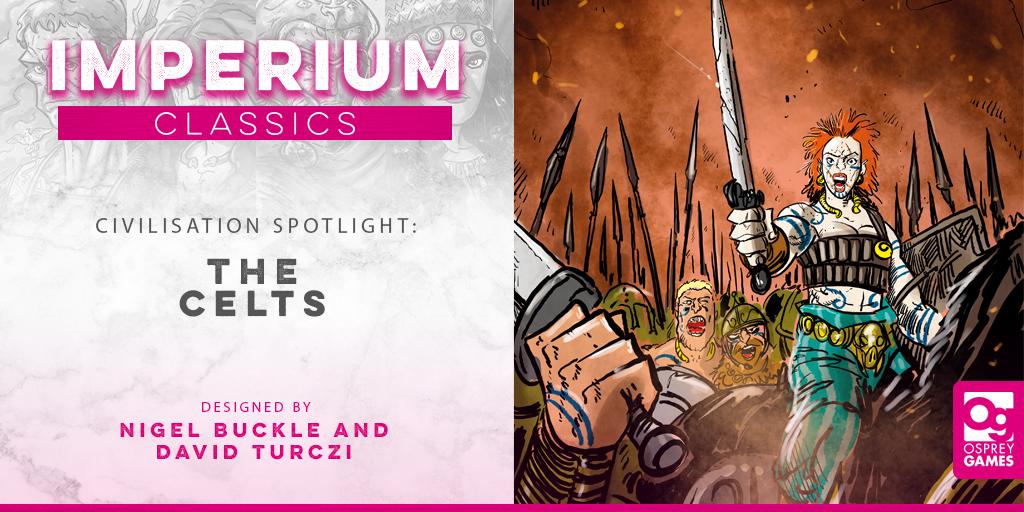 To give the Celts a different feel from the other nations of Europe, we have incorporated some of their myths into their cards. This, along with their attack cards and nation power, tend to make their play style more aggressive, or at least more likely to generate unrest for their opponents. It makes them an especially great foe versus the Romans, who rely on an expansive tableau to support a lean deck wanting to play Glory often. Celts versus Romans – thematically appropriately, we might say – is one of the most “meant to be” two-player pairings in the Classics box.

One thing you will quickly notice when playing the Celts is the lack of a Prosperity card. This card is what many nations use to generate materials and population from regions in play. Instead, the Celts go on Cattle Raids to generate materials (and they are not averse to stealing materials from their opponents, especially if they are empire states), and utilise the mythical Cauldron of Cerridwen to convert progress into population at a more favourable rate than usual. A key utility card is your Druids which can generate population, progress, and manage unrest.

The aggressive side of the Celts is visible in their barbarian state leader – Boudicca. She’ll gain you a progress (that you can convert to two population with the Cauldron) and slow down your opponents by forcing them to abandon (discard) a played region.

Market cards you are particularly looking for are useful uncultured cards, attack cards, and fertile regions. 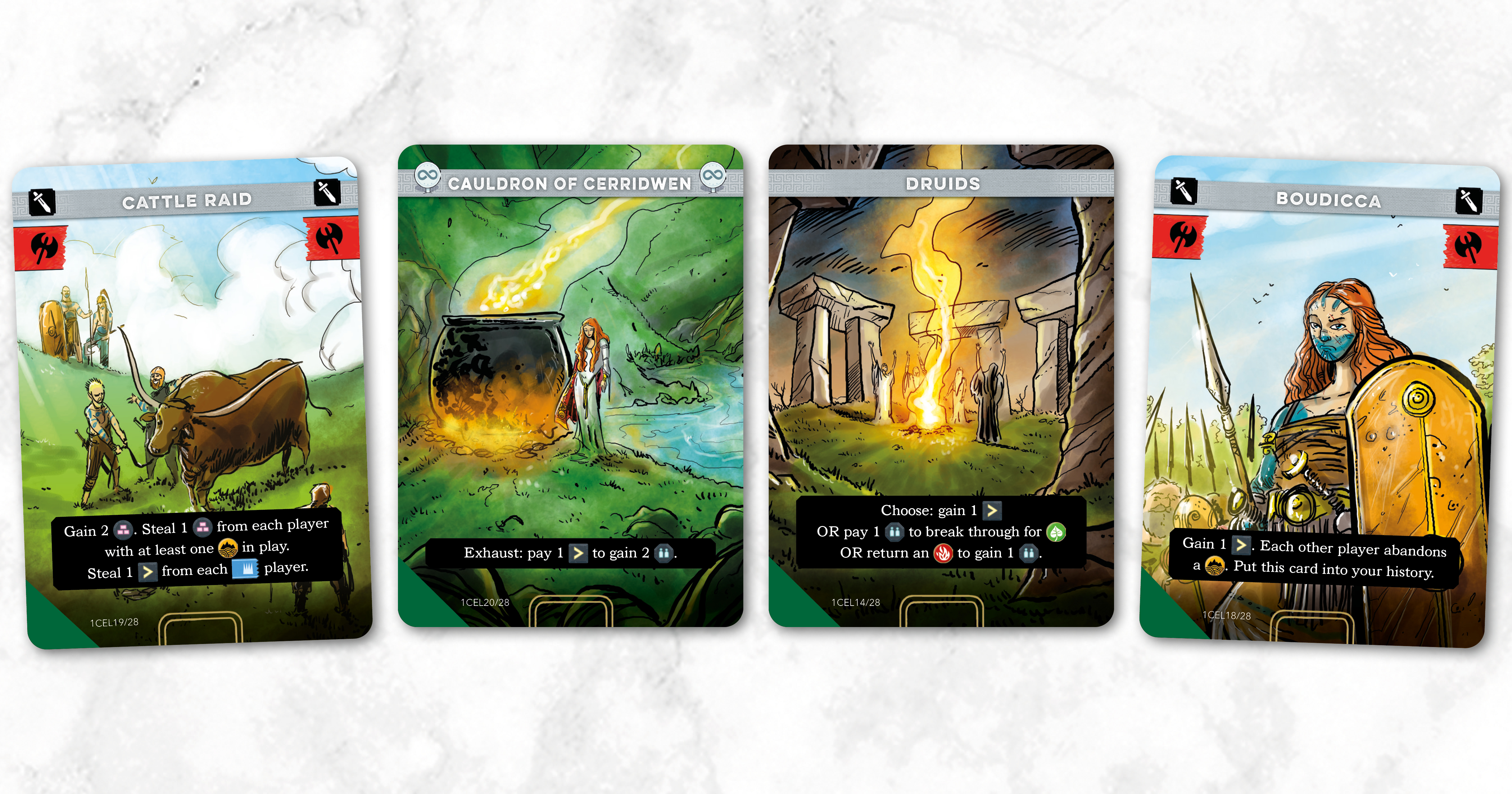 When eventually you become an empire, your accession card Celtic Gold will generate ample materials, especially if you have managed to conquer an additional fertile region or two. Your aggressive style does not need to end during your empire state – you can develop chariots to keep conquering and cattle raiding. You will certainly want to develop your other leader Vercingetorix, both for his end game scoring of uncultured cards and for his useful ability to acquire any market card.  The complication is that your nation deck is quite large – at seven cards it’s one of the largest ones in the game, so if you don’t hurry, the game might end before you even get to be an empire! This represents the thematic and historical fact that the Celtic tribes weren’t prone to classic empire-building, and by the time they did mostly band together (against the Roman threat), all other Mediterranean civilisations have long been turned into an Empire or even to dust. 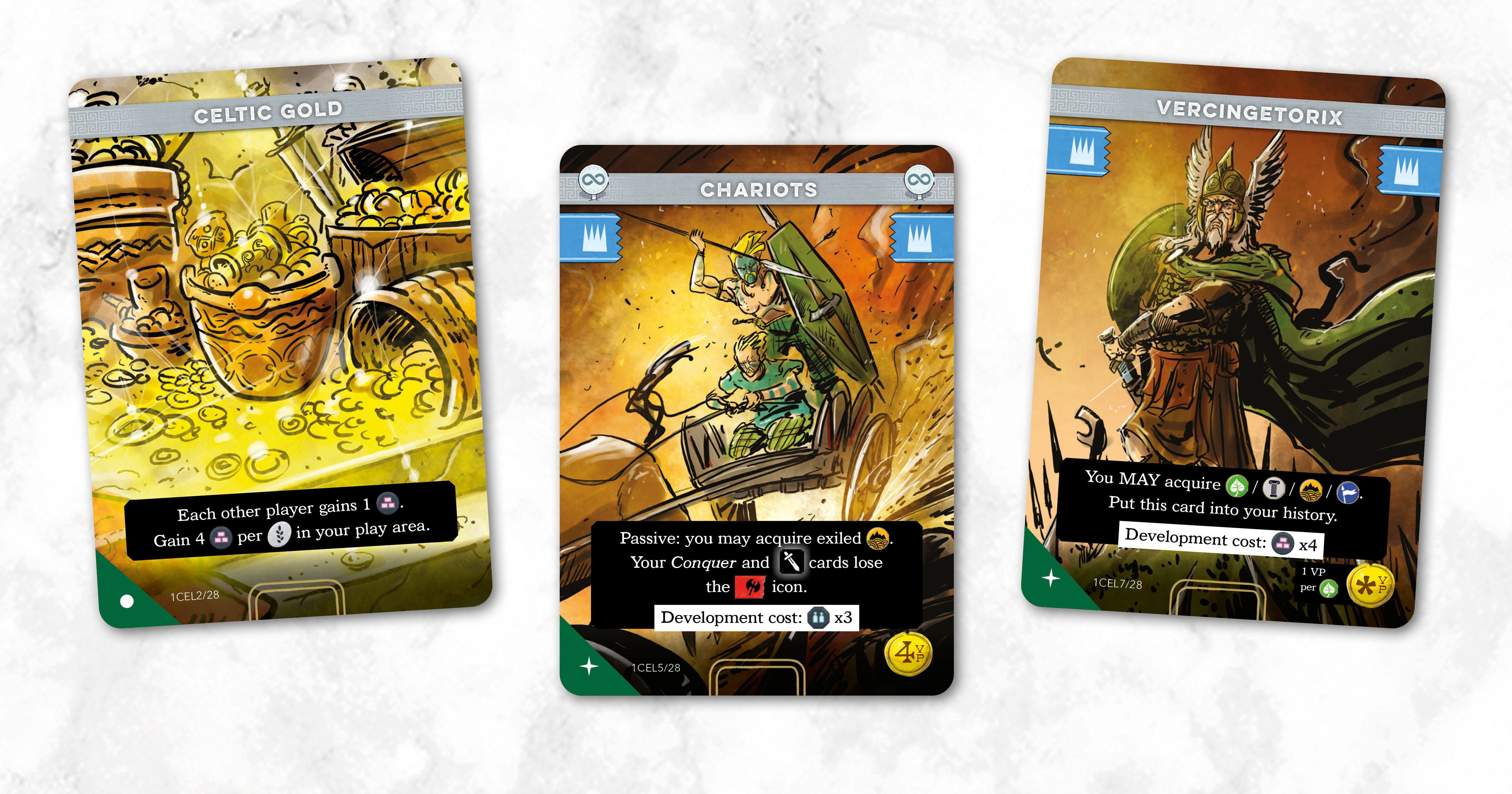 With this spotlight on the Celts it is worth shining a spotlight on unrest too. Unrest represents internal struggles your nation has to deal with: disorder, riots, famine, disease, and so forth. Rather than make these specific or have an event system, we have instead incorporated generic unrest into the game. Unrest is bad! It clogs up your hand and deck with useless cards and each unrest you have at the end of the game loses you two points.

Most nations start with some unrest in their deck to show how much internal stabilisation they need before becoming a durable nation. You might take unrest from opponents’ attack cards, but the majority of unrest you will take is when you acquire market cards. This represents the upheaval and resistance cultures experience with change and new ideas. You can remove unrest by playing it as an action card and paying the cost (either 3 materials, discarding 2 cards, or 1 population). Alternatively, you can spend your entire turn and return all the unrest in your hand for free.This is called a revolution turn, and early game can be a very effective way of cleaning your deck.

There are many cards within the game designed to mitigate unrest – the Celts with their Druids, for example. But beware! If the central unrest pile empties, the world plunges into chaos and the game ends immediately. If that happens, the player with the fewest unrest cards wins, and no other scoring matters. To avoid this happening too easily, civilisations that tend to generate an excessive amount of unrest for others or themselves (like the Celts in this case) come with additional unrest cards to add to the supply when playing with them. 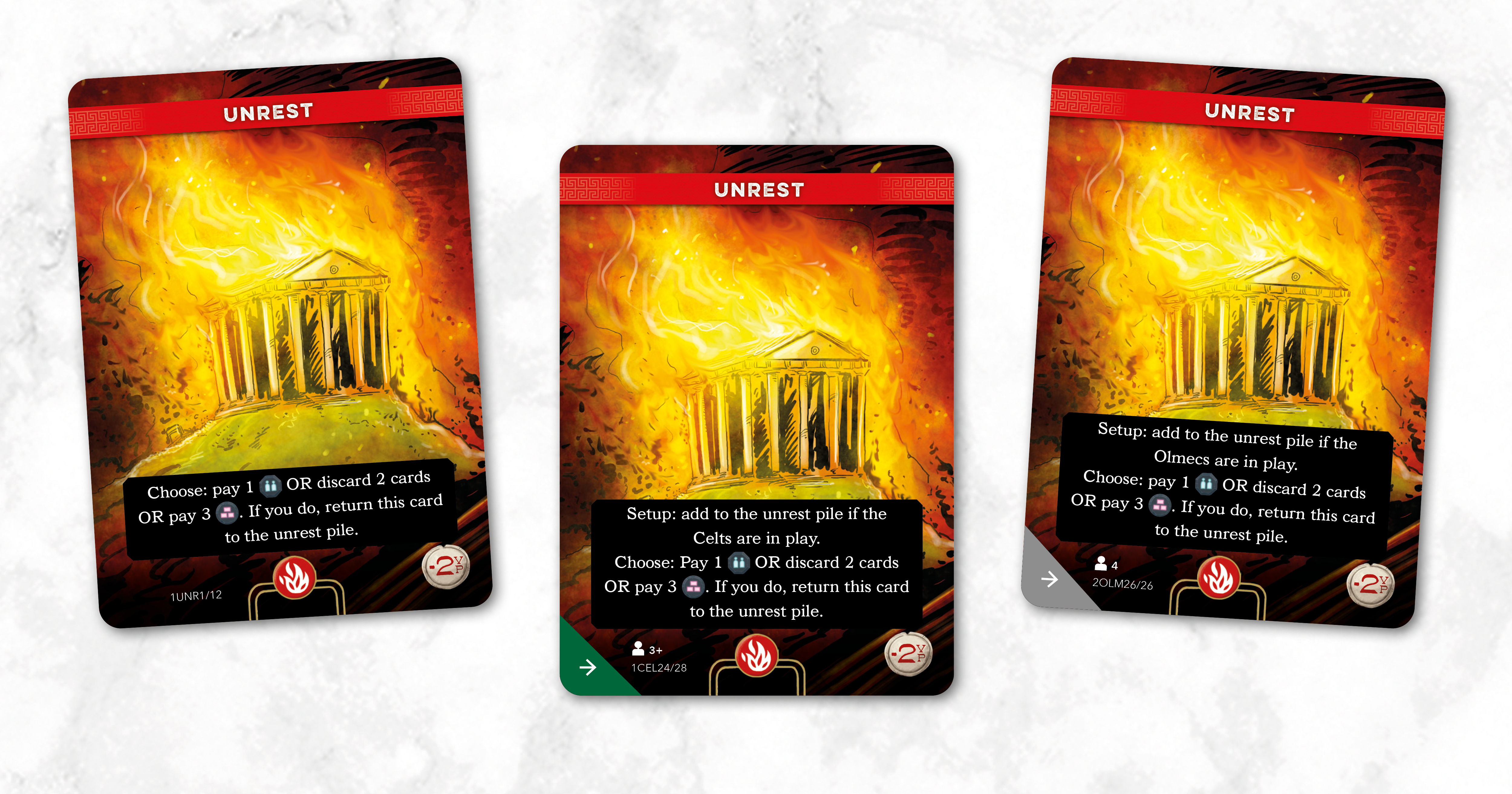 Read more about Imperium on our other spotlight blogs:
The Carthaginians
The Egyptians
The Persians
The Mauryans
The Qin Dynasty
The Romans
The Macedonians
The Minoans
The Olmecs
The Scythians
The Atlanteans
The Arthurians
The Vikings