Today on the blog we’re looking at the lost empire of Atlantis, first mentioned by Plato in around 360 BCE as a legendary state. As a fictional civilisation, we’ve incorporated a number of different ideas about Atlantis, as well as putting our own personal spin on them. 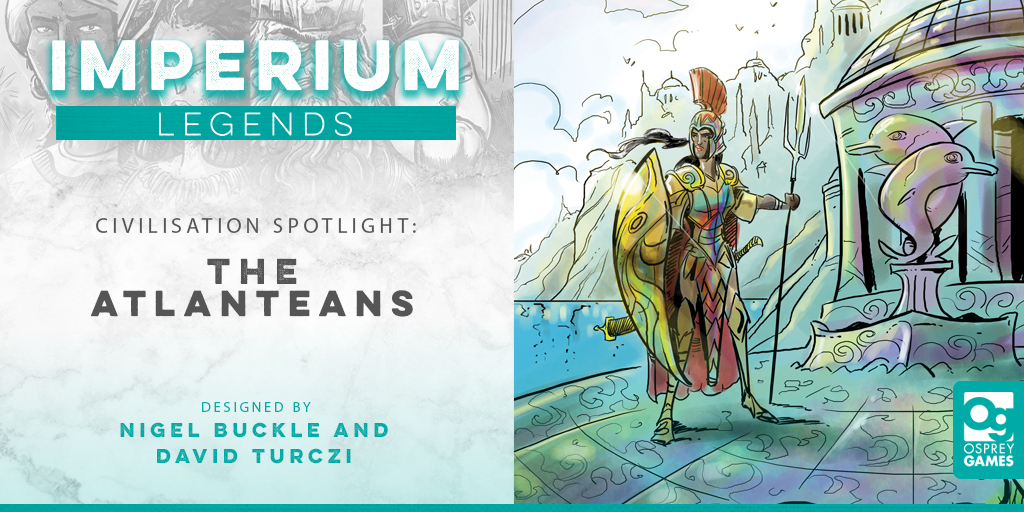 To account for the fact that they are a people of legend from the mythical “Dawn of Time”, the Atlanteans differ from all other civilisations in Imperium in two significant ways. First, they have no history pile, but instead have a sunken pile – their entire civilisation is at risk being flooded! While the sunken pile functions much like another civilisation’s history pile, cards that the Atlantean player would place into their history are instead simply discarded. This means that powerful cards that can usually only be played once per game before being consigned to history, such as the Acclaimed fame card, can be used multiple times to great effect.

Secondly, the ancient Atlanteans start as an empire. This gives you a lot of control over your strategy, as you choose which cards you develop (and when), rather than having to rely on the random order of your nation deck. However, that means that every deck cycle, you will need to find the materials, population, and progress needed to develop the cards you want, or miss out on the opportunity to add these valuable cards to your deck.

The other important advantage of starting as an empire is you can use the powerful cultured cards that appear in the market from the very start of the game. Beware, however, that some nations get a bonus to their attacks on empires. This is especially true if you combine your Legends game with Imperium: Classics, where some of the more aggressive civilisations lay in wait, such as the Celts with their Cattle Raid, covered in an earlier blog post.

Before playing Atlantis, we recommend (even more than usual) that you look through your deck. You will notice sinking is a major aspect of these cards. You have three Flood cards, which serve as your main way of acquiring key cards from the market, but if you use them to sink too many of your starting regions, your Prosperity card won’t be able produce the resources you need in the early game. Another way of gaining market cards is to sink your Atlantean Fleet, but you may find it more useful to use it to attack, and instead sink other cards to keep your deck optimised for rapid cycling. 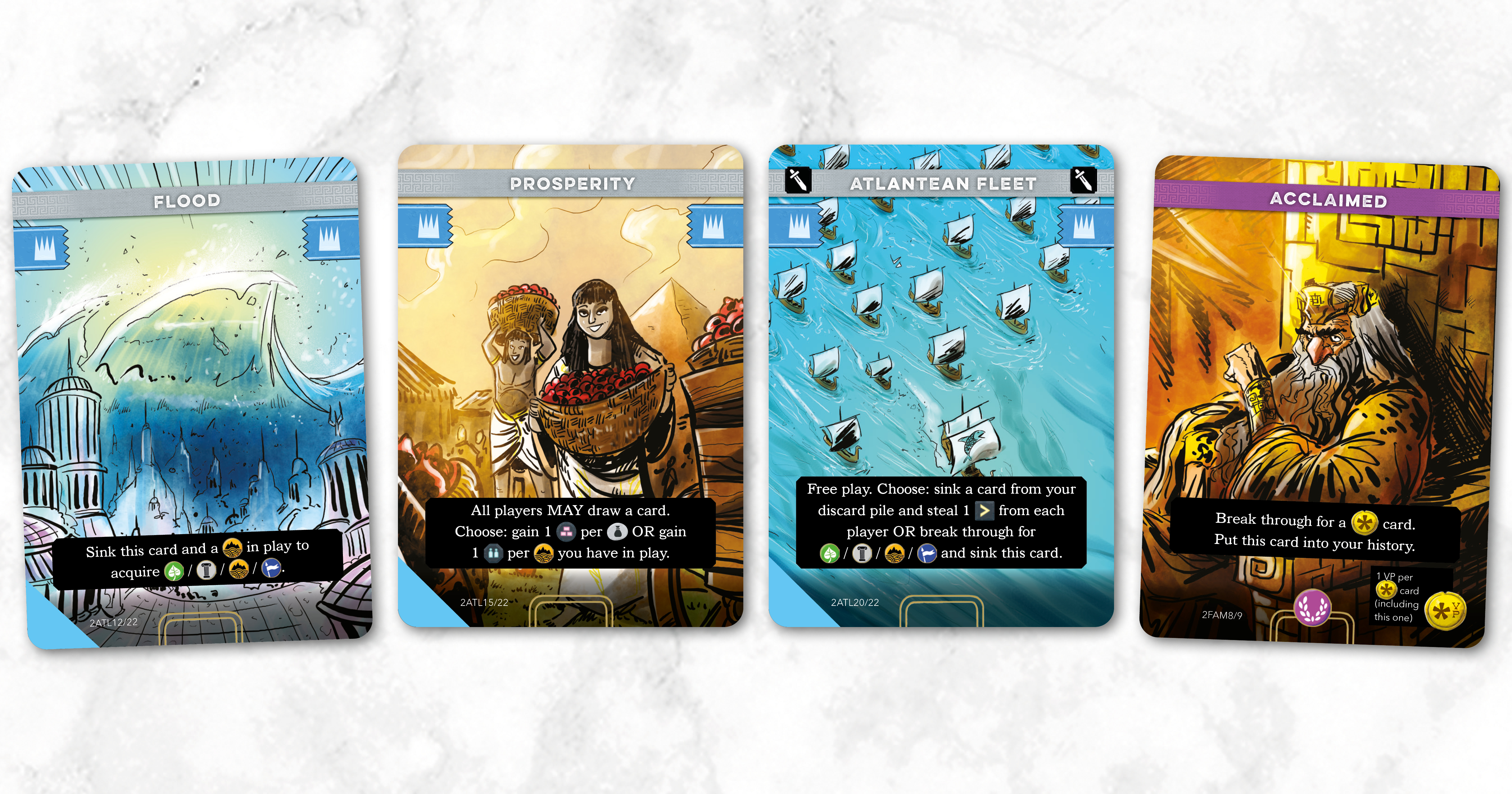 The other utility card you are missing is Glory, which most civilisations rely on to earn fame. As the Atlanteans, you’ll instead need to develop your Myths and Legends, which will let you earn fame at the cost of sinking a region in play. As you can see, between Floods and Myths and Legends, you’ll definitely need more regions! Fortunately regions, such as Themiscyra, are available to develop should the market run dry of, well, dry land.

All your development cards are useful, so it’s probably a good idea to have a priority list and work to have sufficient resources to develop them in the order you want. If you adopt this approach, a strong early option is Vast Wealth, as it provides a discount on your future developments – but only if you are sure you’ll have enough to keep going for a “longer burn” rather than a quick splash before you disappear beneath the waves.

Atlantis’ tools are incredibly powerful, but to soar above your opponents and claim victory, you’ll need to look beyond your own developments to the rest of the world. 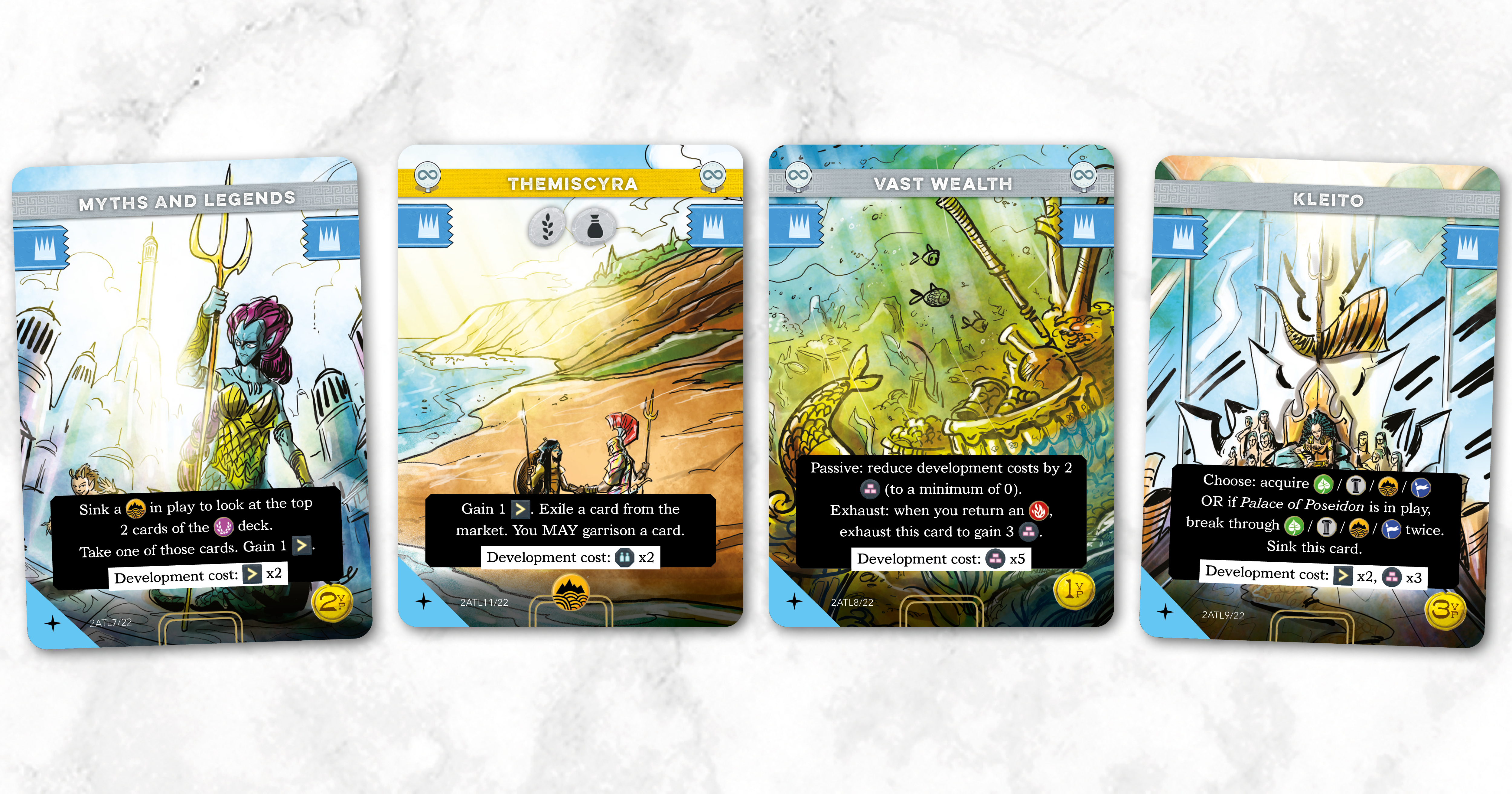