Today on the blog we’re looking at the common cards, those cards not linked to a specific civilisation. While most common cards are different between the two boxes, they are interchangeable, and we’ve included suggestions for how you can incorporate the common cards from each game into the other in the rulebook.

The commons cards are divided into suits, each distinguished by their suit icons as well as the colour of the banner on the top of the card. If you’ve been following our blog posts, some of these will be familiar to you already!

Unrest cards, which we covered in detail in our Celts blog post, represent internal struggles your civilisation faces that will plague your deck. These are identical across the boxes, though you may need to remove some depending on the number of players.

Fame cards, which we covered alongside the Romans, are difficult to acquire replete with potent abilities and high point values. These differ across the boxes, so you can swap them out for more variety. 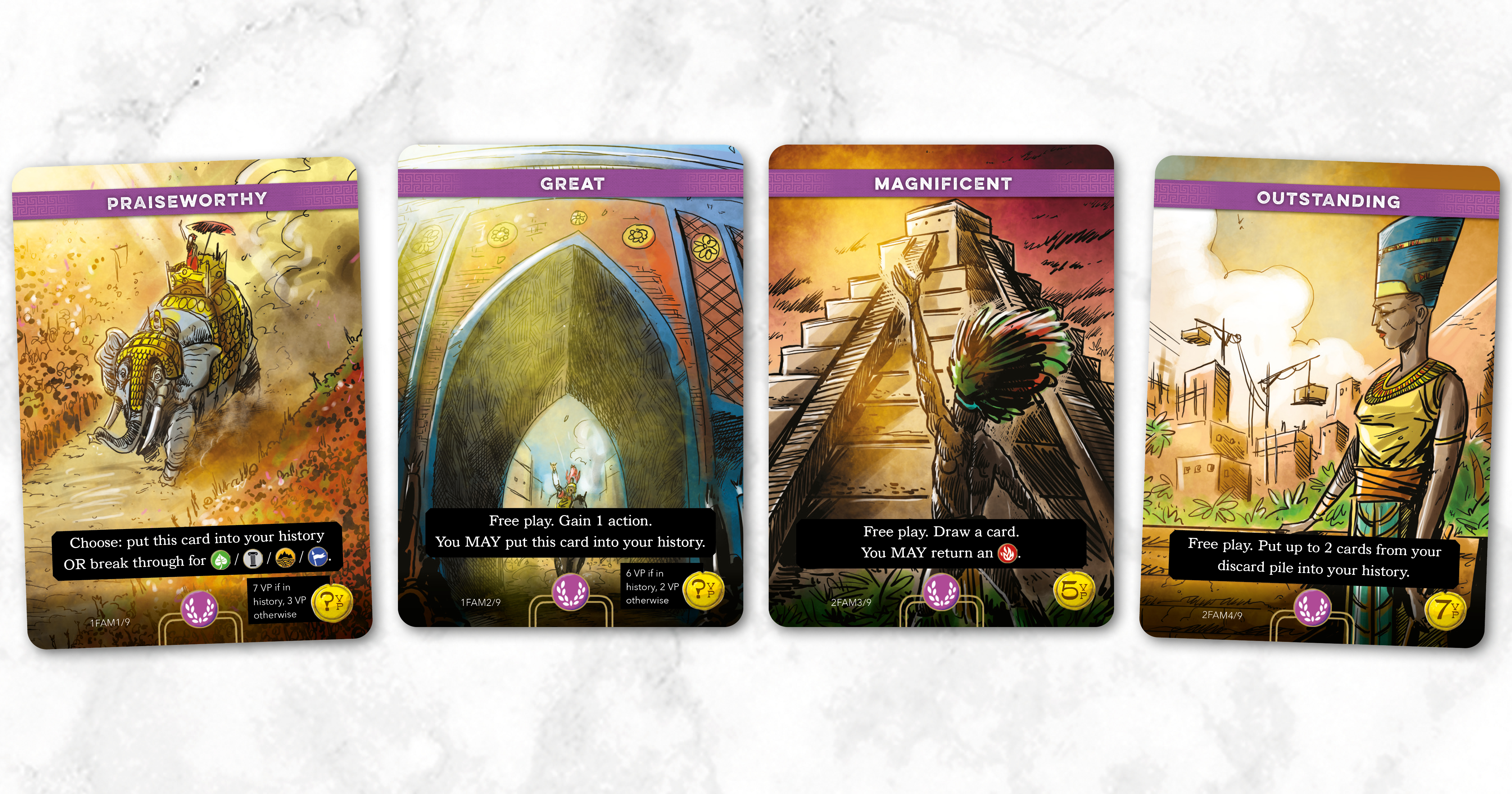 The remaining suits are the cards that form the market. These are:

Most civilisations access cards in the market with their Conquer cards (for region and tributary cards) and their Advance cards (for civilised and uncivilised cards). When you acquire cards from the market, they go to your hand, and you can play them in the same turn (if you have actions remaining), or save them in hand to play in a future turn.

When you acquire a card from the market, you also have to take the unrest card that was placed underneath it – unless it’s a regions. Depending on the card you use, you might instead have the option to break through for a card in the market, though usually at a greater cost. When you do, you can gain a card while avoiding the unrest, or even take an unseen card of the desired suit if you want to chance your luck,

When you set up the market at the start of the game, you’ll divide the common cards by suit, and create separate decks for the region, civilised, and uncivilised cards, with the deck sizes depending on the player count. All the remaining region, civilised, and uncivilised cards, as well as the tributary cards, are shuffled together into a fourth market deck. The market is then formed by drawing from these four decks, guaranteeing that most suits are represented from the start of the game. Each Region card is unique, and you can easily swap them between the boxes for more variety. All civilisations can benefit from more regions for their expansion, and there are many strategies in which you’ll want to amass as many as you can. The fact that acquiring them never comes with any unrest is a welcome bonus!

All Regions are pin cards, so they enter your tableau when played. Almost every region card lets you garrison another card, allowing you to place another card from hand underneath it. This removes it from circulation (but not from scoring) until the region leaves play, so they can be an important tool when managing your deck. 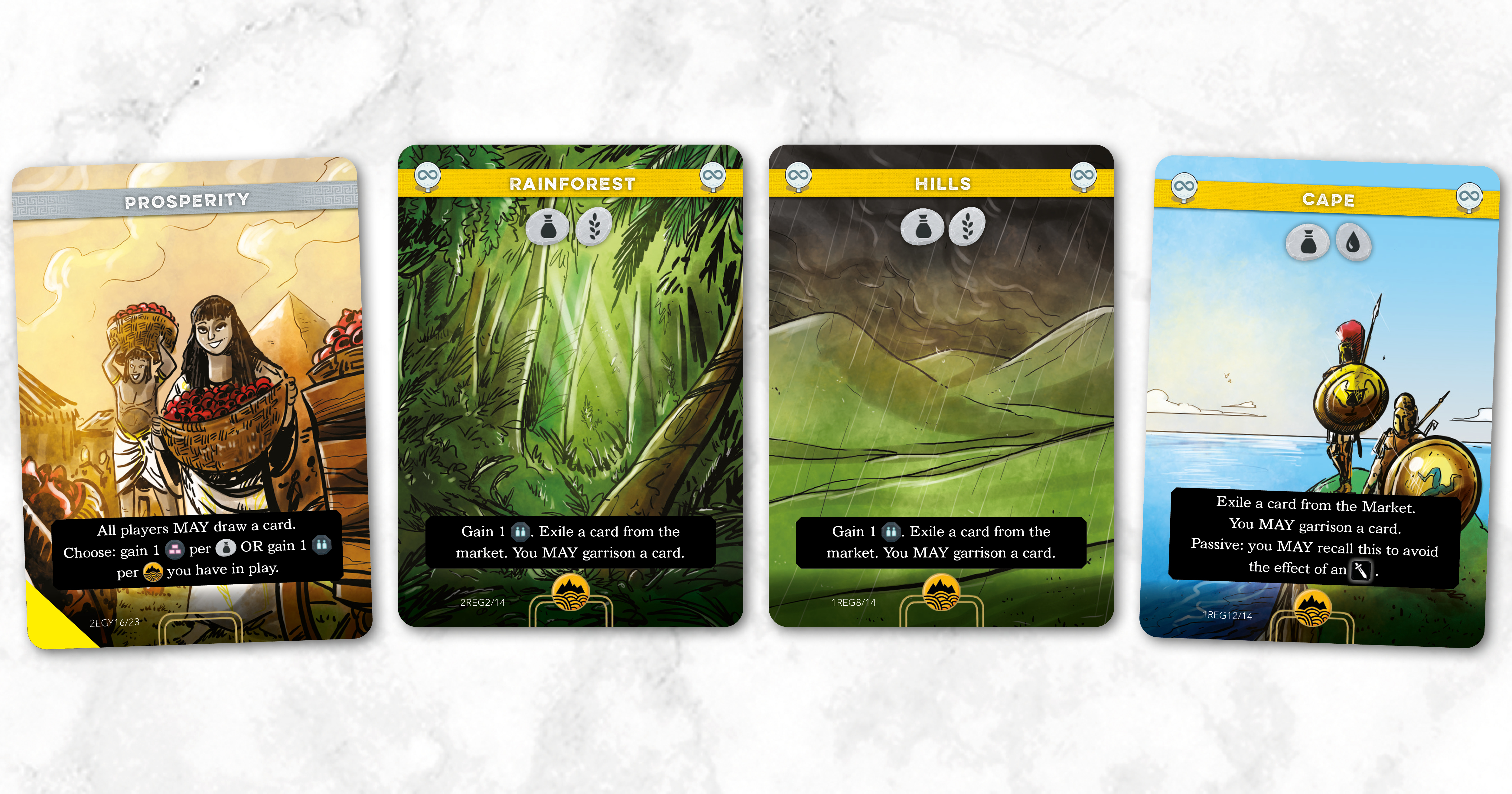 Each Tributary card is unique, so you could easily swap them, too, between boxes. As each box contains a Tributary matching a civilisation from the other box, make sure to replace any duplicates with another tributary (to avoid having the Greeks conquering the Greeks or the like).

Tributary cards represent other cultural groups that are under your civilisation’s control. They are more varied than regions in their play effects and many ‘self-history’, meaning you get one use out of them and then they are placed in your history pile. Typically, common tributary cards score the most points of all the market cards. The tributaries that represent the playable nations have an effect that encompasses one strategy or ability of that civilisation when played by a player. For example, the Roman tributary card can get you a Fame card and the Scythian tributary card provides a defence from attacks. 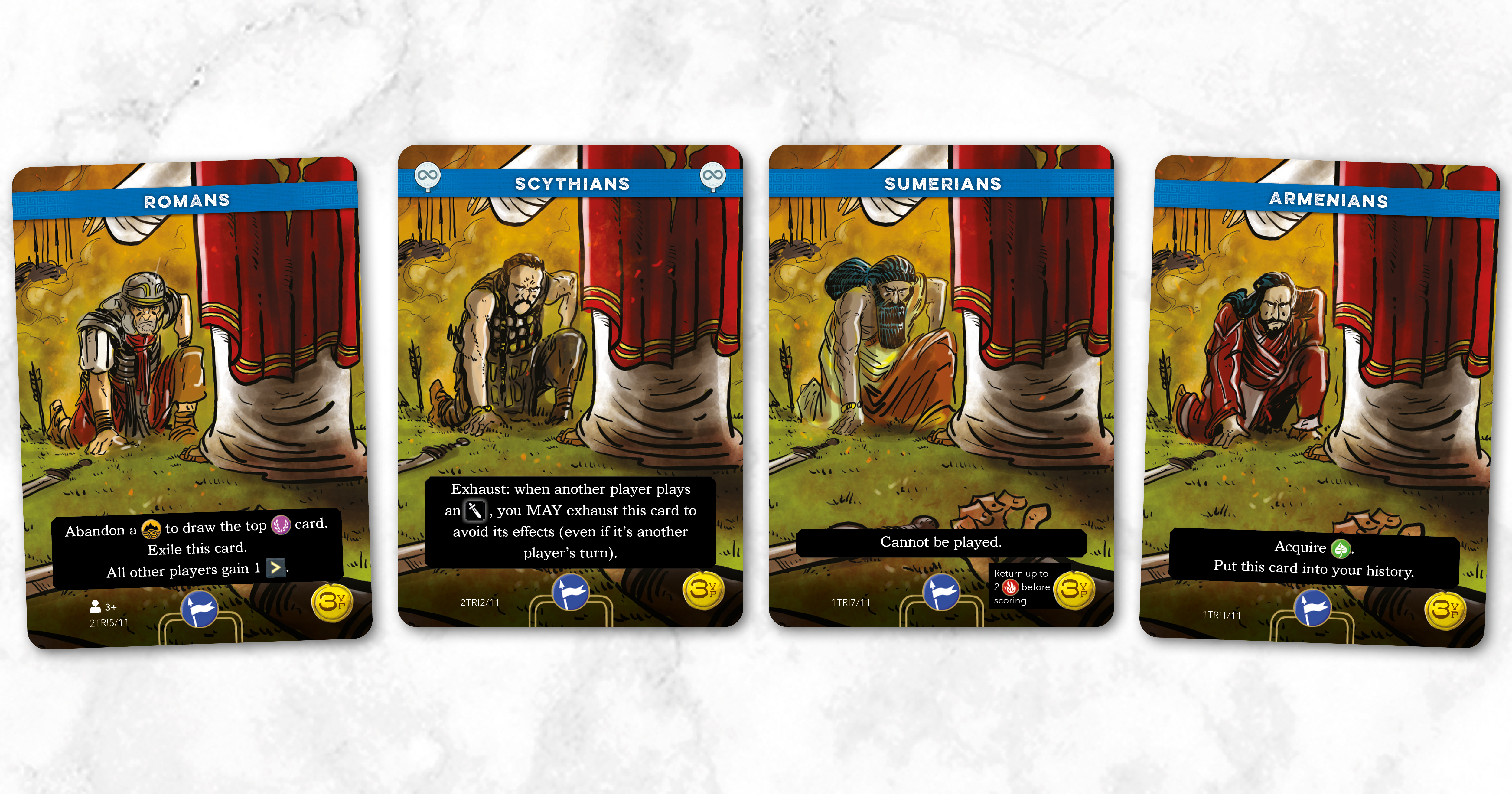 Each game has a set of civilised cards, the majority of these are unique to that box, but some are present in both. It bears repeating: you can swap these out, too, for variety! The civilised cards represent more modern technological and cultural developments (from the view point of antiquity – you will not find steam engines or printing presses in Imperium), and as such they require your civilisation to have become an empire by drawing your accession card. You can acquire a civilised card while you are a barbarian state, but the card will be unplayable until that changes.

Civilised cards typically have powerful game effects, in a similar manner to the development cards of your civilisation, though less specialised. They have a mix of pin cards and action cards, and typically are worth more points than either regions or uncivilised cards. The final set of common cards are the uncivilised cards, which represent ancient technological and cultural developments, although some will be familiar and still in use today (‘uncivilised’ is a crude catch-all). The majority of these cards are also unique, but there is some duplication. Again, you can swap them out!

Uncivilised cards are an early game counterpart to the civilised cards, with a mix of pin and action cards with a range of benefits. While many have the barbarian icon and become unplayable once you become an empire, pinned cards with the icon can still be used for the remainder of the game as long as they stay in play.