The upcoming Combat title, Late Roman Infantryman vs Gothic Warrior is a fascinating read that assesses the Roman and Gothic forces that clashed in three momentous battles at a pivotal moment in the history of the later Roman Empire. In today's blog post, author Murray Dahm explores the deceptiveness of the Gothic leader, Fritiegern. 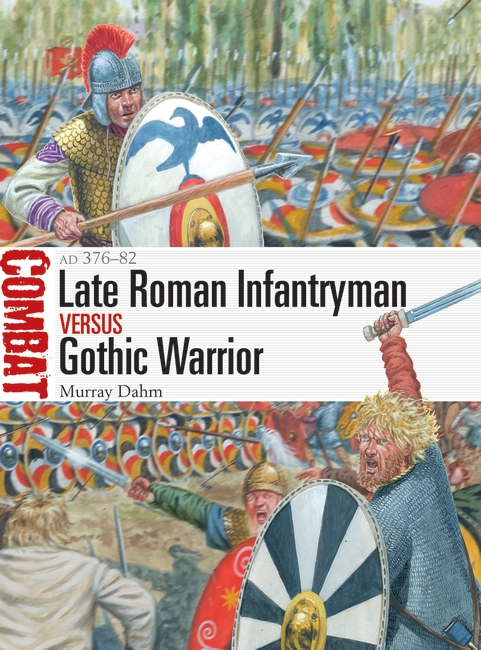 Fritiegern (perhaps based on the Gothic Frithugairns) was the Gothic leader and commander of the victories of the Goths over the Roman empire in the late fourth century AD, at the battles of Marcianopolis in AD 376, the Willows in 377 and, most dramatically and importantly, at Adrianople in 378.

As soon as Fritigern is introduced in Ammianus Marcellinus’ history (31.5.4), it is as a man of cunning. Ammianus describes Fritigern as possessing a natural cleverness and foresight against any eventuality. Jordanes too introduces Fritigern as full of trickery (Getica 136). Despite this introduction, and the several occasions thereafter where Fritigern’s trickiness (and that of the Goths in general) is emphasised, when it came to perhaps his (and their) greatest trick, performed at the battle of Adrianople, Ammianus does not explore the battle in those terms. No ancient source does.  Is it possible Fritigern’s biggest trick has lain undiscovered for 1,600 years?

Fritigern’s first trick occurred almost as soon as he set foot in the Roman empire – he deliberately slowed his march towards Marcianopolis to allow other Gothic tribes to cross into the empire in his wake (the Roman troops were guarding his masses – perhaps 200,000 people – and so the provinces were denuded of troops to stop others’ crossing). His next trick was to follow soon after. Fritigern and the other leader of the Theruingi, Alavivus, were invited to a feast within Marcianopolis (the capital of Moesia Secunda in the diocese of Thrace) by the Roman commander Lupicinus, the comes per Thracias. Inviting the Gothic leaders to a banquet within the city, Lupicinus planned to assassinate them.

The general population of Goths who had been marched from the Danube were not allowed to enter the city to purchase supplies (ensuring the leaders would be alone, perhaps with only a few bodyguards). The Goths, who had been without supplies for some time already (as a result of extortion by corrupt officials, especially Lupicinus and the dux Maximinus (Ammianus 31.4.10-11, Jordanes Getica 134-135)), began to protest and this soon escalated into violence. When some of the Goths were then taken away by force, the violence became more widespread (Ammianus, 31.5.6). According to Ammianus (31.5.7), when he became aware of the unrest outside the city, Fritigern was resourceful or quick-witted (expediti consili) and persuaded Lupicinus to allow him out of the city in order to quell the disturbance. Once allowed out, however, he incited the Goths to continue and gathered more forces. This was tricky indeed but it seems unlikely, however, that Fritigern could have talked his way out of a planned attempt on his life. According to Jordanes’ version of the same event (Getica 136), when Fritigern heard the cries of his guard being slaughtered, with “ears already suspicious,” Fritigern perceived the treachery of Lupicinus and cut his way out with those few followers who remained. He then made his way to his people and incited them to revolt, winning the battle of Marcianopolis against the hapless Roman troops soon after. The Goths then spread out and ravaged the entire region.

At the battle of the Willows (ad Salices) the following year, Gothic trickiness is once again emphasised. Ammianus tells us that the night before the battle, the Romans did not sleep because they suspected some trick by the Goths during the night led by their “insane leaders” (male sanus) (31.7.9) – implying Fritigern himself. No trick came but the Romans expected one. The battle which followed was, at best, a draw although the Romans’ performance was much improved. The Goths, however, remained undefeated. Another victory at Dibaltum followed later in the year but the greatest victory (and perhaps the greatest trick) would come the following year, in AD 378 at Adrianople.

Up to this point, Fritigern’s craftiness is emphasised several times, especially in Ammianus’ narrative (31.5.4, 31.5.7) and Jordanes (Getica 136). There has also been the suggestion of other Gothic tricks and deceit elsewhere such as in the promises made by the Goths before crossing of the Danube and the immediate breaking of those oaths (Eunapius Universal History Fragment 42 and Zosimus New History 4.20.7). It is in the accounts of the battle of Adrianople that this guile and these tricks found their climax, however, and yet no modern commentator has discerned a deliberate Gothic stratagem (or stratagems) at play at Adrianople.

For the most part our sources seek to blame the Emperor Valens and the Roman army for the defeat – they lost, the Goths did not win. And yet, there seems to be several clues that the Romans played into the Goths (and Fritigern’s) hands on several occasions in the lead up to the battle. This was despite a general air of suspicion which Fritigern’s reputation had engendered. When the new Roman commander, the magister militum Sebastianus, came to the walls of the city of Adrianople (Ammianus 31.11.3), he was, at first, refused entry because the men on the walls believed he had been captured by the Goths, gone over to their side, and now intended to cause some harm to the city. Eventually he was recognised and allowed to enter. This trick may have been attempted several times since it is exactly how the Goths intended to take the city later, after the battle of Adrianople (Ammianus 31.15.8). It is possible that just such a trick had been attempted multiple times already.

Valens had come to Constantinople from Antioch and was soon marching out with his entire army to face the Goths. The tricks continued. Coming across a force of Goths after searching for them for three days, Valens was assured by his skirmishers that this body of Goths only numbered 10,000 men (Ammianus, 31.12.3). Ammianus points out, however, that this was a mistake. It seems clear that this number was only a portion of the Goths, not the whole nation on the move, and that the actual number was much greater. The incident also points out that the reconnaissance of the Romans was, at best, incomplete and haphazard, especially if they had only found a portion of the Gothic force in three days of searching.  It also may point out that the Goths were deliberately disguising their numbers, something they would continue to do. Learning that the Goths numbered ‘only’ 10,000 men, Valens determined to attack them at once himself (Ammianus, 31.12.3), and advanced to the city of Adrianople itself. The Gothic wagon laager was spotted, a perfect circle of wagons drawn up on a hill some 12-20 km from the city.

As preparations for Valens’ final advance from the city of Adrianople towards the Gothic wagon laager began, a Christian presbyter arrived from Fritigern (Ammianus, 31.12.8), purportedly sent as an envoy to discuss peace. This was the first of several envoys sent by Fritigern and they have been accepted at face value by historians of the battle. It is entirely possible that Fritigern was once again playing for time and using the multiple envoys to enact some kind of premeditated stratagem. This is certainly in keeping with the description of Fritigern as cunning and crafty and even here Ammianus tells us that Fritigern was “full of craft and every resource of deceit” (31.12.9). Fritigern’s envoy came to the Roman camp and presented a letter requesting that they be given Thrace, and all its crops and flocks, as land to occupy. If this request was granted, the Goths promised “perpetual peace” (Ammianus 31.12.8). At the same time, however, a secret letter was delivered in which Fritigern claimed to look forward to being Valens’ friend and ally – Ammianus claims this was a pretence – but that he, Fritigern, could not control the ferocity of his people unless the emperor, on occasion, showed them an army close at hand (31.12.9). Surely this was a ploy by Fritigern to persuade Valens to advance his army towards the Gothic wagon laager. Fritgern’s letter recalls Themistocles’ message to Xerxes before Salamis in 480 BC (Herodotus 8.75.1-76.1), telling the king that the Greek fleet was considering withdrawing and thereby ensuring that the escape route would be blocked and battle joined – precisely what Themistocles wanted. Fritigern’s letter claimed that such a show of force by Valens would frighten the Goths into submission. Ammianus tells us (31.12.10) that the envoy was dismissed and looked on with suspicion by Valens and yet the Roman army set out on the following morning, 9 August, to do precisely what Fritigern wished. And, with the Roman army marching towards him, Fritigern had yet more tricks up his sleeve.

No ancient account or modern reconstruction of the battle has considered that Valens played into Fritigern’s hands at Adrianople. This is despite that fact that Ammianus records other Gothic stratagems (probably Fritigern’s initiatives (Ammianus 31.15.7–9, also in the Consularia Constantinopolitana entry for the year 378, and on another occasion when the Romans expected a Gothic trick that did not materialize (Ammianus 31.7.5)). During the account of Adrianople in Ammianus, Fritigern’s craftiness is emphasised again (31.12.9, 31.12.14). It is emphasised one last time in the aftermath of the battle outside Perinthus later in 378 (31.16.3). The question which presents itself, therefore, is what trick (or tricks) did Fritigern intend to put into play at Adrianople. The answer might potentially alter the way that the battle and subsequent history is viewed. To find out exactly what Fritigern’s remaining tricks were, you’ll need to read CBT 56 Late Roman Infantryman versus Gothic Warrior, out on June 24th!