On the blog today, author Chris Goss gives a brief overview of the Dornier Do 217, the subject of his new Combat Aircraft title, Dornier Do 217 Units of World War 2. 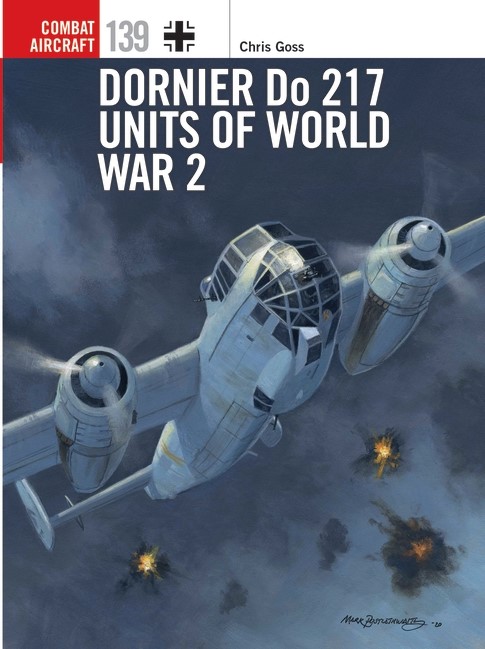 Having written extensively on the Dornier Do 17 including Osprey Combat Aircraft 129 Dornier Do 17 Units of World War 2, I only felt it logical that I should write also about its successor – the Dornier Do 217. Very little has been written on this aircraft which only had an effective combat shelf life of around three years.

Production of the Do 17 finished in October 1940 and the first Do 217s commenced operations in July 1941. From then on, the Do 217 was a regular visitor to the skies over and around the UK albeit initially, RAF fighter pilots thought they were meeting a newer Do 17. It was not until one was captured almost intact in October 1941, after its crew  got lost over the UK and ran out of fuel, that the true identity of the Do 217 was revealed.

Flying with just two bomber units, Kampfgeschwader 2 (KG 2) and II Gruppe of KG 40, for the next two years Do 217 crews fought and died over Great Britain from as far north as Aberdeen to as far west as Cornwall. However, as newer aircraft arrived on operational units, the numbers of Do 217s decreased. First, II./KG 40 converted to the Messerschmitt 410 in June 1943 and then towards the end of 1943, KG 2 began converting to the Ju 188 a Gruppe at a time. So it was that by the Allied invasion of Normandy on 6 June 1944, just a single Gruppe of Do 217s from KG 2 was operational and this then disbanded in September 1944.

Common over the UK, the Do 217 was also found doing other, albeit lesser, tasks on other Fronts. Over Russia, the Do 217 was used for night reconnaissance duties and was still doing this at the war's end. Surprisingly, no Do 217 bomber units were used over the Eastern Front apart from the occasional trials units. However, it was over the Mediterranean that the Do 217 was doing something quite spectacular.

With the development of the Henschel 293 and Fritz X air launched guided bombs, as a result of the delay in the arrival of the Heinkel 177, the Do 217 was used by II and III./KG 100 in launching these against warships with quite spectacular results, including the sinking of the Italian battleship Roma and badly damaging HMS Warspite, a survivor of the Battle of Jutland. Such operations continued until Spring 1944 after which a smaller number of KG 100 Do 217s were active over the Normandy Beaches and out over the Atlantic attacking shipping until August 1944, when KG 100 was withdrawn to Germany.  A few Do 217s carried out the occasional Hs 293 and Fritz X attacks against bridges in 1945 but with little success.

There was one final role for the Do 217 albeit it was only really a stop gap measure. By fitting guns into the nose, something that had been done with a small number of Do 17s and Do 215s, the Do 217 was used as a night fighter. However, due to its weight, it was generally unpopular with the crews who much preferred the Ju 88 or Me 110. A small number of units continued operating the Do 217 until late 1945 but any successes were eclipsed by the other more effective and numerous German night fighters.

It is sad to note that no complete Do 217 exists albeit over the years, the remains of crashed Do 217s have been found and excavated. Writing this book has given me a greater insight to the vital role it played in the air war over England and the sacrifices that so many crews were forced to make.

Order your copy of Dornier Do 217 Units of World War 2 from the website today!