Jackals: Bronze Age Fantasy Roleplaying is the upcoming new addition to the Osprey Roleplaying line from author John-Matthew DeFoggi. On the blog today, J-M will be looking at the clash system!

Hello, again! J-M here, talking about Jackals: Bronze Age Fantasy Roleplaying. Today, we look at the Clash System: where it came from and how it works.

When I first began to develop the Zaharets as a setting, I assumed I would just use it for my OSR campaign. However, once I really started to get into it, I quickly realized I did not like how the d20 system interacted with my world. A d20 game, especially an OSR, has some baked-in assumptions that clash—pun intended—with Jackals’ core themes. So, with a friend’s encouragement, I started to look at other ways I could make a game fit my setting.

Due to a life-long love affair with Glorantha, I knew the simple d100 worked well in a Bronze Age setting; so, I went with Newt Newport’s excellent OpenQuest 2 as the game’s core. It was a great start, but I felt like I needed something more—something to represent the source materials I referenced. In The Iliad, the violence is fast and furious, and—most importantly—back and forth. So, after much math and reflection, the Clash System was born. 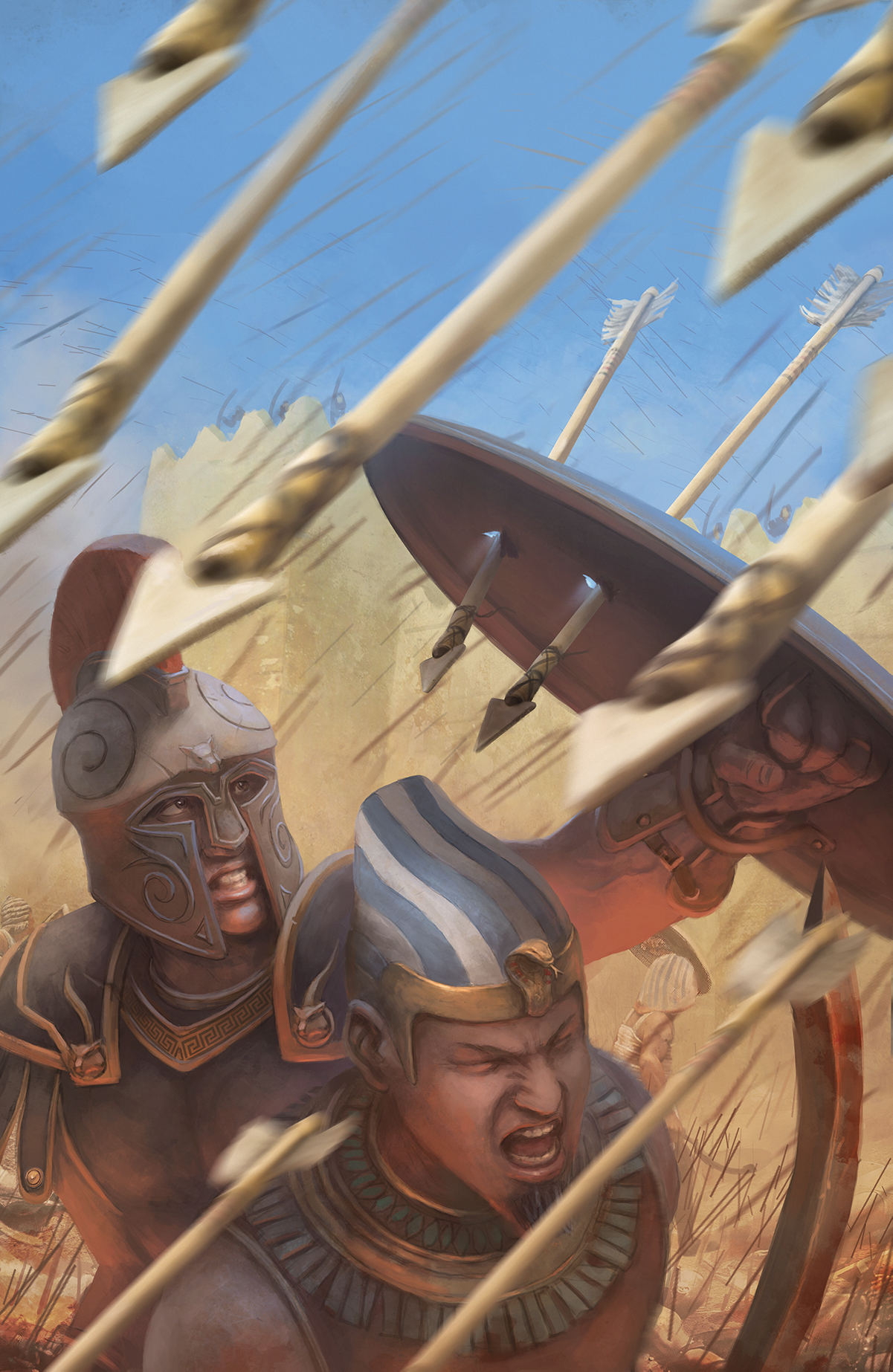 The Clash System is—at its core—a d100 system, in which you want to roll under your skill value. A roll that results in “doubles” (11, 22, 33, 44, 55, 66, 77, 88, 99, or 100) is either a critical success or a fumble. If your character would succeed, they instead critically succeed. If they would fail, they fumble. It’s a simple, fast system. There were two other additions I made to reflect the world of the Zaharets: Clash Points and Valor.

Each character has a derived attribute called Clash Points (CP). The typical character has between 3 and 5 CP. When an enemy attacks, you can spend your character’s CP to react. In essence, you turn your enemy’s attack roll into an opposed roll. Whoever rolls highest without going over their skill value wins the clash and inflicts damage. Yes, this means you can slay an opponent on their turn, and they can damage you on yours! If your character has no remaining CP, there is no opposed or defense roll, they just take the hit. Thus, conserving CP for the right moment is vital. There are also ways to spend CP on your turn and reduce your opponent’s CP reserves. Remember, CP are a renewable resource! They always return at the start of your turn.

Throughout my time playtesting, I’ve found Clash Points and the Clash System make for interesting and dynamic combat. One side effect of this is the mutual death rule (or the Trisha rule). When you spend a CP in combat and roll a critical success, you win. In previous iterations of the rules, the highest critical success won the roll; however, my wife pointed out how much it sucked for the table for someone to roll a critical success and still fail. So, a friend and I hashed out the details of the mutual death rule while on a drive. If both players roll critical successes during an attack, they both hit… and they both ignore armor. This rule is very thematic to the source material, with the chance for both opponents to die on the ends of opposing spears.

The other rule I developed later in playtests was the interaction between Mettle, Valor, and Wounds. Mettle is your character’s reserve of energy and spirit. Poisons, exertion, and traveling can reduce a Jackal’s Mettle. Mettle factors into Valor—your character’s fighting spirit. Characters take damage to Valor, first, but it also returns quickly. If a character can take a breath or rest for 5 minutes, they get their Valor back after a fight. (Beware: Some monsters can sap a Jackal’s Valor just by being near them!) Once your character’s Valor is gone, they start taking Wounds, which can kill them. The more Wounds your character loses, the less Valor they have in the next fight. The interplay between CP, Mettle, Valor, and Wounds gave Jackals the feel I wanted.

Additionally, it had the unexpected effect of playing into the war accounts of the ANE. In those records, it always seems the person recording inflated enemy numbers. By restricting the number of CP a threat (enemy) possesses, I was able to build the system so the heroes are often outnumbered, but can still hold their own—and even survive to become the heroes of legend all Jackals aspire to be.

In the next and final article, I’ll discuss some ways to approach Jackals as a Loremaster.