In today's blog post, we're looking at three fantastic pieces of artwork from three of our August 2021 titles. Let us know what you think in the comments section and, if you would like to see any artwork from any of our September titles, be sure to mention that too! 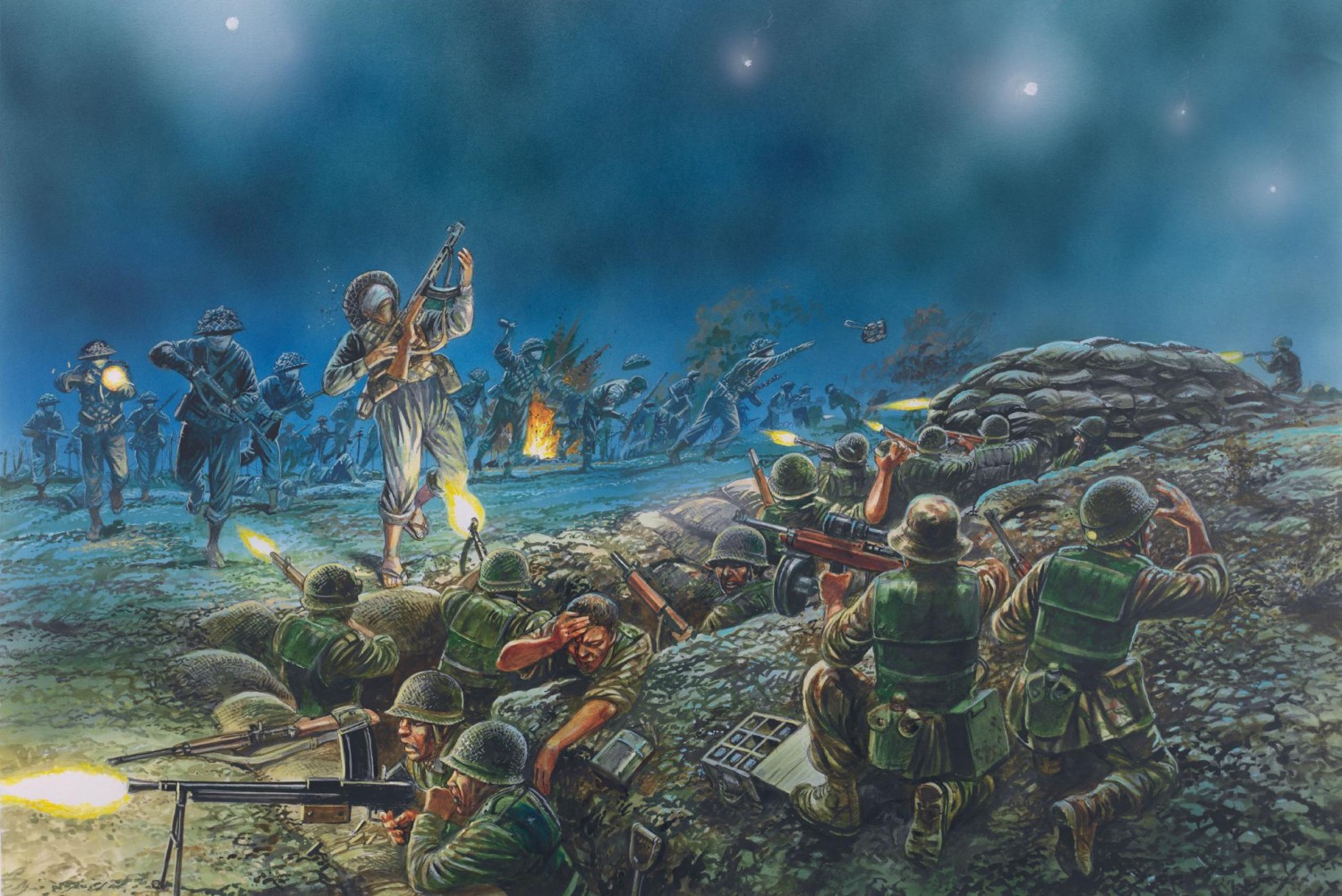 This illustration here, requested by PAUL W and KAL9000, depicts the final defence of Eliane 1 by 1/II/1 RCP on 1 May 1954. The assault was made by two battalions, 439th from 98th Regt and 888th from 176th Regt. When it began at about 2020hrs, following a short bombardment, Eliane 1 was held by Lt. Périou's 1/II/1 RCP (the battalion's former 22 CIPLE before integration in October 1953). From its 114 all ranks, only 17 (not including Yves Périou) survived the action and the subsequent withdrawal to Eliane 4. They were reinforced first by Lt. Leguére's 80-strong 3rd/4th Co (merged since 12 April), which was reduced to 25 men during this action, and at 2200hrs by part of Capt. Cledic's 2nd Co. Although pushed back from the summit to the reverse slope, the paras continued to resist for several hours before the survivors were ordered to withdraw over the saddle to Eliane 4, and Eliane 1 was recorded as lost at 0200hrs. 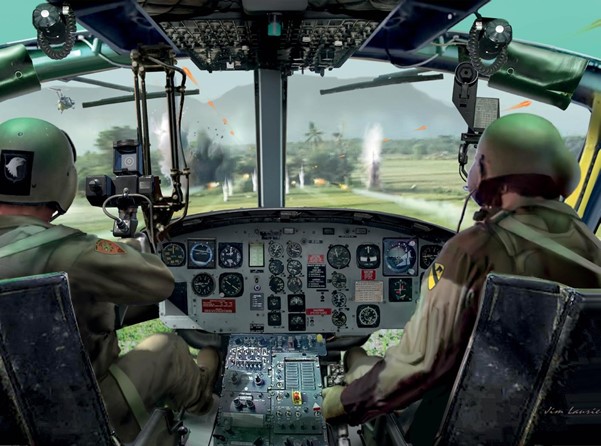 When in the fixed forward position, the UH-1C's rockets and miniguns were fired via the XM60 reflex sight system mounted above the right seat (pilot) windshield. The co-pilot (left seat) could also shoot them using the XM6 sight on the swing-down mechanical arm stowed above his windshield. He could also operate the miniguns in the “flexible” aiming mode. The XM6 sight had a standard “pipper” that was slaved to the miniguns, which were moved electrically in order to hit the target chosen by placing the “pipper” on it. The GAU-2/A six-barrel miniguns were set to fire at 2,400 rounds per minute – 80 rounds per second. A 2.75in. rocket, with a 17lb warhead, had a similar shock effect to a 110mm artillery shell. 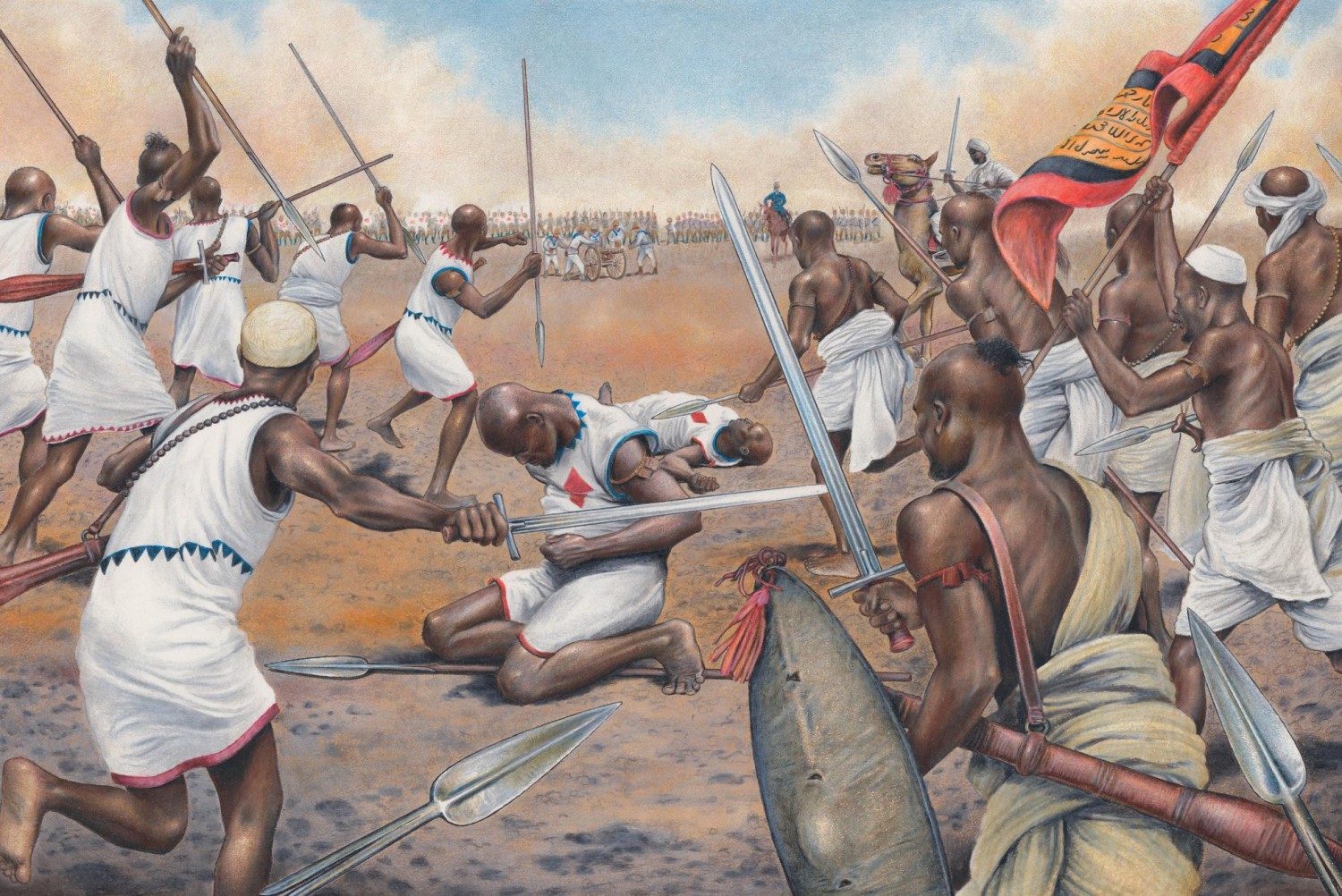 This final image shows the Mahdist attack at Abu Klea. At the start of the battle of Abu Klea, the Mahdists launch a determined attack on the British square from the cover of a shallow gully. On the right are a detachment of ansar wearing the traditional robes of many of the Sudanese Arab groups, and carrying the swords and spears that were the mainstay of Mahdist shock-troops; the man in the foreground is carrying a hide shield of the type used by some of the Nile tribes. They are led by a mounted amir and his standard-bearer; the standard is typical of Mahdist banners, bearing an inscription extolling the Mahdi's place as the successor to the Prophet Mohammed. To the left are a group wearing one of the early forms of the jibbeh, the robe the Mahdi prescribed for his followers; this early pattern was sleeveless and decorated with limited colour patches and edging.