On the blog today, Robert Lyman, author of recent title A War of Empires takes us through the untold story of the war against the Japanese in the East and how history has so far ignored the contribution of the Indian Army. 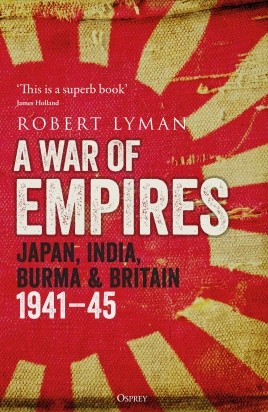 ‘What more can be said about the war against the Japanese?' I was asked recently. A considerable amount, in fact. The war against the Japanese in the Far Eastern theatre of war – what the Americans call the China-Burma-India theatre – remains remarkably under-researched. There are vast swathes of research on its various aspects that have never been explored. Work that is plentiful in respect of other Allied armies during the war is sparse when it comes to the Far East. No one, for instance, has studied the make up and composition of HQ 14 Army, pulled apart its files and constructed a picture of the arguments and decisions that mark the extraordinary history of this most allied of formations from its raising in late 1943 to its demise, following the reconquest of Burma and the defeat of the Japanese, two years later. There is very little scholarship on the English operations of the Chinese armies and on Japanese operations. Likewise, there is much that remains to be said about the detail of Allied operations at all, over and above that provided by the Official Histories. During my visits to the National Archives in Kew I regularly underdo bundles of dusty papers that have never been opened since they were first tied up at the end of the war.

In the West we retain a very western-centric view of the war, looking at its strategies and operations through (mainly) British and American eyes. Little effort is expended to understand the perspective of China’s, or indeed of occupied Burma. Our view of Chiang Kai-shek is almost certainly too jaundiced in favour of Stilwell’s view that the man he called ‘The Peanut’ was a grasping egotist concerned only for personal power. The alternative view, that he was responsible for holding down a significant part of the Imperial Japanese Army, thus making the Japanese invasion of South East Asia in 1941 inevitable, and its defeat certain, is rarely acknowledged. Equally, in India and Pakistan little is allowed to get in the way of favoured narratives that position the war as a colonial enterprise and of no significant interest in the national story. In Japan, too, few scholars have done anything to uncover its story from these years, although interest in it is growing. Large numbers of Japanese now visit Manipur and Burma to retrace the paths trodden by their forebears, and a national television documentary on the battle of Imphal to which I contributed three years ago was watched in very large numbers by a modern Japanese population which knows virtually nothing of the war.

Those of us who know something of the war have also inherited, or have allowed to develop, slightly skewed memories of it. We don’t have enough respect for the fact that the vast bulk of the fighting troops on the Allied side were Indian and that there were about as many Africans fighting in Burma as there were Britons. We might remember the Chindits for their bravery and stamina, but we haven’t really applied our critical faculties to an examination of the effect – or not – Wingate’s expeditions had on the outcome of the war. Likewise our collective memory of the battle of Kohima tells us that the siege was resisted by 450 brave men of the Royal West Kents, who held off Sato’s 31st Division for nearly three weeks. Brave they certainly were, but we have forgotten, if we ever knew, that seventy percent of the 1,500 defenders were men of the 47th Rajputs, the Assam Rifles and the remarkable Assam Regiment, which had already held up two of Sato’s columns for 4-days at Jessami and Kharasom. The victors in this stupendous struggle were Indian as well as British, but too few of the accounts of the battle discuss the men of the 161 Indian Infantry Brigade or of the 7th Indian Division. We know little if anything of the men of the Kachin Levies and the Kachin Rangers who made Stilwell’s advance to Myitkyina in 1944 successful, or of the Karen irregulars, raised by men of SOE, who stopped the Japanese defending Toungoo in March and April 1945, allowing Slim to push his army down to Rangoon. In this battle, the Karen irregulars killed more Japanese than those of the conventional forces driving down from the north. Similarly, few know that for a full nine months the men of the 81st West African Brigade (reinforced by a brigade of the 82nd – the other brigade had become Chindits) forced the Japanese defenders of Akyab in Arakan to withdraw into central Burma in early 1945, allowing for an unopposed amphibious assault against the capital of Arakan. These African troops – now almost entirely forgotten in the history of the war – had, in my view, far more effect on the outcome than the Chindits.

History, after all, is what we are told, and what we are told is largely the product of who tells it, and why. What we know of the war in the Far East simply isn’t the full story. It was for this reason that three years ago I sat down to write A War of Empires. Using thirty years of teaching experience, reading and research, I have carefully reconstructed the story to tell what I believe is a more balanced account of the Longest War than perhaps we’ve received to date. My book, though, is a drop in the ocean. There is so much more to be said. I hope that A War of Empires prompts a much wider and deeper conversation – especially in India, Pakistan and Bangladesh – than has hitherto been the case.

Order your copy of A War of Empires here to learn more about this forgotten history.