Today marks the 550th anniversary of the Battle of Tewkesbury, one of the defining conflicts of the Wars of the Roses. To commemorate this anniversary, we look back at some of the battles and skirmishes from across the Wars.

On a bitterly cold Palm Sunday, 29 March 1461, the army of King Edward IV met that of his Lancastrian enemies on a snow-covered battlefield south of the village of Towton in Yorkshire. The struggle lasted all day in the longest and bloodiest battle of the Wars of the Roses. With the arrival of Yorkist reinforcements under the Duke of Norfolk, the Lancastrian line eventually broke and their troops fled, many being caught and slaughtered in the death trap known as ‘Bloody Meadow'. 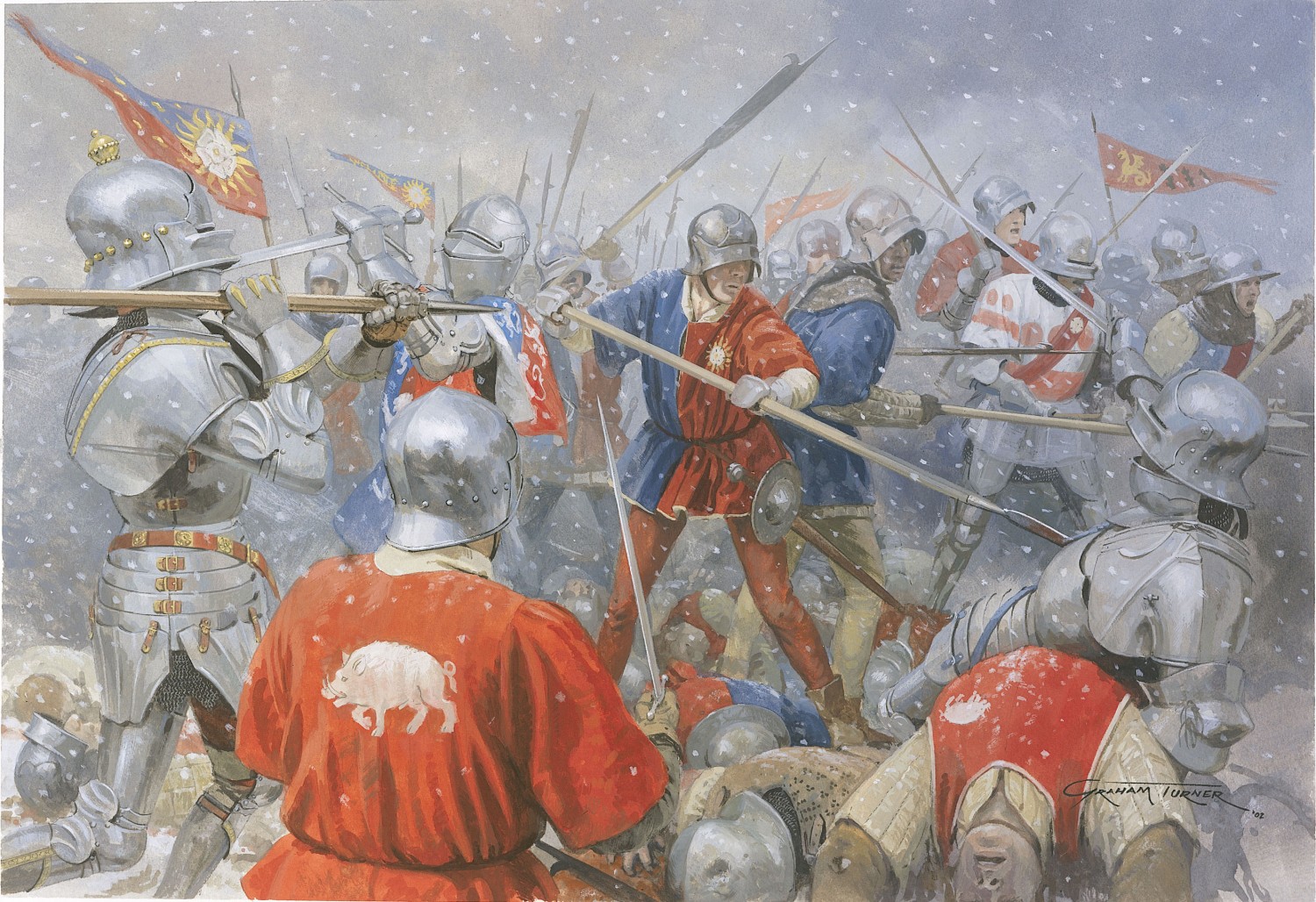 (Artwork by Graham Turner from CAM 120: Towton 1461 by Christopher Gravett)

Here, the melee at Towton is shown. The snow at Towton made the struggle doubly bitter. After the initial barrage of arrows, the main battle developed between the long lines of men-at-arms, a mixture of richer individuals in full plate armour and others in varying amounts of less expensive equipment. Men stood close alongside their fellow retainers, both for protection and moral support, as comrades fought under the eyes of their friends. In the front ranks of the Lancastrian line, retainers of the Earl of Devon, distinguished by their white boar badges, strive to push back the Yorkists opposing them.

After the crushing Yorkist victory at Towton in 1461, King Edward IV appeared to have triumphed in England's bloody Wars of the Roses. The Lancastrian King Henry VI was even a prisoner in the Tower of London. By 1470, however, Edward's erstwhile ally the Earl of Warwick - The ‘Kingmaker' - had joined the Lancastrians and a final reckoning was inevitable. Warwick perished at Barnet in April 1471, and on 4 May Edward confronted his enemies, including Edward, Prince and last hope of the House of Lancaster, at Tewkesbury. 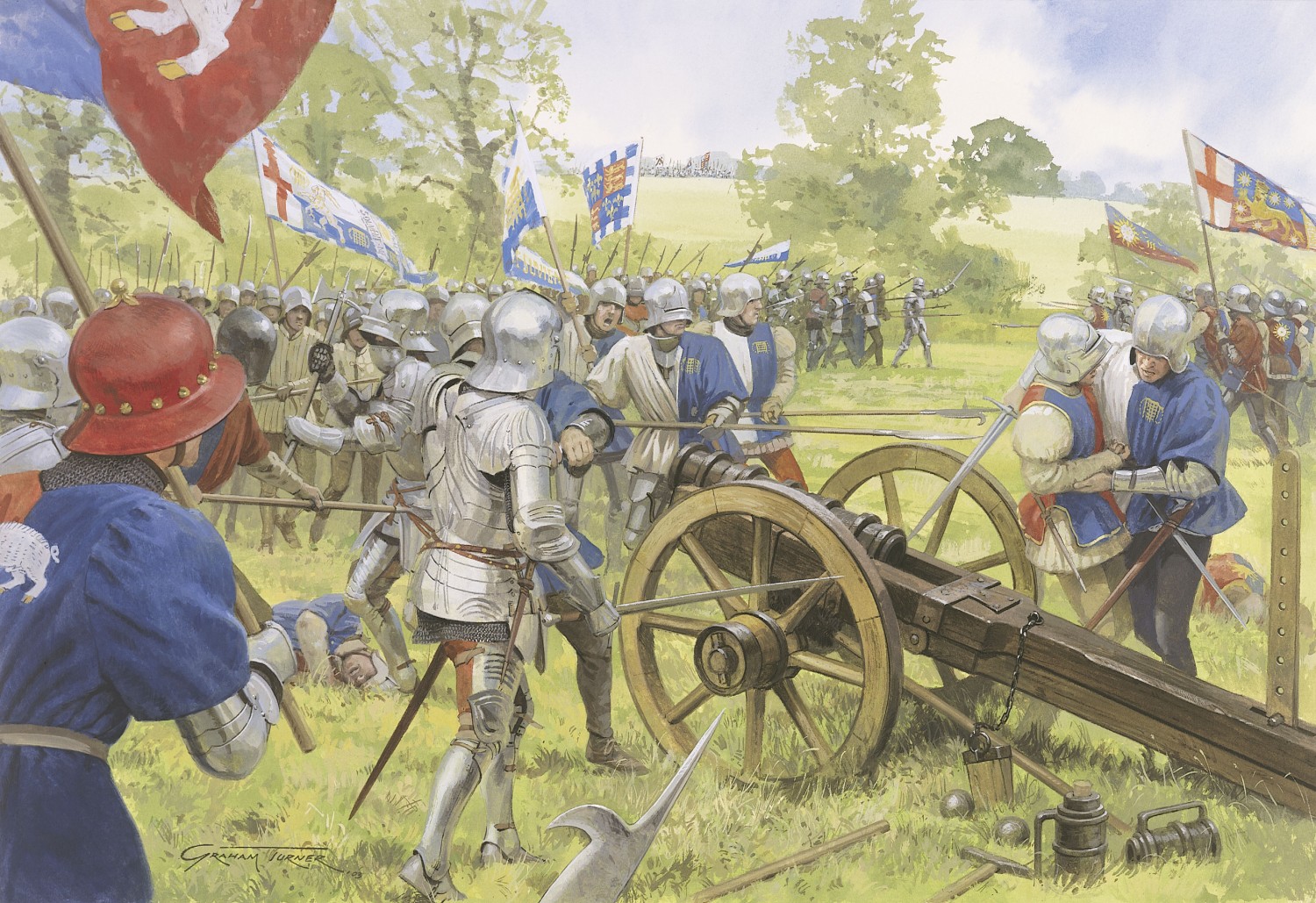 (Artwork by Graham Turner from CAM 131: Tewkesbury 1471 by Christopher Gravett)

This illustration depicts Edmund, Duke of Somerset, launching his attack on the Yorkists and passing over the track lined by hedges, trees and ditches as his men come to grips with the Yorkists. The attack may have been prompted by the desire to silence the Yorkist guns and to beat back their archers, who seem to have outnumbered the Lancastrians.

The battle of Bosworth was the culmination of the War of the Roses, the dynastic struggle between the houses of York and Lancaster that dominated England in the second half of the 15th century. Edward IV had secured the throne for the house of York, but his early death in 1483, followed by the death of his sons and the taking of the throne by his brother, Richard of York, saw a renewed outbreak of fighting. His reign began with a major rebellion and was dogged by rumours of his involvement in murder, with Richard facing threats not only from the lords he alienated but also the Lancastrian faction waiting in the wings. Henry Tudor eventually decided to take the huge risk of attempting to seize the throne and Richard's army marched to meet him, finally clashing near Market Bosworth. 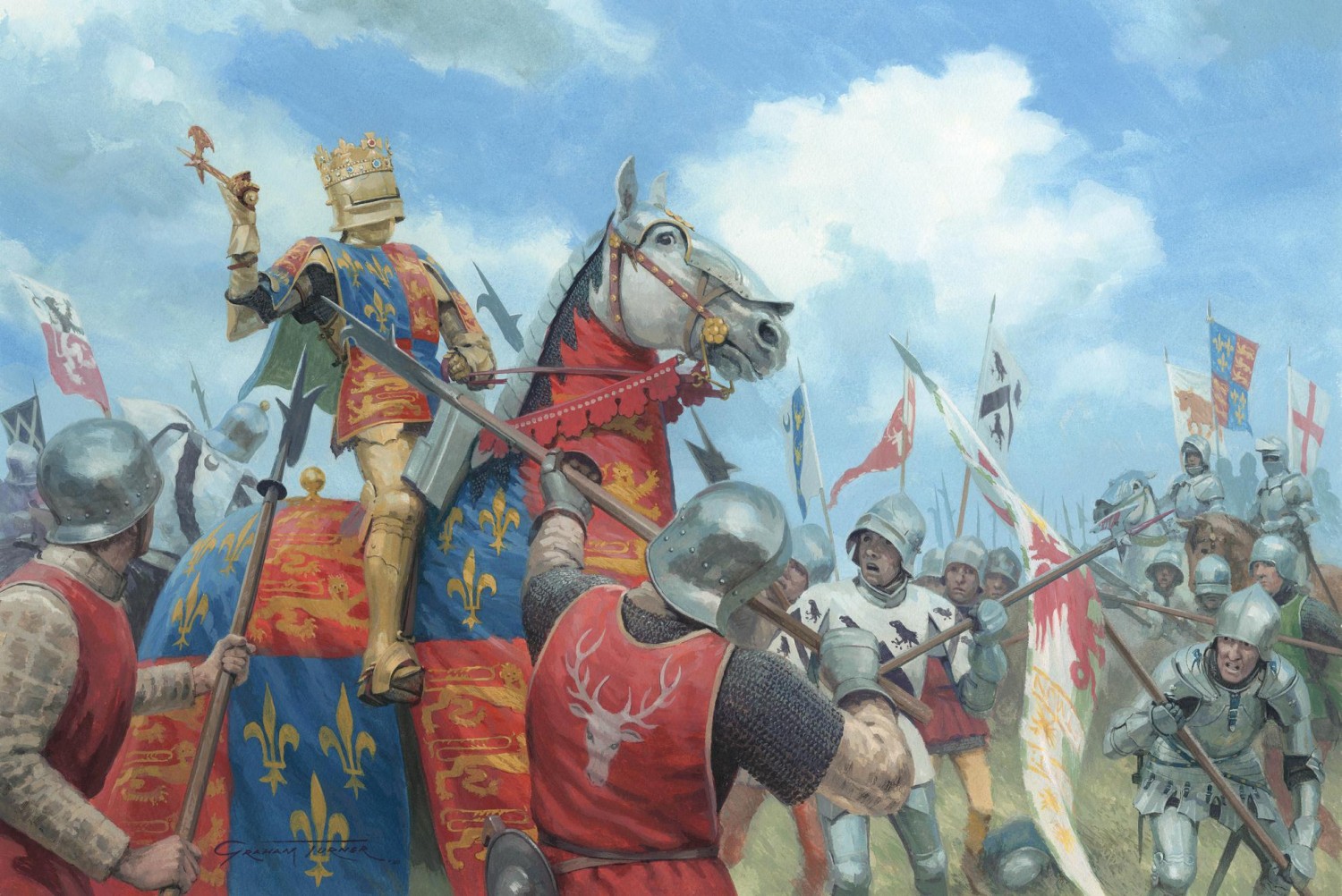 (Artwork by Graham Turner from CAM 360: Bosworth 1485 by Christopher Gravett)

Having killed Henry Tudor's standard bearer and felled Sir John Cheyne, King Richard, depicted above, is now attacked by Sir William Stanley's red-jacketed retainers with their hart's head badge, who have swarmed across the field to assist Henry. Resplendent in gilded armour and wearing a rich coronet around his sallet, Richard now endeavours to hack his way clear with his battleaxe. The fret on Sir James Harrington's banner and the lion of Sir Robert Percy mark out his desperate followers as Sir Richard Ratcliffe is pulled from his horse. Rhys ap Thomas, wearing his arms of three black ravens, raises a pollaxe against King Richard while a Welsh halberdier closes in. Rhys Fawr ap Maredudd picks up the fallen red dragon standard. Soldiers of his French bodyguard close round Henry, who asserts his claim to the throne with a royal banner as well as those of St George and the Dun Cow of Warwick.

Order your copy of each title to read more:

Graham Turner has designed eight new stamps featuring stunning illustrations from these battles and more from the Wars. Click here to see them and to pre-order your favourites.