Napoleon Bonaparte is renowned as one of the great military commanders in history, and the central figure in so many of the events of the French Revolutionary and Napoleonic wars. Throughout the first decade of the 19th century he won battle after battle by wielding the Grande Armée decisively against the other powers of Europe. Yet his fortunes changed in 1812 when the invasion of Russia wrecked his forces, and Napoleon suffered his final defeat at Waterloo in 1815. Following his crushing loss, he was exiled to the remote island of Saint Helena where he died on 5 May 1821. To commemorate this bicentenary, we've pulled up some artwork from a few of his campaigns.

Having returned from Egypt and seized power as First Consul, Napoleon led the Army of the Reserve against the Austrian Army besieging Genoa. After a period of skirmishing and manoeuvring, Melas, the Austrian commander, launched a surprise attack on the morning of 14 June. The attack initially drove the French back to Marengo village and, despite committing the Consular Guard, by 3pm the French were retreating. Believing he had won, the wounded Melas left the field to his Chief-of-Staff, Zach. The timely arrival of Desaix's Division led by Kellerman's cavalry and the 9e Légère threw the Austrians into confusion, turned the battle in Napoleon's favour, thus securing his position as First Consul. Here, the first Austrian attack on Marengo village is depicted. 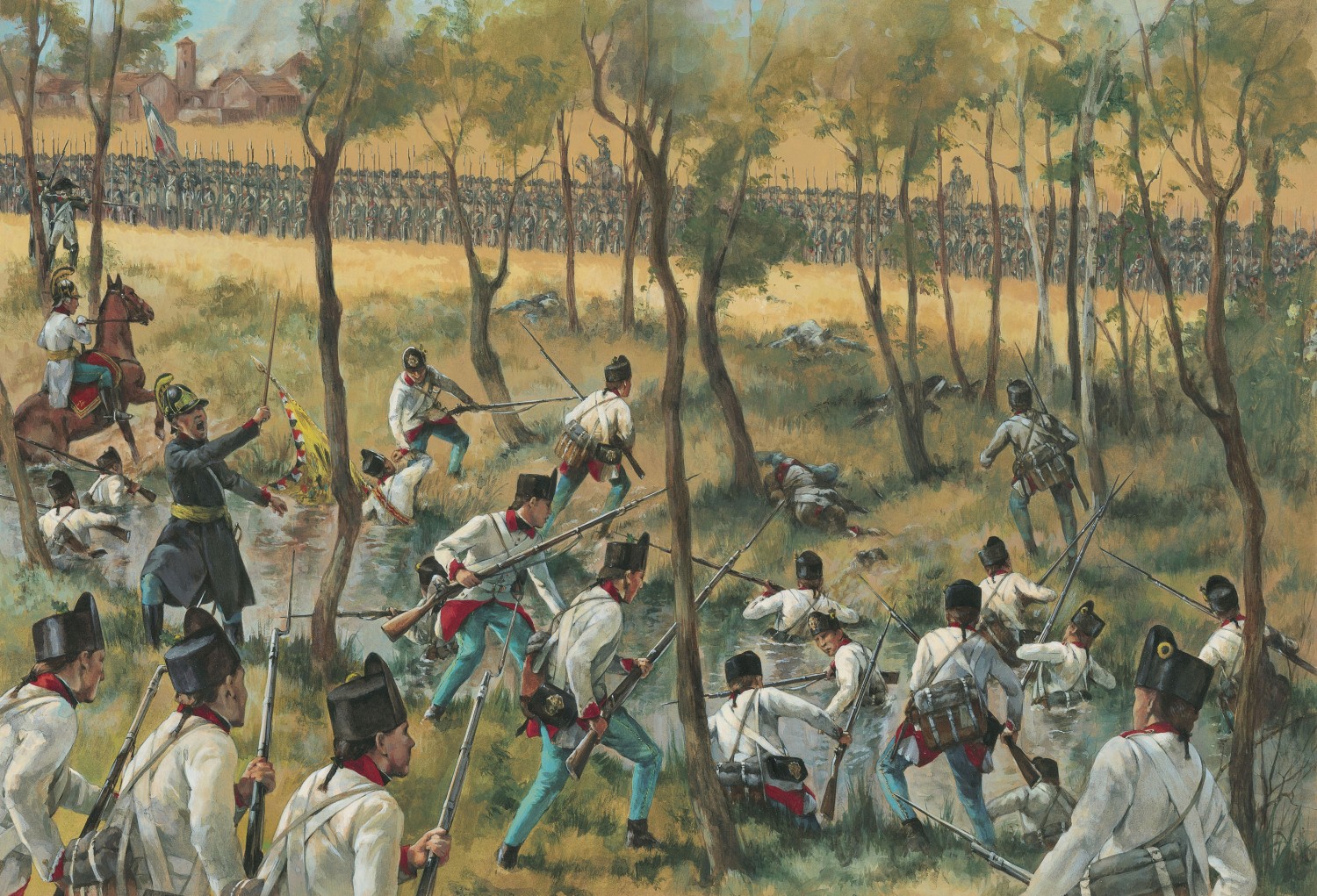 Not only was Austerlitz the first campaign Napoleon waged as Emperor of France, but also the first great test for his Grande Armée. The Emperor himself regarded it as his greatest victory and it undoubtedly won him a mastery of Europe that would remain unbroken for almost a decade.

This piece of artwork shows the battle for Telnitz. The small village of Telnitz on the banks of the Goldbach stream was destined to play a vital role in the Battle of Austerlitz. An Allied attempt to secure the village during the freezing night before the battle failed, leaving the French in possession. Anything that would burn was stripped from the houses to help warm the soldiers through the night. The attack on Telnitz began at about 7.00am. With a thick mist still covering the ground FML Kienmayer ordered his Advance Guard to capture the village. The defenders, men of the French 3ème Ligne, resisted ferociously from a low hill outside the village but repeated assaults by Austrian troops forced the French defenders back amongst the shattered houses. Further attacks ejected them completely but they quickly rallied, counterattacked and regained the village. With the brilliant sunrise beginning to filter through the thinning mist Russian Jäger from the main body of I Column joined the attack while the rest of the force waited in reserve. Despite their heroic resistance, the men of 3ème Ligne could not maintain their position and evacuated Telnitz. 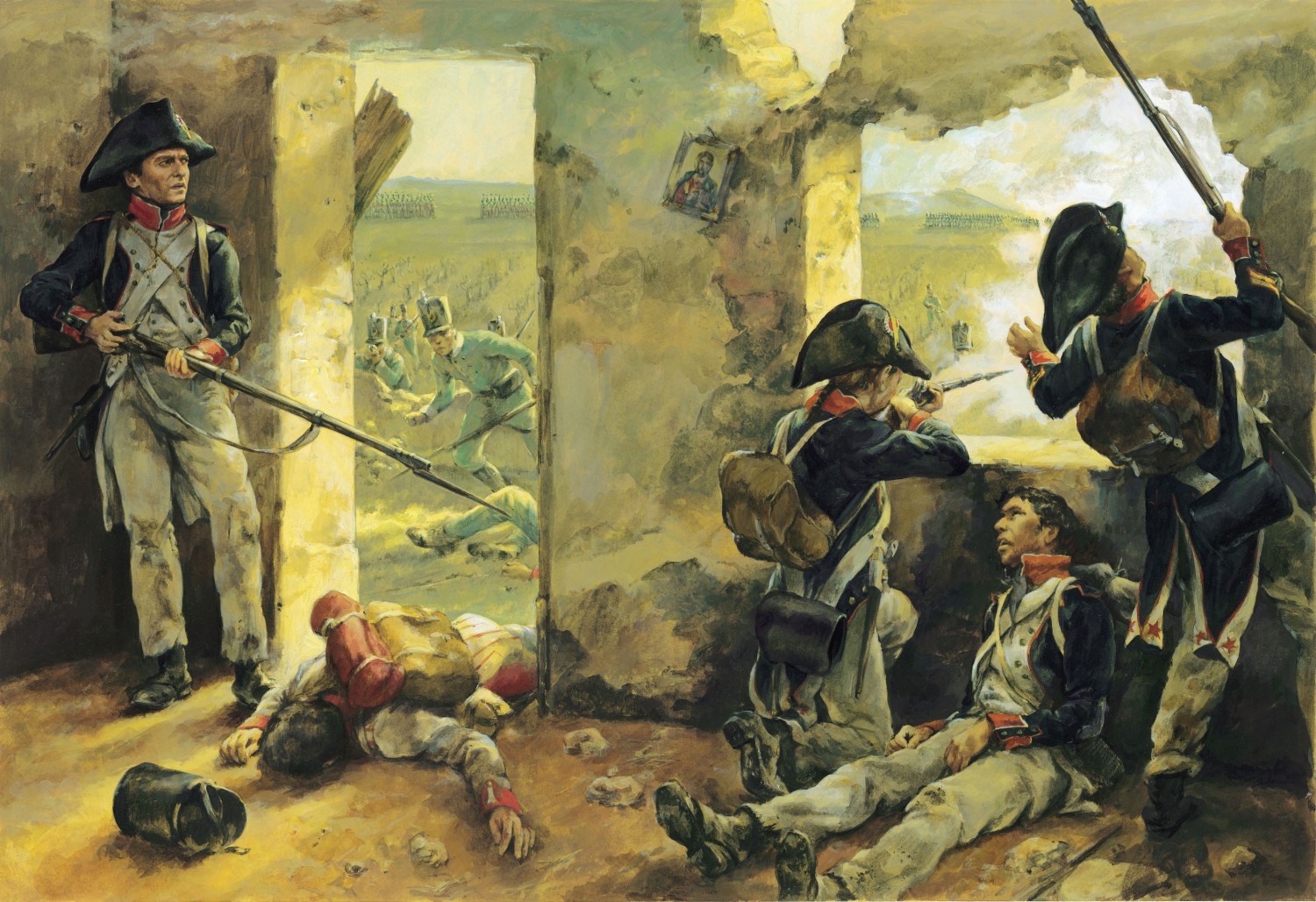 The battle of Borodino was one of the greatest encounters in European history, and one of the largest and most sanguinary in the Napoleonic Wars. Following the breakdown of relations between Russia and France, Napoleon assembled a vast Grande Armée drawn from the many states within the French sphere of influence. They crossed the river Neimen and entered Russian territory in June 1812 with the aim of inflicting a sharp defeat on the Tsar's forces and bringing the Russians back into line. In a bloody battle of head-on attacks and desperate counter-attacks in the village of Borodino on 7 September 1812, both sides lost about a third of their men, with the Russians forced to withdraw and abandon Moscow to the French. However, the Grande Armée was harassed by Russian troops all the way back and was destroyed by the retreat, which is depicted in this image. The greatest army Napoleon had ever commanded was reduced to a shadow of frozen, starving fugitives. 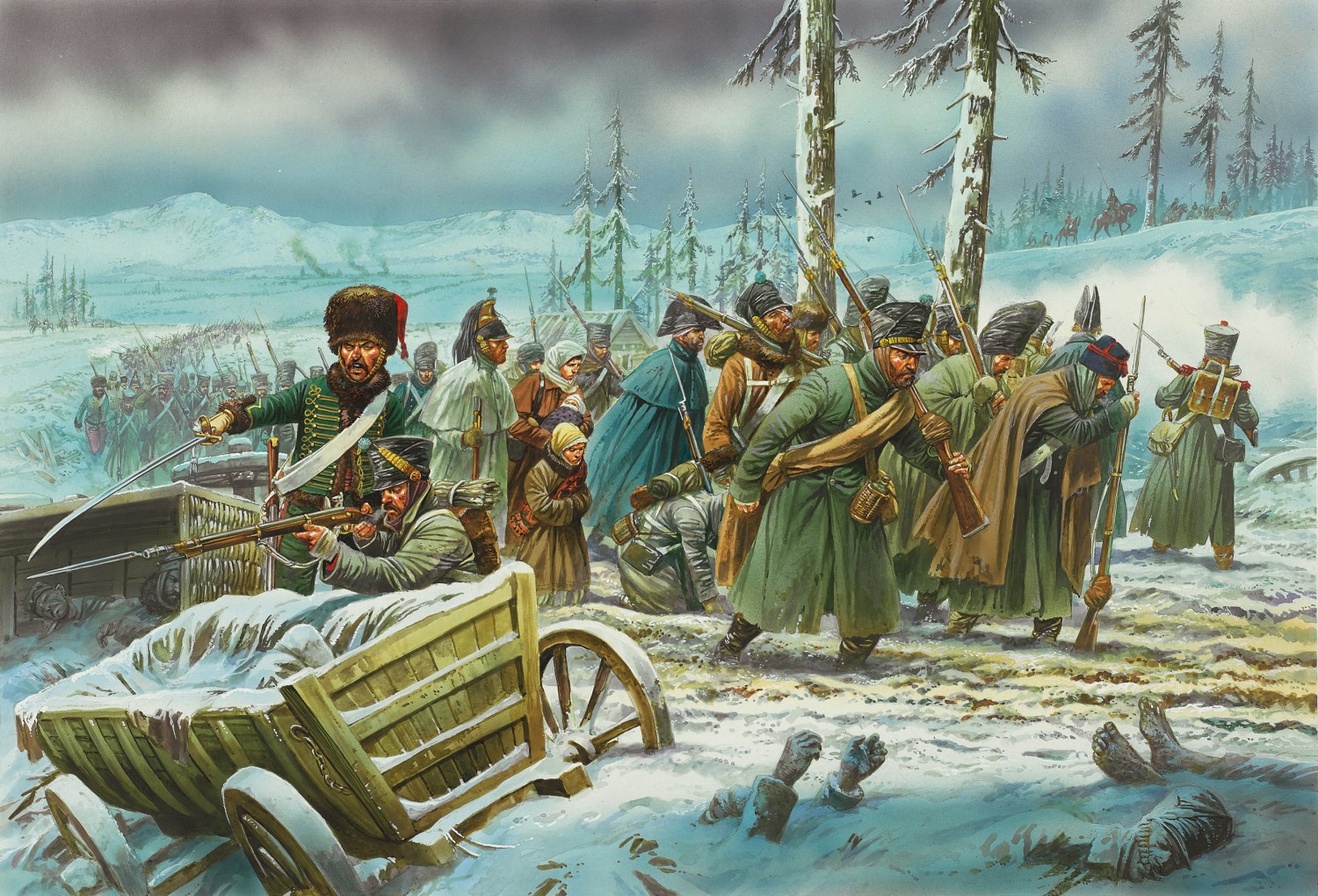 By this time, the Emperor was but a shadow of his former self: wearied by years of campaigning, a year in exile and – on the day of battle itself – ill. He had long since passed his peak, a fact highlighted by the series of blunders he himself made or allowed Ney to make, including his failure to keep the two Allied armies separated after Quatre Bras and Ligny on the 16th; waiting to commence action at Waterloo under the mistaken impression that the ground would sufficiently harden to enable his artillery to inflict maximum damage on Wellington's infantry; conceding the initiative by allowing the duke to establish himself on highly defensible ground of his own choosing; diverting too many troops to the attack on Hougoumont and failing to deploy his artillery against it; sacrificing his best cavalry in fruitless attacks against infantry deployed in square; and, finally, refusing immediately to commit his Imperial Guard reserve against the gap created in the Anglo-Allied centre by the fall of La Haye Sainte. Thus, by the time Napoleon ordered his men forward, as depicted here, Wellington had stabilized his line and the brief window of opportunity was no more. 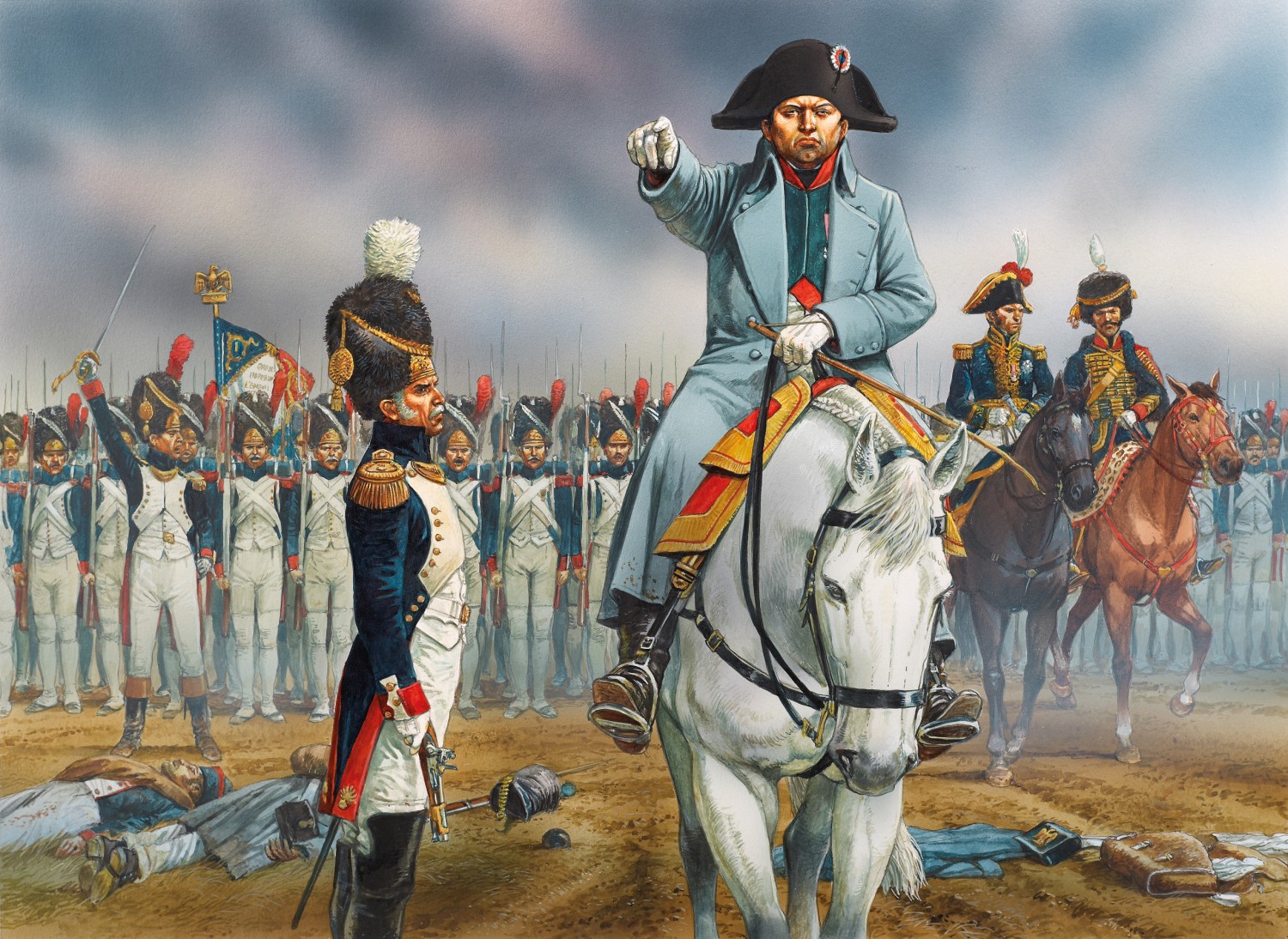 Also, if you're inspired to read more about Napoleon and his battles, see some of our related titles: