On the blog today, Marc Romanych, one of the authors of the upcoming New Vanguard title, World War II German Super-Heavy Siege Guns gives a brief overview of this latest title and shares how the book came about. 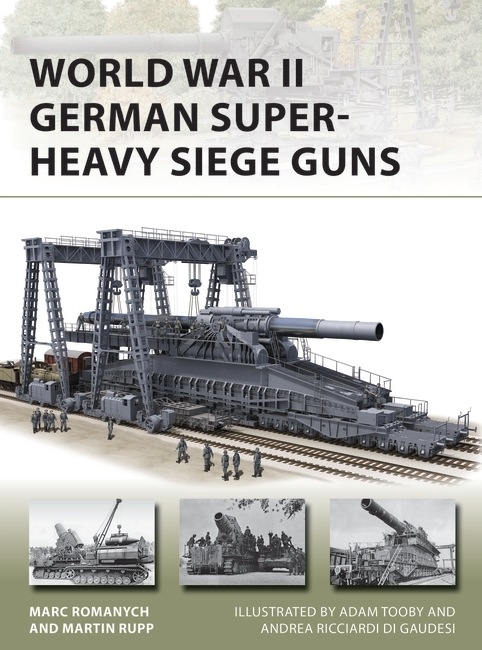 The origins of World War II German Super-Heavy Siege Guns (NVG 280) lie in the first book that my co-author Martin Rupp and I wrote for Osprey Publishing. While researching Maginot Line 1940: Battles on the French Frontier (Campaign 218) we discovered that the German Army used a World War I-era 42cm Gamma Howitzer to bombard the Maginot fortifications in June 1940. The howitzer, built before World War I, had escaped confiscation or destruction under the provisions of the Versailles Treaty and was reconstructed by the German Army during its period of rearmament in the 1930s. Further research into the history of the Gamma howitzer led us to write 42cm “Big Bertha” and German Siege Artillery of World War I (NVG 205). In that book we discussed the development and operations of the 42cm Gamma howitzer along with the other siege guns that Imperial Germany built to destroy Belgian and French fortifications. Because the story of German siege artillery did not end with the Great War, we decided to take the story to its logical conclusion and write a sequel about the siege artillery of World War II.

World War II German Super-Heavy Siege Guns describes the design, development, and employment of the very large-calibre siege guns built by arms manufacturers Krupp and Rheinmetall, as well as the Czech-made Skoda pieces put into service by German Army. The book discusses artillery pieces that were 28cm or larger and used to destroy fortified targets: the 80cm Railway Gun Gustav-Gerät, the 60cm and 54cm self-propelled Karl-Gerät, the 35.5cm Haubitze M1, the World War I-era 28cm Haubitze L/12 and 28cm Küstenhaubitze L/12 pieces, and of course the 42cm Gamma-Gerät. Skoda guns covered in the book are the World War I-era 42cm howitzer and 30.5cm mortars. The book’s artwork is based on the computer-generated models of Greg Heuer, my co-author for Railway Guns of World War I (NVG 249). A talented 3D computer modeler, Greg’s work served as the basis of the illustrations made for the World War I railway gun book, and Greg again kindly let us use his superbly detailed computer models for this new book. Particularly impressive are Greg’s models of the pre-production prototypes of the 60cm Karl-Gerät and the two views of the 80cm Gustav-Gerät being assembled.

While researching the World War II German siege artillery, Martin and I answered some enduring questions such as:

1) How many 80cm railway guns did Krupp build? Answer: Three, but only two were completed and only one saw combat.

2) Was the 80cm Gustav-Gerät used at Stalingrad? Answer: No.

3) What role did the 54cm Karl-Gerät have in the Battle of the Bulge and Operation Nordwind? Answer: Minimal.

To research these questions, we sifted through numerous unit war diaries and after-action reports and found new information about the combat history of the heavy artillery units equipped with siege guns. We were also able to analyze the effectiveness of the artillery to determine whether these types of guns were worth Germany’s investment in effort and materials. All in all, the book provides a good history of Germany siege artillery of World War II.