On the blog today, Steven Zaloga, author of the new Campaign title Warsaw 1920 shares how his latest book came about. 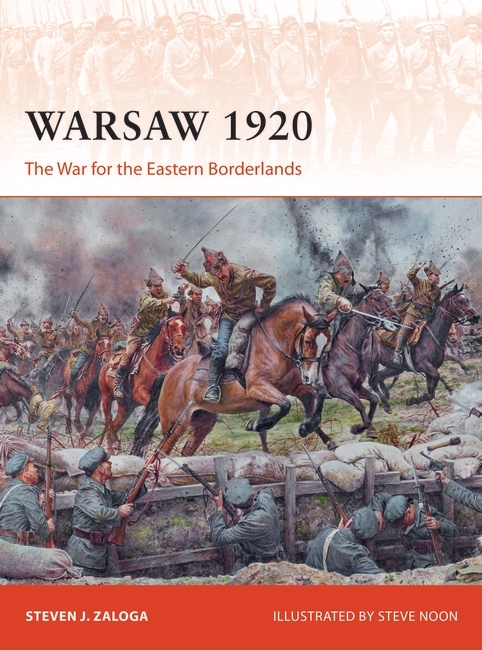 I have been interested in the 1920 Russo-Polish War for many years. Both my grandfather and great-grandfather served in the war in the Polish ranks. Curiously enough, my great-grandfather had previously been a soldier in the Imperial Russian army. I had suggested this subject as a title for the Osprey Campaign series on several occasions, but it seemed especially appropriate for publication in 2020 since it is the 100th anniversary of the war.

The 1920 war has largely been forgotten, though it remains important for many reasons. At the time, there was a book calling it the ‘“18th decisive battle in world history”.

To begin with, it offers some intriguing ‘“what if?’” scenarios. For example, if the Red Army had reached Germany through Poland in 1920, would it have re-ignited the Great War? The 1920 war also remains a fulcrum in central European history in World War II and beyond. The Soviet invasion of eastern Poland in 1939 was Stalin’s way of re-claiming the eastern borderlands lost in 1920. Although the conflict is usually seen as a Russian-Polish war, Ukraine was central in the fighting. The difficulties in creating a unified Ukraine in 1917-1920 has echoes in the present day, such as the fighting in the Donbass.

This book gave me the opportunity to use the documentary materials I had collected over the years. While doing language study in Poland in the late 1970s, I began picking up old campaign histories and unit histories. The subject was largely off-limits during the Communist years, but there were still many old books floating around in used-book stores. I also managed to collect a fair number of historical photos. Since the fall of the communist regime in Poland, the subject has seen a significant growth in interest there, including many new books, and even a few movies.

While in New York in the 1970s, I lived for a time on the Lower East Side, once a heavily Ukrainian neighborhood. I lived around the corner from the Ukrainian National Home. There were still a number of old Ukrainian stores in the neighborhood which had old books from the 1930s about the 1918-1920 fighting and about the various Ukrainian armies of the period. One of the most intriguing sources of information on the Ukrainian armies was the collection of reports of the US Army Military Intelligence Division written by US Army officers who had been liaison officers in the region during the fighting. I found these at the US National Archives back in the days when NARA was still centered in its downtown Washington DC location. (Today, most of NARA is in College Park, MD).

On the Russian side, I managed to track down the Red Army’s general staff study of the campaign which helped inform that aspect of the story. The war has not attracted as much literary attention in Russia as in Poland, but there is still quite a lot of material.

Even for military history readers not especially interested in the wars in east-central Europe, the book contains some interesting surprises. The Polish role in breaking the German Enigma code prior to World War II is becoming more widely appreciated. What is not well known is why the Poles were so deeply involved in code-breaking in the first place. It can be traced back to the 1919-1920 fighting, and then back to the Great War.

The Austro-Hungarian army in 1914-1917 had a code-breaking effort aimed at the Imperial Russian Army’s communications. Not surprisingly, many of the officers involved in this process were young Polish officers since many were bi-lingual. Keep in mind that the Austro-Hungarians allowed the creation of Polish Legions during the war, which encouraged Poles who grew up in the Russian-controlled regions of Poland to move to the Austro-Hungary’s Polish province of Galicia.

When Poland declared its independence in 1919, the officers convinced the senior Polish commanders to support code-breaking against both the Russians and Germans to support military campaigns. This required some outside technical assistance regarding suitable radio equipment, with most of this coming from France. Poland and France cooperated in breaking German ciphers in 1919-1920, starting a partnership that was later connected with the Enigma codes after the 1920 war. The Poles were very successful in breaking the Russian codes, and this played a decisive role in Polish decision making during the 1920 war. This subject is well documented in Polish, but it is not as widely appreciated in the English-speaking world.

Warsaw 1920 publishes today. Get your copy from the website now.