On the blog today, Mark Stille, author of the recently released Duel 105: US Navy Ships vs Japanese Attack Aircraft gives a brief overview of his new title. 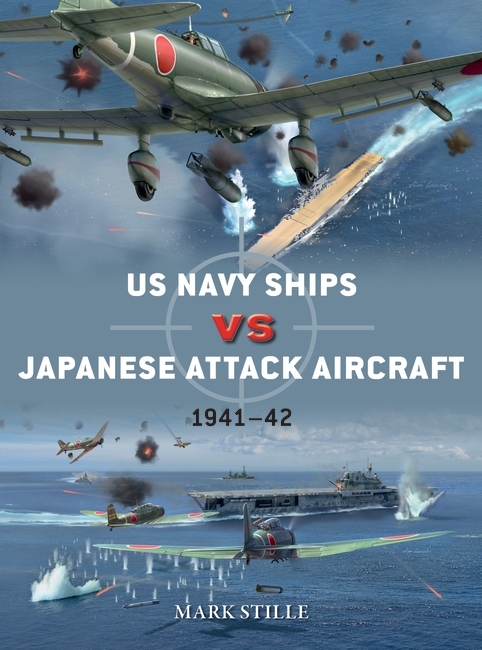 The Pacific War was to a very large degree decided by air attacks on ships. This book focuses on the operations of the Imperial Japanese Navy’s Air Force (IJNAF) against United States Navy (USN) targets for the first 13 months of the war. During this period, the IJNAF enjoyed a high level of success by virtue of its excellent aircraft and pilots.

The Pacific War began with a shocking demonstration of the IJNAF’s prowess when it pounded the Pacific Fleet inPearl Harbor. Despite myth of the attack’s overwhelming effectiveness, the Japanese actually underachieved during the attack. This was a result of the torpedo bombers over concentration on a relatively few targets and the utterly abysmal results of the dive-bombers. The reasons for this are outlined in the book.

The same aircrews that pummelled Pearl Harborwent on to fight four carrier battles in 1942. Before the first of these, the Kido Butai (the IJN’s carrier force) made a detour into theIndian Ocean. Against weak British opposition, the IJNAF’s carrier pilots, in particular its dive-bomber pilots, confirmed their elite status. Japanese dive-bombers sank two British heavy cruisers and an aircraft carrier and in the process recorded an accuracy rate as high as 85 percent against moving targets. Such a feat was not matched by any other navy at any point in the war. Against the USN though, the Japanese would be unable to repeat this accomplishment.

The carrier battles of 1942 were marked by several consistent themes. Among these was the tactical excellence of Japanese torpedo and dive-bombers’ crews. In each of these battles, broken down in the book in exacting detail, Japanese strikes were able to defeat American defensive efforts by fighters and antiaircraft fire to deliver punishing blows. The key to these attacks was the success of Japanese torpedo bombers. The Type 97 carrier-attack plane, combined with the excellent Type 91 aerial torpedo, possessed an unsurpassed ship-killing capability. Every time that the Japanese hit an American carrier with a torpedo in the carrier battles of 1942, it began a chain of events that led to the loss of the carrier. In this manner, the Japanese accounted for Lexington at Coral Sea, Yorktown at Midway, and Hornet atSanta Cruz. Where the only damage to an American carrier was caused by Japanese dive-bombers, the ships lived to fight another day.

The book does not ignore the USN’s defensive efforts against the IJNAF. Both sides saw their carriers as extremely vulnerable before the war, but in the event this was not the case. American carriers proved tough to sink. The USN’s preferred method of providing carriers’ air defense was by mounting an effective Combat Air Patrol of F4F Wildcat fighters. This was not an empty hope since the USN possessed the incalculable advantage of radar. However, the art of radar-guided fighter interception was evolving in 1942 –on no occasion was it entirely effective against the highly-trained and determined pilots of the Kido Butai. As a last resort, the Americans relied on antiaircraft fire to defeat Japanese strikes. At this point in the war, the USN had the most effective antiaircraft equipment and doctrine of any navy in the world. Using the redoubtable 5-inch/38 dual purpose gun for long range fire, and the excellent 20mm gun at short range, the Americans were able to take an increasing toll on attacking Japanese aircraft. At Coral Sea, losses to Japanese aircraft were so high that one of the IJN’s fleet carriers was rendered unavailable for the clash off Midway just a month later. Midway was the only occasion during the carrier battles of 1942 in which one side was actually able to ambush the carriers of the other when they were most vulnerable, so the Kido Butai was only able to launch limited strikes at the USN. For the two carrier battles during the Guadalcanal campaign, enough elite Japanese aircrews survived Midway to make IJNAF attacks deadly. The most interesting and maybe one of the least well-known carrier battles of the war was fought in October 1942. At the Battle of Santa Cruz, the Japanese were able to conduct a brilliantly coordinated attack that accounted for carrier Hornet. Carrier Enterprise barely survived, which prevented an American defeat from becoming a strategic disaster by losing the only two operational carriers in the Pacific. Santa Cruz was also the high-water mark of the IJN’s carrier force. Aircrew losses in this battle were extremely high – even higher than at Midway – and the quality and effectiveness of Japanese carrier aircrews would never be as high again. For the first time during a carrier battle, USN fighters and antiaircraft fire were about equally effective destroying Japanese aircraft.

The other story in the book is the story of the IJNAF’s land-based bombers. The fate of the Royal Navy’s Prince of Wales and Repulse offMalaya on 10 December 1941 is well known. On this occasion, the long-range bombers of the IJNAF used torpedo attacks to sink both ships. However, this was a feat that the land-based bombers could never repeat. The book traces the operations of these units during the Netherlands East Indies campaign. On two occasions, they attacked the Allies’ Combined Striking Force (CSF) of cruisers and destroyers with no fighter cover. Using only bombs, they enjoyed minimal success hitting a target, but on both occasions they forced the CSF to return to base. AtCoral Sea, the land-based bombers had another crack against an USN-RAN cruiser-destroyer force, but failed to hit anything and took significant losses in the process. The final large-scale daytime operations of IJNAF land-based bombers against USN targets occurred during theGuadalcanal campaign. Over the course of two consecutive days (7–8 August), the vulnerable Japanese bombers achieved little and took heavy losses. The 8 August attack was a real debacle as 18 of 23 bombers were shot down in exchange for fatal damage to two USN ships. A repeat performance in November did not go any better; 11 or 16 bombers were lost for light damage to one American ship.

The results of the heavy attrition to the IJNAF’s carrier- and land-based air units, due in large part to the excellence of USN antiaircraft fire, had ramifications for the way the rest of the war was fought. The book reviews subsequent Japanese air attacks on USN task forces, most of which were unknown, including the final carrier battle in thePhilippine Seain June 1944. If you want to delve into some of the more obscure air-naval clashes of the Pacific War, while examining some of the myths surrounding the better-known encounters, this is the book for you.

US Navy Ships vs Japanese Attack Aircraft is out now! Get your copy here.