Military historian Anthony Tucker-Jones explains what inspired him to write The Devil’s Bridge: The German Victory at Arnhem, 1944, which gives a unique insight into how the German armed forces so spectacularly defeated the Allied Operation Market Garden. 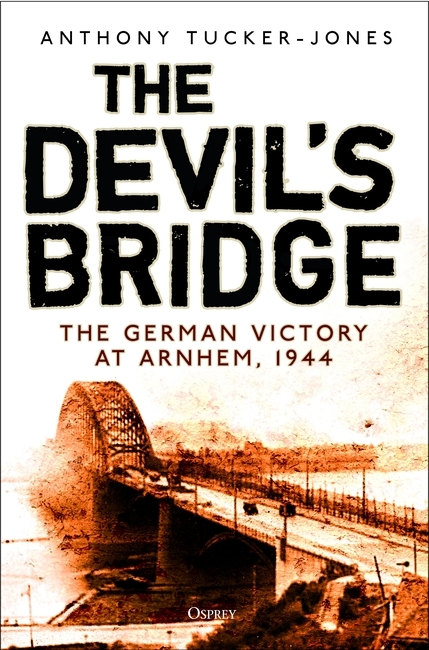 The idea for The Devil’s Bridge: The German Victory at Arnhem, 1944 all started with a nice glass of chilled Moselle. Over the years there had been numerous books on the epic battle for Arnhem, but they were always from the Allied point of view or an uneasy mix of Allied and German. For three decades, no one wrote an account in English purely from the German perspective, which in many ways is the more interesting part of the battle. As with most books, The Devil’s Bridge was largely inspired by a single scene. It was Eastern Front veteran Field Marshal Walther Model sitting down to Sunday lunch on 17 September 1944. He was just lifting a glass of wine to his lips to toast his staff when all hell broke loose. He very rapidly found Allied airborne forces landing around his ears and his initial thought was that they had come for him. Ironically, German intelligence was anticipating an Allied attack in the Netherlands, but was uncertain quite what form it would take. A ground push on Eindhoven was expected, but the arrival of British and American paras at Eindhoven, Nijmegen and Arnhem took Model completely by surprise.

It is very important to put Arnhem in context and to remember that after their defeat in Normandy in August 1944, the Germans were in headlong flight beyond the Seine. There was no sign of them stopping, and the Allies foolishly assumed they would not halt until they reached the defensive barrier of the Rhine. Once the Allies were in Antwerp in early September, it looked like it was all over on the Western Front. Crucially, though, the Allies were at the end of their supply lines and they paused for almost two weeks. This gave Model and General Kurt Student the tiniest of breathing spaces. They made the most of this, and instead of evacuating east of the Rhine, they began to bolster their very meagre defences. What makes the German victory at Arnhem all the more remarkable is that Hitler deliberately held back the bulk of his reserves. These of course were being regrouped and re-equipped ready for his surprise Ardennes offensive in the winter of 1944.

Accounts of Model’s reaction to the landings vary enormously. Some sources claim that his headquarters descended into utter chaos and that he fled in panic along with his staff officers. Others state that he very calmly ordered an evacuation to avoid capture, relocated his headquarters and immediately took command of his troops, ready to fight back. I have spent years studying the ebb and flow of the Eastern Front and Model was certainly not a man to get in a flap. On numerous occasions he snatched the situation from the jaws of disaster. Therefore, he was exactly the type of general Hitler needed to face down a surprise Allied attack in the Netherlands.

Model was not the only one who was good at his job. He was ably supported by SS-General Wilhelm Bittrich and General Student. By a quirk of fate Bittrich’s battered 2nd SS-Panzer Corps just happened to be lurking in the Arnhem area, where it was recuperating after Normandy. They wore the famous Totenkopf (‘death’s head’) skull and crossbones symbol, which prompted the title The Devil’s Bridge. Student, on the other hand, a para veteran of the campaigns in the Low Countries and Crete, had spent three years languishing in semi-exile behind a desk. Hitler had been so furious at Student’s heavy airborne losses taking Crete that he vowed never to conduct another large-scale airborne attack. Student fell from favour and from that point on German airborne troops fought as infantry.

Student got the call in the summer of 1944 to return to active duty. He was to put together a new army to try to restore the German front in the Netherlands. Student summoned all his old mates and cobbled together the 1st Parachute Army, which was to fight on foot. Student admirably rose to the challenge. To start with, his command was barely of divisional strength, with a ragtag collection of training units and convalescents drafted in from Germany. In the meantime, General Gustav-Adolf von Zangen and the German 15th Army were desperately trying to escape the advancing Canadians and Poles in order to evacuate over the Scheldt Estuary to Walcheren. This was carried out successfully, which meant that Zangen’s divisions were able to reinforce Student. As a result, the British ground corridor trying to link up with the British and American airborne troops kept being cut off.

I was intrigued – how did these men react in the face of Field Marshal Bernard Montgomery’s Operation Market Garden? This is what truly inspired me to write The Devil’s Bridge. Allied mistakes have been thoroughly dissected, but what I wanted to understand was not so much how the Allies lost, but rather how the Germans won. Ultimately, Student slowed the Allied ground advance while Bittrich and his divisional commanders, Heinz Harmel and Walther Harzer, fought a delaying action at Nijmegen and crushed the British 1st Airborne Division at Arnhem and Oosterbeek. They did this with a complete hotchpotch of units, which in many instances were far from front-line combat units. Once Bittrich had retaken the Arnhem road bridge he had effectively killed Market Garden dead in its tracks.

Inevitably I have been asked what the difference is between The Devil’s Bridge and It Never Snows in September.  Robert Kershaw’s excellent work, first published thirty years ago, has a much narrower focus, starting with the Allied airborne landings and ending with the British evacuation. I put the German battle in its much wider setting, encompassing the loss of Antwerp, 15th Army’s dramatic escape over the Scheldt, the flight of 2nd SS-Panzer Corps and German problems at Aachen, as well as the subsequent battles in the Reichswald ending in the Betuwe, and take the reader right up to the eventual liberation of Arnhem and the end of the war. I also cover the little-known attempts by the Luftwaffe and German frogmen to destroy Nijmegen’s bridges after they were captured by the Allies.

The Devil’s Bridge was not an easy book to write, because the fighting was so scattered and chaotic. Basically, Model had to contain a sixty-mile-long corridor, which resulted in fighting all over the place. That was one of the failings of Richard Attenborough’s A Bridge Too Far movie – if you are not already familiar with the battle it can be a difficult film to follow because of all the different locations involved. My challenge was to make the narrative fast paced and above all clear. Foremost I wanted it to be a good read, not only explaining what happened, but also placing the reader right in the middle of the action and on the ground with the German troops from the very start.