Over the course of his 30-year career, Alastair MacKenzie, author of Pilgrim Days, served in some of the world’s most elite special forces. Whilst a member of the British Parachute Regiment in the 1970s, MacKenzie was sent on a combat survival course held by the SAS. This course, part of the SAS selection continuation training, was also open to a select group of British and NATO military personnel. The course had two phases, designed to train attendees for ‘combat survival’ and ‘resistance to interrogation’ if they found themselves stranded or captured in hostile territory.

In today’s blog post, an extract from his book, Alastair recalls just how extreme this training could get: 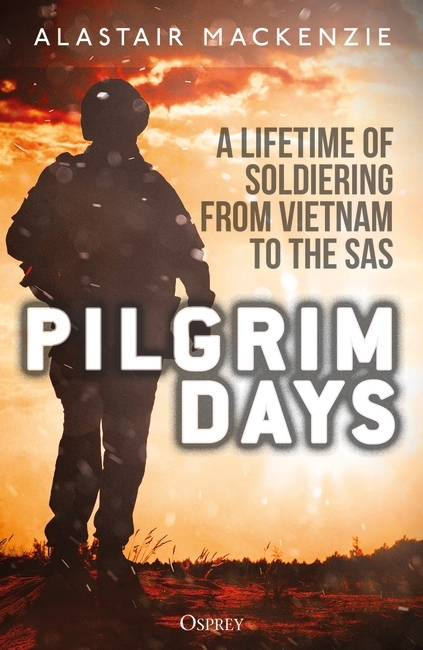 The truck stopped, and we could hear low voices outside. The little side door opened, and a deep and threatening voice said, ‘First one, oot!’ We were now sitting up in the truck covered in bits of straw and all looking apprehensive. We looked at each other and somebody climbed slowly out through the door. We heard sounds of a short scuffle and then silence. Back in the truck I looked at the others and indicated that I was going to try to make a break for it through the cordon. Arthur D tried to dissuade me, saying that we would all be beaten up but my mind was made up. The scary voice now said, ‘Next!’ I moved to the door, put my fingers on the outside, and hurled myself out. Big mistake! There was a ring of grim-looking Paras outside the door and they merely extended the ring as I sat there growling and snarling like a Tasmanian devil. The result was very brief. The Paras simply closed in and enthusiastically overwhelmed me. I was dragged firmly into the cold, draughty concrete bunker, blindfolded, searched and made to lean on my fingertips, at an angle, against the wall for many hours.

I heard others being dragged in. I could sense Para guards moving silently amongst us. If I moved my hands or tried to stand upright firm hands would push me back into the leaning position. It is surprising how the smallest dimples in a concrete wall can become like needles on the ends of fingers after several hours. Occasionally, I would be forced down into a sitting cross-legged position with my hands on the top of my head. This made the muscles in my arms burn with pain and any dropping arms would be firmly and forcefully replaced on my head. After about six hours I was made to sit down and given a piece of dry bread and some water. My blindfold remained on, but I was able to glimpse other prisoners sitting or leaning on the walls around me.

I had heard scuffling noises and soon it was my turn as I was dragged off to a tent for my interrogation. The guards stood behind me and I was forced to sit on a low, one-legged stool. My blindfold was removed and, blinking in the light of a lamp focused on my face, I could discern a uniformed officer sitting behind a desk. I was asked who I was and I proceeded to say the appropriate mantra of number, rank, name and date of birth with which we had been trained to respond. As I became more and more tired and hungry this was a very effective mantra to repeat. Whenever I was asked for additional information I would simply say, ‘I cannot answer that question, Sir.’ This went on for some time and the interrogators would change around so that one was ‘Mr Nice’ and one was ‘Mr Nasty’. All the while I was trying to maintain my dignity and stay upright on the wobbly one-legged stool.

Suddenly, Mr Nasty leapt to his feet while shouting abuse at me. Unfortunately, his foot must have caught in the power cord and we were all plunged into darkness. Mayhem prevailed! I jumped up and tried to find the entrance to the tent we were in, Mr Nasty was shouting at the sentry to catch me, and the sentry was trying to find me in the darkness. I managed to get out of the tent and was clambering up a chain-link fence when reinforcements arrived, pulled me down by my legs and I was bundled back into the pen and put up against the wall again.

I had not had my British Army regimental number for long and so, as the isolation periods dragged on I started to worry that I might forget it or jumble up the numbers confusing it with my New Zealand Army number. This would have immediately brought me to the attention of the interrogators – which was not something I wanted.

The interrogators would try to elicit a ‘nod’ or ‘shake’ of the head or obtain a signature on an apparently insignificant document. These could later be used in a totally different context for propaganda purposes. The hours dragged slowly and painfully. Although there was no physical violence we were now being entertained by ‘white sound’. This is noise which has no rhythm, just abrasive everchanging sounds. It can be compared to the static on a badly tuned radio. It is impossible to ignore and can become rather stressful. The white sound, blindfolds, isolation, lack of sleep and food took its toll on a number of candidates, who requested to be withdrawn from the exercise.

After several other interrogation sessions and some 36 hours I was finally taken out of the pen, my blindfold was removed, and I was told by someone in uniform wearing a white armband that the interrogation exercise was now finished for me. I refused to believe what I was told and continued with the mantra of number, rank, name and date of birth. Finally, I was persuaded that he was indeed a member of the directing staff (DS) and that my interrogation phase was actually complete.’

Pilgrim Days publishes in paperback next week. Preorder your copy from the website now.