On the blog today, Michael Claringbould shares how his interest in the Pacific air war came to be and how that resulted in his latest Duel title, P-47D Thunderbolt vs Ki-43-II Oscar. 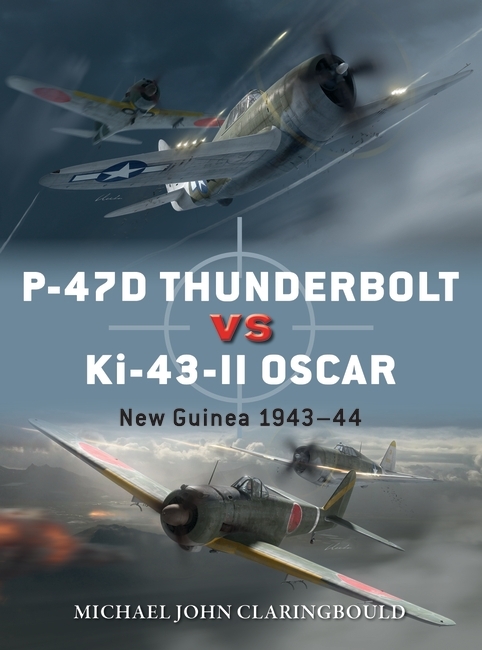 The Pacific air war has always fascinated me, as much for the human interest as the technical and aviation aspects. My formative years were spent in Papua New Guinea in the 1960s, during which I became fascinated by the many WWII aircraft wrecks which lay around the country. Over subsequent decades I have identified many wrecks, helping the recovery of missing WWII aircrews in New Guinea and the Solomons. Later I was lucky enough to spend much of my overseas career in the South Pacific where I had the fortune to return home to Papua New Guinea for three years commencing 2003. I used to rebuild and fly antique aircraft, which I like to think gives me broader understanding of the limitations of aerial combat.

The motivation for the efforts in this volume of Hayabusa versus Thunderbolt in this fascinating theatre stem back to a late afternoon in August 1976 at Alexishafen, on New Guinea’s northern coast. There, a German priest reluctantly allowed me to photograph Japanese aircraft wrecks on the mission’s land. There was no shortage of relatively intact airframes, but one in particular, a three-bladed Oscar, intrigued me. Curiosity caused me to start collecting all material on the arcane subject of the JAAF in New Guinea, but this was frustrating. Few publications, including Japanese-language ones, agreed on history, heraldry or even unit assignments.

New Guinea, it seems, remains the lost theatre for the JAAF, where a rich and colourful history encourages many falsehoods to persist. The JAAF entered New Guinea with well-founded reluctance. The complexity of JAAF operations in this geographically diverse and challenging realm saw it operate an eclectic inventory of fighters, along with a wide range of bombers, transports, reconnaissance aircraft, civilian airliners and even attack aircraft. I soon learned that the modus operandi and history of the Japanese Army Air Forces (JAAF) compared to their Navy equivalents is like rivalling chalk and cheese. For a start, Army aircraft were imbued with French design heritage, and the resultant types bear no resemblance to those of its naval cousins.

In New Guinea, the JAAF experimented with technical and ordnance modifications, including the use of German Mauser cannon shipped to Japan aboard an Italian submarine. Neither were its pilots prepared for the harsh tropical environment, yet they adapted well. Ultimately it was overpowering Allied resources and airpower which expelled the JAAF 4th Air Army from the theatre. Then, thousands of airmen and groundcrew perished during a desperate jungle retreat. Against this background an inflexible Tokyo high command, far removed from the constant horror of USAAF strafers, found time to admonish field commanders for events far removed from their control. Some commanders were ‘punished’ by being removed from the theatre into training position, which often proved blessing in disguise.

I am lucky to have libraries of unique material including interrogation reports and Japanese-language reports and diaries. It is hard not to smile at the conclusion of the interrogation of Lieutenant Oishihashi Masao, adjutant of the 77th Sentai, in which he rails against his Tokyo superiors. Angry that they had sent him into an unwinnable war, he robustly announced his intent to return to Japan where he would confront them. The JAAF involvement in New Guinea in one respect did not end until 1954 when four bedraggled and armed men were paraded before a Dutch policeman outside Hollandia. They proved the last JAAF survivors from the jungle retreat and were treated as heroes when they finally returned to Japan.

My focus these days is aligning Allied and Japanese records to gain a more realistic picture of the air war, its outcomes and its realities. I only work with primary source documentation of which there is no shortage, and from both sides. For too long historians have written about this conflict without consulting records from the other team, and I continually find surprises, unique situations and explanations to mysteries which confounded so many at the time.

I began writing the South Pacific Air War series for Avonmore Books in 2017, and research in this respect continues to the present day with the fourth volume due for release later this year. This process has resulted in a detailed and accurate matching of Japanese and Allied accounts to give the most factual history of this campaign yet produced anywhere worldwide.  I am very pleased that Osprey has now commissioned this second book in their DUEL series which makes use of my expansive research library. I hope you enjoy reading about the mercurial combatants of New Guinea from all sides from so many years ago.

Order your copy of P-47D Thunderbolt vs Ki-43-II Oscar to read more.