The English Civil War is a beautifully presented atlas that tells the whole story of Britain’s revolutionary civil war, from the earliest skirmishes of the Bishops' Wars in 1639–40 through to 1651, when Charles II’s defeat at Worcester crushed the Royalist cause, leading to a decade of Stuart exile. Each map is supported by a detailed text, providing a complete explanation of the complex and fluctuating conflict that ultimately meant that the Crown would always be answerable to Parliament. On today's blog post, author Nick Lipscombe explores how this latest title came about and how the maps featured were produced. 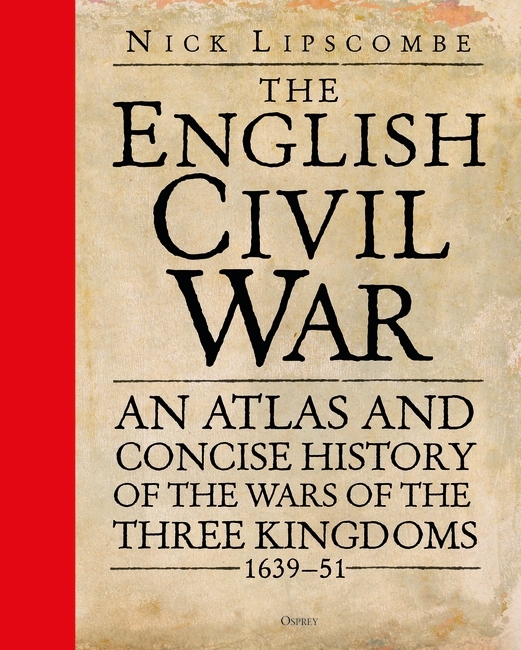 As for geography, Trim, (said my Uncle Toby),’tis of absolute use to a soldier… He should know… if it is required… to give thee an exact map of all the plains and defiles, the forts, the acclivities, the woods, the morasses, through and by which his army is to pass.

I used this marvellous quote by way of an introduction to my Atlas (and concise history) of the Peninsular War, published by Osprey in 2010. It aptly summarises the importance of maps in the execution of war. But maps and war have a more enduring connection. The history of mapping and the history of war are as one.

My interest in military mapping took root early in my army career. On my graduation from Sandhurst my father brought me a set of William Napier’s works on the Peninsular War 1808–1814. They sparked a lifelong interest in this campaign, and the Napoleonic Wars generally, but the six-volume history, while undoubtedly well written, was marred by poor and confusing cartography.

On leaving the army in 2013, I moved to Oxford, and in my village of Old Marston there is a house called ‘Cromwell’s House’. That pricked my curiosity and led to further investigation. The English Civil War was something I knew little about, apart from the fact that it was neither exclusively English nor civil. The wars between 1639 and 1652 took place in Wales, Scotland and Ireland as well as England and this has, inevitably, led to a desire to make the title of this monumental struggle more relevant. The term ‘the Wars of the Three Kingdoms’ is the latest offering – and this serves the purpose – not perfectly, but better, perhaps, than any that have come before.

Official military or topographical maps did exist in the early seventeenth century, but these were mainly prepared for defence against invasion, fortification of the northern border with Scotland and of naval dockyards and depots. In the wake of the Civil Wars in England (but not Wales) only the major battles were retrospectively mapped and recorded. In Wales, with the exception of the mapping of some fortifications, the military mapping seems to be non-existent. In Scotland, the mapping concentrated on the rebellion and its subjugation, while in Ireland the mapping tended to focus on Protestant colonialization and the subjugation of the Catholic Irish.

It is also important to understand that when we talk of period maps, they took varying forms. There was, and is, a collapsing of the distinction between map and image. In the seventeenth century, those formats ranged from profile, panorama, birds-eye-view and, occasionally, a scale plan. Today we have photographs and satellite images both serving as a form of map for immediate tactical purposes.

By the early seventeenth-century two cartographers, Christopher Saxon and John Speed, had mapped Britain, but despite advances in surveying technology and printing from engraved copper plates, their works more resembled Tolkien’s map of Middle-earth than the national mapping that appeared 150 years later in the wake of the Jacobite rising and the threat of Napoleonic invasion. Although at the end of the eighteenth century, the maps of Spain and Portugal were less advanced by comparison with those in northern Europe, the production and mapping of the Atlas of the Peninsular War was, nevertheless, a far more straightforward task than mapping the battles of the Wars of the Three Kingdoms.

The military campaigns from the Bishops’ Wars in the late 1630s to the final conquest of Ireland in 1652 have never been mapped in entirety before. For most of the Civil War encounters there is a very good idea of the general area of the battle or activity. But this is a moving target. Even when the general area of where a battle was fought is known, it remains a challenge to piece together the sequence of events and precise layouts of the opposing forces. Very few individuals had time pieces, so time is a relative concept in battles of the era. Units did not keep war diaries and much of what individuals recorded in their diaries and memoirs was hearsay, gleaned subsequently around campfires. Nevertheless, the amount of written primary source material available is surprisingly abundant. A glimpse at book’s extensive bibliography bears testament to this.

Although these registers identify 31 important battles of the wars, I was astounded by just how many actions there were across the three Kingdoms over a 14-year period. I list, in the book’s chronology, 67 battles, 10 skirmishes (there were many more smaller ones not listed) and 81 sieges of varying size and intensity. I have researched and depicted 41 battles and skirmishes and 24 sieges in the mapping. It has been an interesting and rewarding challenge.

Interesting because the period of the wars has no real parallel in English (and one could argue Irish) national history. There were other national convulsions (indeed recently some have chosen to compare the wars’ divisions to Brexit) but none of these conflicts disrupted so many lives or imprinted themselves so deeply on the nation’s memory. Rewarding because it gave me reason to visit many of the places where the battles or sieges took place. Meeting the many local experts and enthusiasts from across the Midlands, the Cotswolds and Chilterns, the South West, Yorkshire, Lancashire and Northumbria has been, quite simply, both gratifying and fulfilling. My only regret was that I was unable to travel more widely but Wales, Scotland and Ireland are firmly in my sights.

I am giving a number of talks on Mapping the English Civil War for a number of organizations and societies over the next few months. Most (at the moment) are online, so if you require more information as to links/dates/timings, please contact Osprey.