On the blog today, Mike Napier shares the importance of the Cold War to him and gives a brief overview of his latest Osprey title In Cold War Skies. 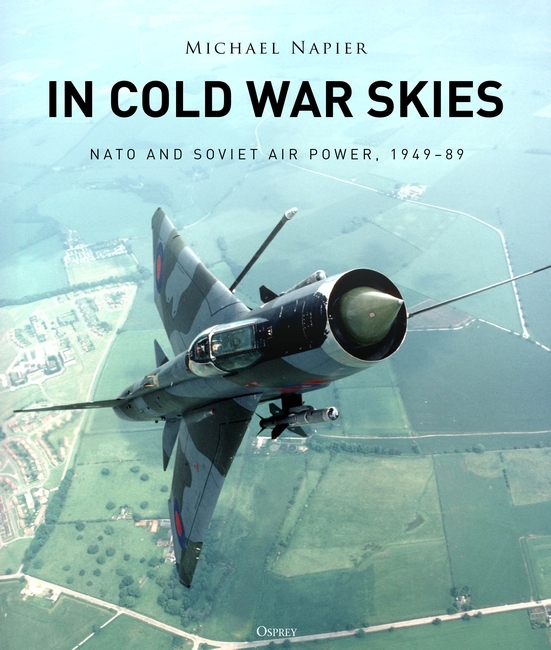 The Cold War has been perhaps the greatest single influence on my life, dominating my childhood and the first ten years of my professional career. My father was an army officer, so it was impossible as we moved between postings in Germany not to feel the undertones of menace from the Warsaw Pact or to be aware of the presence of the NATO forces that were safeguarding Western Europe. There were 55,000 British troops alone deployed to Germany as part of the British Army of the Rhine (BAOR), and RAF Germany was a tactical air force which had more combat squadrons than the whole of the RAF does today. When I joined the RAF as a trainee pilot in the late 1970s, our training was focussed, just as it had been in the two previous decades, on countering the threat posed by the USSR and its Warsaw Pact allies. That threat was still as strong as ever when, midway through the 1980s, I arrived at RAF Brüggen, on the German-Dutch border just to the west of Mönchen-Gladbach, to start my first tour as a Tornado strike/attack pilot.

Of course, Brüggen was only one part of a huge military organization, which was also mirrored on the other side of the Iron Curtain: across the Inner German Border, highly professional air forces equipped with the most modern aircraft stood ready to do battle with each other. RAF Germany was an exciting place to be in the 1980s and the Cold War experience, punctuated by the frequent no-notice exercises, was an all-consuming lifestyle. I had always kept up to date on the structure and equipment of the RAF, but I now became fascinated with the aircraft that equipped both our allies and the various Warsaw Pact air forces ranged against us; I was also interested to know which units flew them, where they were based, how they were organized and how their aircraft might be used in time of conflict. At that time, the Cold War seemed to be a permanent fixture – just as permanent as the vast complexes of concrete bunkers and aircraft shelters that fringed the airfields of the day. And then, almost overnight, it was all over. The Berlin Wall fell, and the Warsaw Pact disintegrated. Now, 30 years after the fall of the Berlin Wall, all those once-important structures, both physical and organizational, have blurred into a distant memory and it feels almost as if they never existed. My own home for ten years, RAF Brüggen, has long since closed: nowadays the airfield that was once the pride of RAF Germany is disused and its buildings lie derelict. Even the bomb-proof aircraft shelters will soon be demolished and then there will be almost no sign of the bustling airbase that thrived there for nearly 50 years.

I am determined that the Cold War – that important 40-year period in European and World history (and of course in my own heritage) should not be allowed to be forgotten altogether. Nor, indeed, should the sacrifices made by the significant number of airmen on both sides of the Iron Curtain who lost their lives in accidents or operations while flying in the service of their countries. The Cold War may not have been a shooting war, but a war it certainly was in terms of human costs and I lost some good friends to it. So, when it came, I seized the opportunity to write a history of the air forces of the Cold War, with the aim of chronicling the evolution of the organizations, the people, the aircraft and the weapons of that time.

The year of 1949 makes a good starting date, since that was the year that NATO was formed and although it post-dates events such as the Berlin Airlift, I think that it marks the formal start of the Cold War. The end date of 1989 is defined by the fall of the Berlin Wall, thus conveniently making a period of exactly 40 years, divided into four distinct decades. Within each decade, I have also described developments within the contemporary regional theatres, since both sides recognised virtually the same geographic boundaries within their command structures.

I have also included enough of the political background to put the military events into their wider perspective; a few first-hand accounts also bring the historical narrative to life.

This approach has enabled me to examine the forces deployed within each geographic area and timescale to compare like with like. The evolution of the strategic strike forces and air defences of the USA and USSR are described in detail, but so too are the tactical commands and their equipment in both NATO and the Warsaw Pact in northern, central and southern Europe. It's fascinating to see how the fortunes of the various formations waxed and waned – for example how the four Air Wings of the Canadian 1st Air Division Europe of the 1950s had shrunk to just three squadrons of CF-188 Hornets by the 1980s, or how the Verwaltung des Aeroclubs (VdA) (Administration of the Aeroclub) of the 1950s in East Germany was transformed into the powerful Luftstreitkräfte/ Luftverteidigung der Nationalen Volksarmee (LSK/LV) – the Air Force of the Deutsche Demokratische Republik

>. It is interesting, too, to see how long-lasting aircraft types such as the Boeing B-52 Stratofortress and the Mikoyan-Gurevich MiG-21 (Fishbed) evolved over the years to stay at the cutting edge of capability throughout most of the Cold War.

Nor have I forgotten the Non-aligned nations – Sweden, Finland, Austria, Switzerland and Yugoslavia, all of which remained aloof from the polarization of Europe either through choice or through political necessity, and Albania and Spain, which respectively left and joined alliances during the period. The air forces of all of these nations during the Cold War years are described in detail. Strange to say, perhaps, but I'm most proud of the appendices of the book, which contain Air Orders of Battle (AOB), detailing the front-line tactical units deployed within Europe on either side of the Iron Curtain. I have produced AOBs representing the strengths of each of the air forces halfway through each decade: in 1955, 1965, 1975 and 1985. Drawn from numerous sources, these lists give, I believe for the first time, a complete picture of the air forces facing each other at the time.

The Cold War is a captivating period of history and the part played in it by the air forces of the participants – and of the bystanders – is a fascinating subject. On a personal level, in many ways it still defines me – I see myself first and foremost as an ex-RAF Germany man and I am extremely proud to have served there as a front-line pilot. So, this book comes from the heart: it is a comprehensive account of the four decades of the Cold War from the perspective of military aviation, written by a military aviator. I hope that this book will also serve as a lasting testament to the important achievements of the many who served in all of the air forces involved. And - as I have written in the introduction to the book: ‘I have described the development of military aircraft at a time when improvements in performance and capability were fast-moving and defence funding seemed almost unlimited – in short, a “golden age” of military flying.’

I have described the development of military aircraft at a time when improvements in performance and capability were fast-moving and defence funding seemed almost unlimited – in short, a “golden age” of military flying.’

In Cold War Skies publishes next week. Preorder your copy from the website now!