Søren 'Bloodbeard' Bay from Bloodbeard's Garage is back on the blog as he prepares for Zona Alfa: Salvage and Survival in the Exclusion Zone by Patrick Todoroff. Be sure to follow his Facebook Page and check out all of his content at Bloodbeard's Garage!

Happy New Year fellow hobbyists! Every year I try to make a hobby resolution for myself. Two years in a row I've succeeded in my goals: paint a lot of models and limit my hoarding. This year I aim to try out solo gaming for the first time - and first up is some Zona Alfa!

Being a huge fan of the inspirational material (S.t.a.l.k.e.r. and Metro 2033), I really dig this new book by Patrick Todoroff, and after reading through the rules, my mind was buzzing with ideas for models, terrain and little scatter pieces. I know exactly what mood I'm going for with Zona Alfa – and my current wasteland won't cut it without upgrades!

I'm here to share the stuff I've made to get going and will be back when it's all finished.

Zona Alfa lets you choose between six different faction and I've gone with the independents - like Red in Roadside Picnic. The story is that my leader is new in their role. He’s part of an old crew whose last Zone Run went bad – really bad – and the old leader and some of the veterans got hurt. It was time for my guy to step up and start calling the shots as the leader of his own crew!

Zona Alfa is a WYSIWYG game and when recruiting a model it starts with a lot of gear, so there's no reason to track game credits from the start. The amount of gear and skills are depending on the miniatures action point level, and they pick freely from the armory. You have 12 action points with which to build a crew.

When I got Zona Alfa, I was lucky to get a great deal on some base coated Lead Adventure models on a trade site – happy days. I picked the coolest for the team, they are described from left to right.

Skills: Leader, hard (he'll be tougher to take out off action). My leader the figure pointing on the left side in the photograph below.

A good friend of my leader, an old colleague. This guy has never been one to take a leading position, but he is super professional.

Skills: Unload, hustle. Excellent skills - will bring extra firepower and speed. I can see this make a difference many times.

A couple of hardened veterans and freelancers, brought in by the leader when he decided to make his own crew.

Skills: Steady hands. Being a better shot at a greater distance with that machine gun.

Assault rifle, pistol, smoke grenade, flashbang, 2x med-kit. The extra med-kit is a faction bonus, and the grenades are to provide cover.

Skills: Bone doc. He's better at healing his comrades when the get hurt.

Rookies.  They are cheap, unpaid even. Their pay on the first runs will be experience. These guys just need to nut up, shup up and stay alive - they might just make stalkers someday.

So that's the starting crew. It'll be exciting to see those 1 AP rookies try and get anything done and not fall to far behind. Rolling a critical for a free action on these guys will make a lot of difference for them.

I have a lot of post apocalyptic terrain and I've built lots of modern stuff for the games of Last Days: Zombie Apocalypse – but it all has that suburban US or Americana style. That won't do in the wet, grey, post-soviet exclusion zone.

I think a few simple tricks will help turn around my terrain collection to get the right vibe going.

First, I've used a few paint-fu tricks to make some Russian signage. I found some warning signs on Google and scaled them down. You can find a printable document on the Zona Alfa community FB page.

My plan is to make some scatter terrain from these (and enter the Zona Alfa terrain competition). These will show clearly (with the addition of a few rusty oil drums etc) that this is an exclusion zone.

The biggest signs will be glue on cardboard and can quickly be added to my MDF brick buildings. In no time those buildings will become a Russian cafe, supermarket or hotel. Some of the toy cars I've painted as terrain will work fine for Zona Alfa. I have both lightly weathered and completely rusted ones. But a few military vehicles would be nice, especially for some of the printed scenarios. So, I jumped on Ebay, searched for 'russian military vehicles' and found a few toys. The scale is probably slightly off, but the models vary in size as well.

My experience with this is that it doesn't really matter. When the toys are matt varnished and weathered it'll look good on the board no matter what. 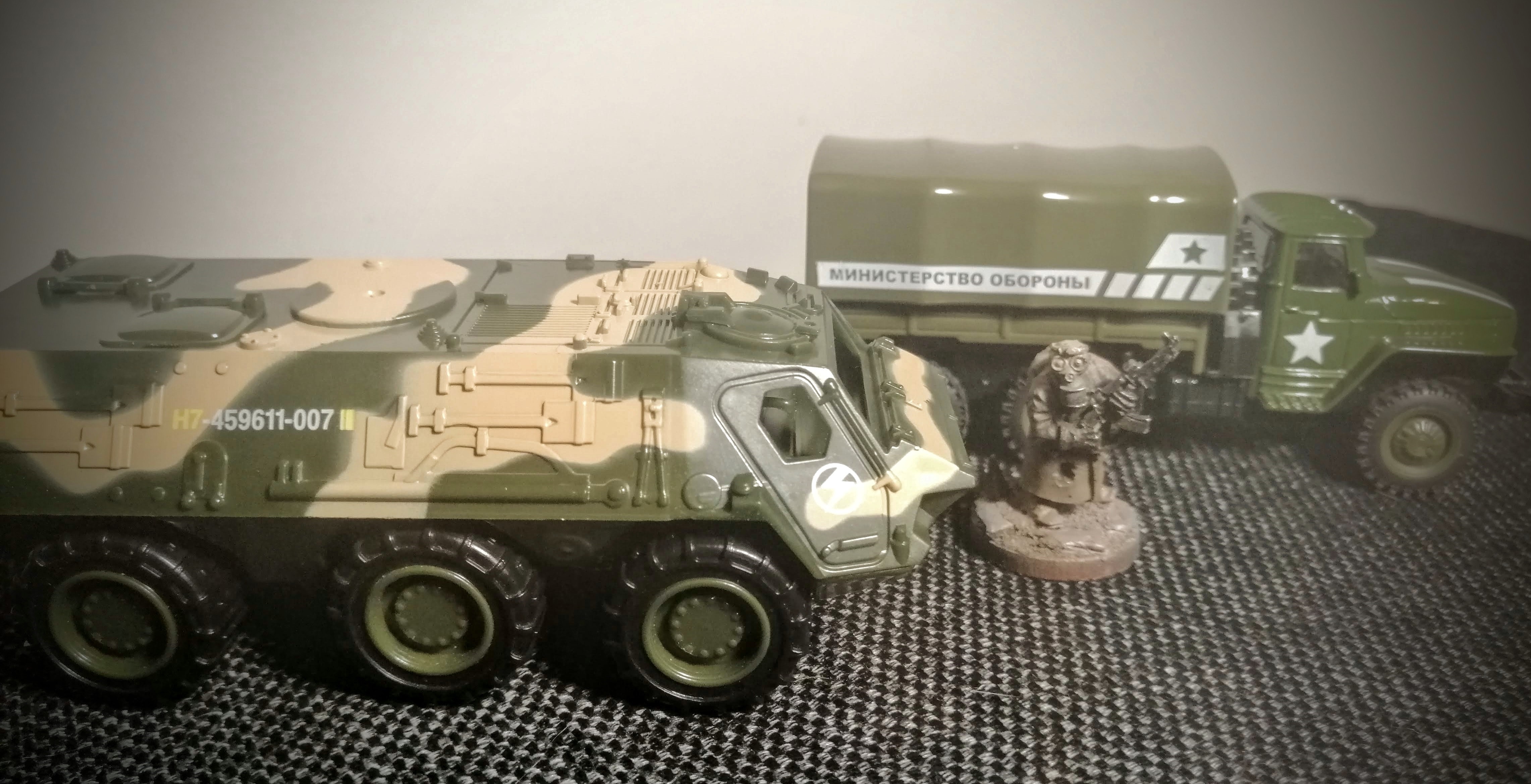 With a minimal amount of work, a few specific vehicles and printed details my board will have a great post-soviet feel.

Zona Alfa has a small yet sufficient bestiary for random monsters. You could actually be facing a variety of different types from light, medium, or large Critters to zombies or human bandits.

I jumped into my boxes of miniatures and bits. I planned on having pure radiation mutation monsters – but after reading Roadside Picnic, I wanted some mutated alien types as well.

I recently painted up rabid dogs and sprawl rats for Reality's Edge – so they'll be useful here as well. Then using some bits and finding some random boardgame models I made some more alien oriented mutants. These are old Mantic and Sedition War bits – I had for when I needed them. So great to see these getting into the light. The game call for 'bandits' when rolling for hot spot enemies. I didn't have any good bandits lying around. But from that good Lead Adventure deal I have some scruffy looking uniformed dudes. Large beards, CCCP armbands. The story I’ve come up with is that these guys are remnants of the Soviet Army, tasked with guarding The Zone back in the day. When the USSR broke down, these guys stayed. First to contain the Zone, knowing the dangers within - then later it just became the way it was. So now they are bandits. I still want to make some proper military units. 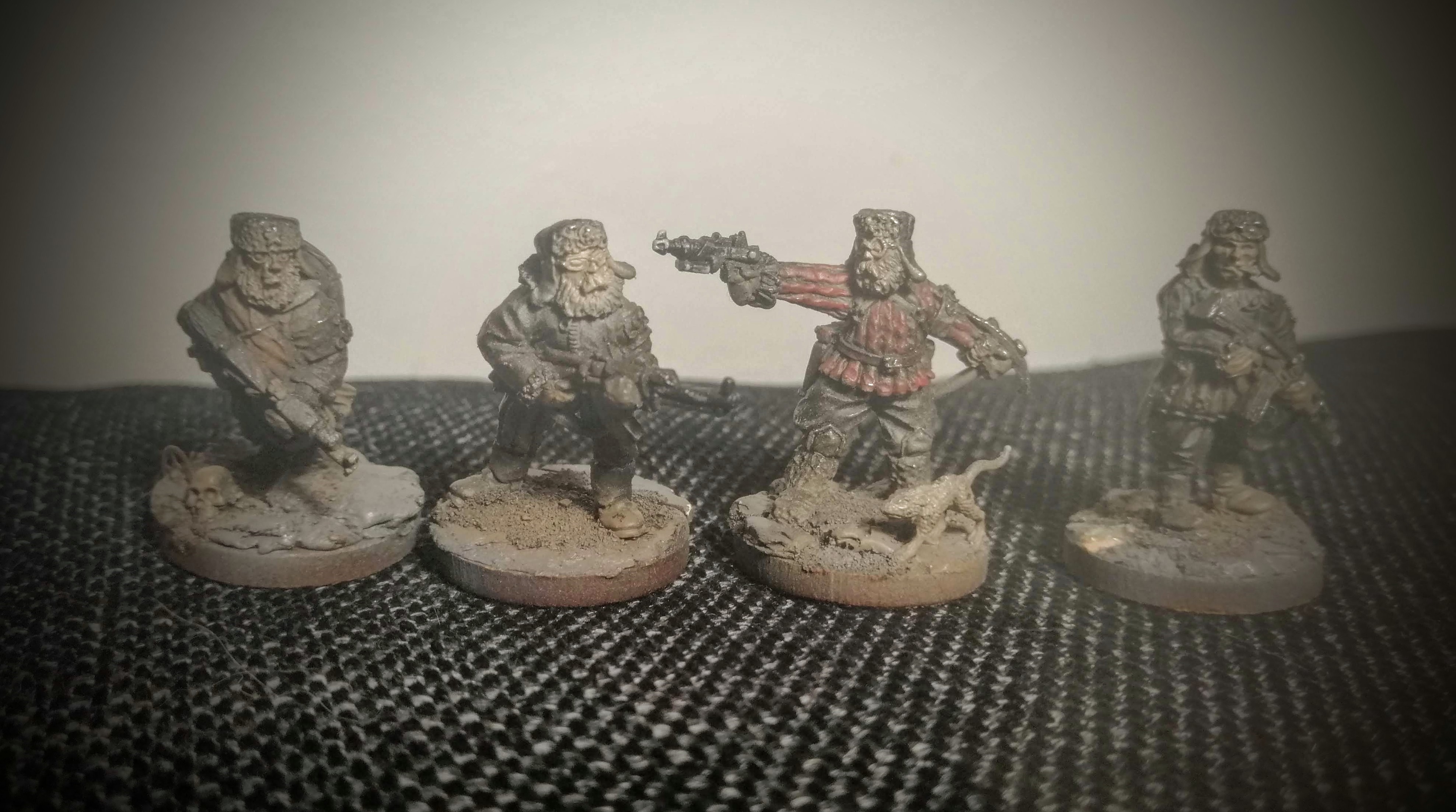 The book comes with a small introductory campaign, with some linked scenarios. I'll be playing these solo and will try to up the difficulty where needed. Since my crew will tackle enemies on their own, I think it'll work out fine. The first of these have the crew coming across a broken-down military convoy – searching for some data.

I found some old Mantic sci-fi zombies, added some modern military bits, and will paint them in military colors. I used thin paper strips with superglue to make slings for the guns, because I don't like zombies carrying things with their hands. And there we have it. My first crew, all the bestiary monsters I'll ever need, and a few terrain pieces to upgrade my board to post-apocalyptic Eastern-Bloc

Now to get some paint on these quickly, because I'm itching to get into The Zone and try my luck. Anomalies, artefacts, bad weather, aliens – it's gonna be good.

If you want to read more words on what I think about Zona Alfa? I've posted a book review on my own blog: Bloodbeards Garage.

Want to give Zona Alfa a try? Preorder your copy today!